Finding winners with free form and tips for the Missile Stakes 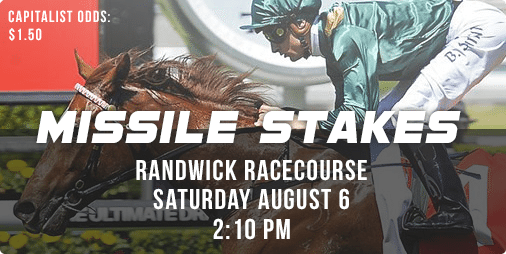 PUNTERS get a taste of what’s to come in spring with the $175,000 Group 2 Missile Stakes at Randwick this Saturday.

Bookmakers have it odds-on in the betting and punters have backed it strongly, but they will be waiting to see how heavy the conditions will be come Saturday.

Sign up to Sportsbet.com.au for the best value at Randwick which also features a quaddie, kicking off with the Rosebud at 2.50pm.

Harlem Lady picked up a long overdue win at Rosehill last start, but it will have to carry significantly more weight in this. It won carrying 55.5kg last start and rises to 61kg for this, but it does drop down in class and the wet track conditions won’t be an issue. Win chance at $2.90 after opening at $2.80.

The Chris Waller-trained Defrost My Heart has been specked at each way odds. The daughter of Fastnet Rock opened at $5 and is currently at $4.60 following a last start fourth behind Major Major at Randwick. It gets a 2kg claimer in the saddle and it should go close.

Back-to-back winner and the third Waller-trained runner in the field is Firebird Flyer. The consistent mare is in career-best form and it’s currently on the second line of betting at $4.40. It is more suited at midweek level, but don’t leave out of calculations.

Get On The Grange won back-to-back races before finishing off well behind Song And Laughter last start. The seven-year-old winner of nine races has been in great form and stepping up to this distance shouldn’t pose any problems. It opened at $7, drifted to $8, but has since settled firm at $7.50.

Last start winner More Than Fabulous has been fluctuating in the market all week and is currently at $3.70 after touching $3.20. The David Payne-trained gelding won easily at Canterbury last start and it looks the type which should progress through the grades. Unknown at this distance, but respect on its recent form.

Lie Direct finished 6.6 lengths away from Esteban last start, but that form stacks up beautifully and it could go close here. The son of Zabeel has been in consistent form with four consecutive placings and it almost scored over this distance two back. Gets in with 54kg and the $7.50 suggests it could win.

Last Witness is in good form having won its last two races. The Paul Perry-trained gelding won at Wyong before heading to Canterbury and winning again by a length. Its best form comes on wet tracks so conditions will suit and although it would prefer a slightly longer distance, it can’t be ruled out as it’s the fit runner. $4.80 with bookmakers.

On the first line of betting is Kangarilla Joy which is fresh up after running fifth in the Fireball Stakes last start. The Peter and Paul Snowden-trained mare has won three from six and its run for second in the Light Finger was quality. It is unbeaten in two fresh up starts and punters are getting a fair price at $3.

Hot Hit has been a little expensive for win backers of late, but it gets in well on the weights and it could run another solid placing. The Mark Mason-trained gelding has won eight from 22 which is a good record and although it’s yet to win against this class, it isn’t the worst betting option down at 53.5kg. $5.50 suggests it can win.

Appoint Percy resumes after a five-month spell and it usually runs well when fresh. The Luke Pepper-trained gelding has won and placed from two fresh up starts and it has form on heavy tracks. The son of Sir Percy won by 2.8 lengths on a heavy track at Albury and the wide draw should be ideal at this time of the day. Expect a good run at odds of $3.60.

Explosive Scene has been well backed at $4.80 following a fourth placing in a Highway Handicap at Rosehill last start. The six-year-old drops down in weight to 52kg which is a big assist with Andrew Adkins in the saddle and it has winning form on rain-affected tracks. Each way chance again here.

Attainment has been running strong races and bookmakers have it quoted on the third line of betting at $5.50. The Todd Smart-trained gelding has a poor winning record of two from 22, but it has 13 placings and its best form comes on heavy tracks. Could run into the money.

Golden Slipper winner Capitalist is the $1.50 favourite, but isn’t confirmed to start. The Snowden-trained colt doesn’t want a heavy track and its trainers will monitor the conditions as the week goes on. If it does run it’s the horse to beat as it will carry only 51.5kg. That’s an extremely light weight under the conditions and multi-bet punters will have Capitalist running through their bets. Standout horse of the day.

Rebel Dane will handle the conditions and it has been very well backed. The Gary Portelli-trained horse opened at $4.80 and is now at $4.40. It loves running in the wet and its trial efforts have been solid leading into this run. The seven-time winner goes well on this track and looks the biggest danger to the favourite.

Generalife is always around the mark whenever it runs and despite its poor record on this track, it does run well fresh up. The John O’Shea-trained gelding has won twice when fresh and it went close without winning last preparation. Its second placing in the Heffernan Stakes behind Famous Seamus was good and that form should stand up here. Chance at $9.

Peter and Paul Snowden will be looking to go back-to-back with Mediterranean. The Smart Missile colt scored an impressive maiden win at Canterbury last start and it looks likely to continue on with that this preparation. Its first two starts came in tough grades behind Good Standing and Souchez – that form is good for this level and punters have backed it at $2.30.

Thronum is on the second line of betting at $3.80 following an impressive start to its career. The Waterhouse/Bott-trained colt won its first two starts nicely with the second win coming by three lengths over Morton’s Fork and it didn’t have much luck last start. It missed the jump and fought well behind Tango Rain so consider here at a nice price.

Hair Trigger produced a big finish for third behind Tango Rain and Thronum last start. The James Cummings-trained gelding won its only start on a slow track which is a good sign and it gets in well on the weights for this. It carries only 55.5kg and money has come for it at $4.40 after opening at $4.60.

Imported runner Quick Defense broke through for the win at Canterbury last start and it might continue its run here. The Chris Waller-trained gelding won by 3.5 lengths in an impressive display and handling the wet ground shouldn’t be a problem. Draws the rail and it has been well supported at $3.60.

King’s Officer has rocketed through the grades since winning back-to-back Highway Handicap’s earlier this year. It has now made it four straight and its best attribute is the devastating turn-of-foot. It went straight past a solid rating 83 field last start and more wins should ensue. Goes into the mix here at $5.

Dark Eyes scored an overdue win last start at Rosehill after some luckless efforts in the past. The Waterhouse/Bott-trained gelding found itself in a forward position last start which could be its new tactics. Waterhouse loves running them in front so expect it to be on the speed from barrier three. Each way chance at $7.

Dixie Blossoms is a talented four-year-old which won its only fresh up start. The Ron Quinton-trained mare finished second behind Single Gaze in the Keith Nolan last start and it defeated the highly-touted Tsaritsa at Warwick Farm second up. Looks a major chance in this at $4.

Tremor almost scored at Rosehill last start when second behind Interstellar. The John O’Shea-trained mare goes best on rain-affected tracks and it should be ready to fire fourth up this campaign. Brenton Avdulla takes the ride at 54kg which is a big plus. Second favourite at $5.

Typhoon Jolie needed the run last start when fourth at Canterbury and it should improve second up. It has won twice second up and twice on a heavy track, so the $9 looks like a nice each way price and it could sneak into the minor money.

Cannyescent has won both starts fresh up and it has form on rain-affected tracks. The four-year-old by Canny Lad is having its fifth consecutive start at Randwick where it has won one race, but its other runs have come in tough company and it should find this easier. Tough draw, but it might be best to be on the outside come race 9. Each way chance at $6.50.

Burning Passion did it easy last start when winning by 3.5 lengths. The James Cummings-trained gelding has won twice on a heavy track and despite sitting on the speed three wide last start, it still managed to find a big kick late. Punters have come for it at $2.70 and it should start as the favourite.

Chetwood kicked off its career with a 3.8-length win at Canterbury before running third behind Brigadoon Rise and again to Lady Sniper in the Gosford Guineas. The Godolphin gelding has won both trials this preparation and it should be able to find the lead from barrier one. It opened at $6 and is now at $5.50 so watch for any late moves.