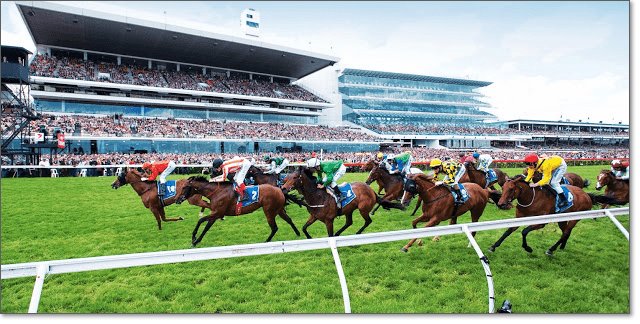 The feature race at Flemington is in honour of three-time Melbourne Cup winner Makybe Diva and the field is an absolute cracker.

17 entrants and of them include the likes of Boban, Fawkner, Mongolian Khan, Rising Romance and Volkstok’n’barrell, just to name a few.

The $400,000 feature is a key lead-in to the Melbourne Spring carnival and the winner will surely shorten in markets for the Cox Plate, Caulfield Cup and Melbourne Cup.

Sign up to Sportsbet.com.au for their Makybe Diva Stakes special offer.

Boban couldn’t have been more impressive when winning the Group 1 Memsie Stakes last time out at Caulfield. The Chris Waller-trained gelding came along the inside of runners in a beautiful Glyn Schofield ride to score by a nose and it will only improve with more racing. It’s a three-time winner at this distance and chances are Boban will be in the thick of the finish again. $4.20 out to $4.40.

Fawkner makes it eagerly awaited return and it usually runs well in a fresh up state. The Robert Hickmott-trained eight-year-old has won and placed twice when fresh and it finished second in this race last year before running second in the Cox Plate. It has a big campaign ahead of it and having won five times at Flemington will help its chances here. Punters can get $6 with bookmakers.

Alpine Eagle had the blinking light on last start after flashing home late for second at Morphettville. The lightly-tried four-year-old is unbeaten second up and it showed last spring that it has a touch of class. The Tony McEvoy-trained runner is running against some of the best horses in Australia, so things won’t be easy, but the market suggests it has a fine chance. It opened at $7 and has been backed into $6.50.

Apart from Petis Filous which we will examine later, the Michael Moroney-trained Serenade is the only other runner in single figures. The three-year-old filly broke its maiden status at Canterbury five starts back by five lengths and it has run well in behind some nice types since then. It ran seventh in the Golden Slipper and was running on strongly. It has drawn wide for this, but it should be respected at odds of $9.50.

Petis Filous has looked very special in three runs to date. The Ciaron Maher-trained filly is unbeaten in three starts and all three wins have come very easily. The daughter of Street Boss won by six lengths on debut before heading to Moonee Valley and winning by two lengths. It was taken on in front last start in the Group 3 Quizette at Caulfield, but it kicked strongly for a 1.25-length win over quality runner Jalan Jalan. As expected, its opening price of $2.15 has been quickly snapped up and it’s currently at $1.85.

Payroll had a big wrap on it after winning by 3.25 lengths on debut over a subsequent two-time winner The Barrister. It then went to Morphettville for the Breeders’ Stakes where it was unlucky in finishing fifth and that bad luck continued to the Listed Redoute’s Choice at Caulfield in May. It was slow and produced a very big run behind Black Vanquish. That run indicated ability and it should provide a place chance at odds of $11 for the win.

The form line of Odyssey Moon doesn’t instill confidence, but all of those runs have come in very tough races and this is much easier. The Rodney Northam-trained colt has feature placings in the Group 2 Pago Pago, Group 1 Sires’ Produce and it finished third in the Listed McKenzie Stakes last start at Moonee Valley. It does rise in weight to 58kg which concerns, but punters are keen to take the $7 available.

Prince Of Brooklyn was extremely disappointing when running as the $3.20 favourite last start in the Group 3 McNeil Stakes. The Mick Price-trained colt was unbeaten in its first two career starts where it defeated Badajoz by 2.25 lengths and then it defeated the classy El Greco by 1.75 lengths. It gets the inside draw which helps and the $6 available is a good each way price as it opened at $5.50.

El Greco was unlucky last time out when caught out four wide and it has drawn wide in barrier 11 here. The Peter Moody-trained runner looked good prior when winning at Flemington four starts back and it went close in two starts following. The $7 available is the best price you will get for El Greco so consider here against a quality field.

Ready For Victory opened very short at $2.80, but it has since drifted out a full point to $3.80 which is concerning. The Mick Price-trained colt resumed with a solid placing in the Group 3 McNeil Stakes behind Gold Symphony and its only bad run came in the Group 1 Sires’ Produce. Its manners cost it a win in the Golden Slipper, but it should be competitive against this opposition.

The best backed runner has been Black Vanquish which is fresh up after winning its last two starts. The Tom Hughes-trained runner defeated the likes of My Poppette and Payroll and the inside draw will give it every opportunity to win this in a fresh up state. It opened well over the odds at $8.50 and has since been backed into $6. Still a good price available for a horse that should strengthen throughout the spring.

Raphael’s Cat comes over from Sydney with very good form. Gai Waterhouse rarely travels her horses without giving them a chance of winning and its last start win indicated some serious ability. The son of Redoute’s Choice will likely head forward and try lead all the way. Blake Shinn has taken the ride and the $6 available looks like a solid each way price.

Cosmic Endeavour is a Group 1 winner that was very unlucky when resuming at Caulfield. The Gai Waterhouse-trained mare finished seventh in the Group 3 Cockram, but only 1.5 lengths behind Madam Gangster. It has won seven from 20 and the wider Flemington track should suit its style more so than Caulfield. It has won three from four at this distance and it is currently paying $7 for the win.

Noble Protector has won twice fresh up and it ran second in a recent trial. The Robert Smerdon-trained import has looked very good since arriving in Australia by winning the Group 3 Matron Stakes and the Group 2 Sunline Stakes. It finished third in the Queen of the Turf at Randwick in the Autumn and it probably should have won. Craig Williams rides from barrier one and punters have latched onto the $3.70.

Vezalay was solid when finishing third last time out and it will strip fitter after two runs in this campaign. The lightly-tried mare is relatively inconsistent, but it has talent on its day and it is getting respected in the market. It opened at $9 and has been backed in slightly to $8.50. Respect it here against a very tough field.