Finding winners and quaddie tips at the Kingston Town Classic 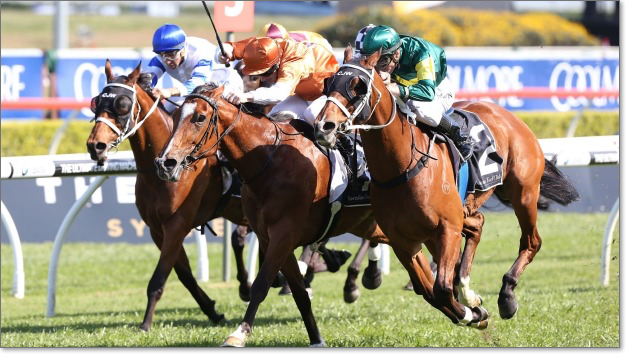 A STELLAR field has assembled for the $1 million Group 1 Kingston Town Classic at Ascot this Saturday.

The very best from Perth will take on the quality international horse Magic Artist in their bid to protect their home soil.

Trainer Grant Williams lines up two of his stables best with Delicacy and the unbeaten three-year-old Perfect Reflection, which punters have been keen to back all week. The More Than Ready filly hasn’t tasted defeat in four starts and even though it’s facing a massive rise in class, carrying only 50kg will have its advantages.

Plenty of other quality races on the nine-race card which includes the R.S Crawford Stakes where impressive last start winner Sheidel takes on the talented Silverstream.

The Adam Durrant-trained Battle Torque was a stylish back-to-back winner and it was everything going its way for this. The three-year-old gets the inside draw at a light weight and it now gets a senior jockey [Peter Hall] in the saddle. It looks a natural improver and the small field of only seven runners will suit nicely. Will be well backed.

Arcadia Dream was a very unlucky runner in the W.A Guineas when finishing 10th, but punters should disregard that performance. The three-year-old filly was flying before being shut out of business at the the 100-metre mark and it shouldn’t suffer the same fate in such a small field. Its form prior included a group 3 placing behind Perfect Reflection and that form should stack up beautifully for this. Big danger, especially at 53kg.

Secret Doubt should be respected based off its breeding. The Neville Parnham-trained filly is by Not a Single Doubt which breeds very fast sprinters and it won well enough three starts back to suggest taking in this. It was only two lengths behind Battle Torque last start, but it should be paying a handy place price and that’s where punters will get the value.

Lite’n in My Veins has had three trials for one win and international jockey Douglas Whyte takes the ride which is a big bonus. The Fred Kersley-trained gelding is sure to be well educated and jumping from barrier two will be of benefit. The tote will be your best guide to its winning chances.

Total Eclipse was disappointing when fourth last start, but it was taking on the older horses and it should enjoy running against its own age grade. It finished fifth behind Blackwood in the Burgess Queen Stakes in its start prior and it won its maiden the start prior. It should be well favoured in this with William Pike in the saddle from barrier one.

Lord Conrad is an experienced three-year-old which took on the older rivals last start and was found wanting. It hasn’t won since its two-year-old campaign where it put back-to-back wins together and that should give punters plenty of confidence. Damien Oliver jumps in the saddle and that’s a good indication of its ability.

Young Lionel won the Listed Northam Cup three starts back and it has since placed in two quality races. It finished second in the Ascot Gold Cup behind Drive West and it followed that up with a solid effort for third in the Tattersall’s last start on this track. It looks well suited to this grade and a top run is expected.

Rebelson is a professional gelding having its 38th start. The Darren McAuliffe-trained six-year-old loomed to win last time out, but was found wanting over the last 100 metres. It goes up in distance for this which might not be ideal based on its last run, but it should be considered with William Pike in the saddle and it has a good winning strike rate. Watch the market closely.

Drive West couldn’t have been more disappointing when finishing last at Ascot, but it could rebound based on its previous form. The Joe Miller-trained gelding won the Ascot Gold Cup by 1.5 lengths over Young Lionel and that form is an obvious guide for this. It finished third behind the highly-touted Kia Ora Koutou prior and it has a strong chance of turning its form around.

Keysbrook is fresh up having last raced in the Listed Balmont Classic where it finished fifth behind Dark Musket. The Phil Humann-trained mare prefers longer distances, but it has won and placed at the 1400 metres and it has placed four times on this track. Its winning strike rate isn’t flash, having only one once from 20 starts, but it could provide some place value in this.

Wink And A Nod was no match for the quality of the Group 1 Railway Stakes last start where it finished 12th, but all of its prior form came in behind Black Heart Bart and this field is much easier. It finished second in the Group 3 Northerly Stakes at Ascot and we’re expecting it to be very well backed with Douglas Whyte in the saddle. One for the multi-bets.

Ideal Image was game in defeat behind Sheidel last time out and it should settle closer to the pace from the inside barrier. The well-bred More Than Ready mare has plenty of potential on its day, having won four from 11, and William Pike hasn’t left the saddle. This distance suits nicely as it will have more time to wind up and it’s a win chance here.

Silverstream ended its run of three consecutive wins with a four placing last start, but that came in the Group 1 Winterbottom Stakes behind multiple group 1 winner Buffering. The Grant Williams-trained mare has won five from nine and its only poor runs have come in tough races. This looks easier than its recent racing and from barrier two with Pike riding at 53kg, it should be well respected in the betting.

Sheildel was a classy winner last start at Ascot when it won the Listed Jungle Mist by a half-length over Ideal Image. The David Harrison-trained mare has won nine from 13 with two placings and that consistency has given punters the confidence to back it solidly in most of its starts. It has beaten the likes of Wink And A Nod and Rebel King, so this field looks winnable and Silverstream appears its main danger.

Shining Knight was very unlucky in the Group 1 Winterbottom behind Buffering when it finished sixth. It settled back and didn’t get much luck in the straight. The experienced seven-year-old has won seven from 26 which includes four on this track and it has solid second up form. There are no slouches in this field and it should pay a nice each way quote.

Black Heart Bart is a true professional and a win here would take it past the $1 million career earnings mark. The Vaughn Sigley-trained gelding seems like it has been around forever, but it’s only a five-year-old having its 25th start. It finished fourth in the Group 1 Railway Stakes behind Good Project and it was putting in the big bounds late. Its form prior included three straight wins and it is a six-time winner on this track. Strong field here, but it looks a natural inclusion in multiples.

Magic Artist is the only international runner in the field and punters have backed it into favouritism. The Andreas Wohler-trained horse has had two Australian runs for two fourths, including a very unlucky run in the Group 1 Mackinnon when fresh up. It ran on nicely last start behind Turn Me Loose in the Group 1 Emirates and based on form, it deserves to be the favourite. Strong winning chance from the inside barrier with Oliver riding.

It’s not easy for a three-year-old filly to win the Kingston Town Classic, but Perfect Reflection will carry only 50kg and that should be respected. The Grant Williams-trained filly is unbeaten in four starts, but it faces a steep rise in class for this and it will have to navigate from a tricky barrier draw of 12. It opened as the favourite earlier this week, but punters are letting it drift in the market. Could be the next big star out of Perth, but we prefer to just watch it at this stage.