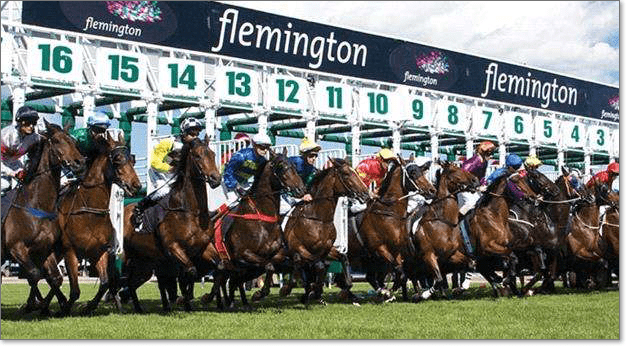 THE qualification races have been run on Derby day and the final 24 runners for the 2015 Melbourne Cup are confirmed.

Plenty of controversy surrounded the final few entrants which included the scratching of the Robert Hickmott-trained Amralah.

The silver lining is that Amralah’s exclusion made way for stablemate The United States in bizarre circumstances and it has been very well supported in the market at $21.

Gai Waterhouse gained another runner in the field when import Excess Knowledge edged out Zanteca in the final stride. The six-year-old German import had to survive a protest from the connections of Zanteca, which looked to have a serious case, but ultimately the stewards held to the original decision.

Excess Knowledge joins The Offer in the Cup for Waterhouse. The Offer won the Group 1 Sydney Cup in 2014 and was quickly labeled the favourite, but it failed to show any form and was subsequently left out of the field later that year. To its credit, The Offer has battled back after winning the Bendigo Cup on Wednesday, it looks a solid winning chance with some moisture in the track.

There are 11 overseas-trained runners in the field and only one Australian-bred thoroughbred which makes for a truly international race that will stop the nation this Tuesday at 3.00pm.

The Melbourne Cup barrier draw was held Saturday night at Flemington Racecourse and we have all the info and latest market updates available.

Comments from the Melbourne Cup connections

Champion trainer Saeed Bin Suroor has been trying to win the Melbourne Cup for longer than we can remember, and this year he is represented by Sky Hunter. The Godolphin gelding is coming into the Cup after finishing third in the Group 3 Legacy Cup and Bin Suroor believes it has a strong winning chance at $41 with CrownBet.com.au.

When asked about how much a Melbourne Cup win would mean to owner Sheikh Mohammed bin Al Maktoum, Bin Suroor said it would affect the entire nation of the U.A.E.

“It’s very important to Sheikh Mohammed and people in the U.A.E,” he said.

“It’s a tough race but we hope he can run well.”

Representing the Australian sector of Goldolphin was former champion jockey Darren Beadman who has Hartnell entered in the Cup. Hartnell drew barrier 17, but Beadman isn’t worried about the barrier.

“Not worried at all,” Beadman said. “James [McDonald] will come out on him neutral and hope to get on someone’s back and get him into the race.

The Irish-bred five-year-old burst onto the scene last year, but it hasn’t been able to win since taking out the Group 1 BMW in March.

“He’s been trained specifically for the Melbourne Cup,” Beadman said.

“His win in the BMW was outstanding. He’s got a strong spirit and we’re quite bullish about him. We have a lot of confidence in this horse and he’s got a lovely profile.”

“The Moonee Valley track isn’t his track,” Beadman added. “He’s better off at a bigger track like Flemington.”

Beadman was asked if he couldn’t ride Hartnell in a hypothetical situation, which Melbourne Cup horse would he ride.

“I saw Our Ivanhowe work this morning at Flemington and it was nice sneaky work.”

Lee Freedman was on hand to discuss the chances of Our Ivanhowe which turned in a great performance for third in the Caulfield Cup, but drawing barrier 22 wasn’t ideal.

“The horse is going great, couldn’t be happier,” Freedman said.

“Barriers are immaterial in Melbourne Cups. He’s set to peak this week and if we get him right he’ll win.

“He’s very lightly raced and a very exciting horse. I’d love to have 2kg less, but everyone in the field would too.”

Our Ivanhowe is currently well-favoured in the market at $17 with Sportsbet.com.au.

Willie Mullins spoke about his runner Max Dynamite, which has competed in three hurdle races from its past five starts.

The six-year-old finished second in the Galway Hurdle before winning the Group 2 Lonsdale Cup at York which prompted the connections to travel to Australia for the Melbourne Cup.

“It’s a mega race [Melbourne Cup], possibly the biggest race in the world at the moment,” Mullins said.

“I’m happy with the draw [2] and I think we’ve been happy with how the horse has settled in and trained.

“He appeared great so fingers crossed. Lots of things have gone right for us and the form is working out. Now we just need Frankie [Dettori] to come off the plane from the Breeders’ Cup in good form.”

Nick Williams had an interesting day after being forced to scratch Amralah, but he and father Lloyd Williams are still represented by three Melbourne Cup runners.

The United States made the field thanks to Amralah’s exclusion and Williams thinks it’s a great winning chance this Tuesday.

“It’s been a day of frustration, but I’m looking forward to one of the truly great races in the world,” Williams said.

“He’s [The United States] really shown us after his Moonee Valley Cup win, the way he’s come on and trained on, he’s shown us he needs to run in this race this year.

“If you look at his preparation, apart from some bad luck, he’s been flawless.

“Obviously at 52kg it’s difficult to find jockeys, but we’re lucky to get Joao.”

Williams is also involved with two Aidan O’Brien-trained internationals after the connections offered the Williams’ shares in two runners earlier this year.

Bondi Beach and Kingfisher are two quality Europeans which both have strong winning chances. Bondi Beach is currently the more-favoured runner at $17 with Kingfisher at a value quote of $26.

“He’s a wonderful horse,” Williams said about Bondi Beach. “We’re hoping to have a lot of fun with him over the next few seasons.

“I think Brett Prebble will give him a wonderful ride.”

Kingfisher was disappointing when finishing 43 lengths behind the Irish St. Leger winner, but its form prior was solid and it finished second behind Trip To Paris in the Gold Cup at Ascot.

“He’s done a bit more work than Bondi Beach,” Williams said. “He didn’t travel the best, but in the last two weeks he’s come into it, he’s flying.

“If he finds his best form he’ll be in the finish for sure.”

Everyone’s favourite international is Red Cadeaux and it’s back for another tilt at the Cup. Trainer Ed Dunlop also has Trip To Paris engaged after a stunning performance for second in the Caulfield Cup.

“The rain and the tempo of the race will be important.”

Red Cadeaux has finished second in three Melbourne Cups and now as a 10-year-old it looks just as strong as ever. Dunlop knows he has an older horse on his hands, but drawing barrier eight will help.

“I’m happy, he’s got a good draw this year,” he said. “I think he’s good, a year older, but the boys are happy with how he’s going.

“One’s a younger horse, but one is very good around here. I’d like to win more than anything. We’ve had a few shots, five second’s in Group 1’s, but we’ll see how we go on Tuesday.”