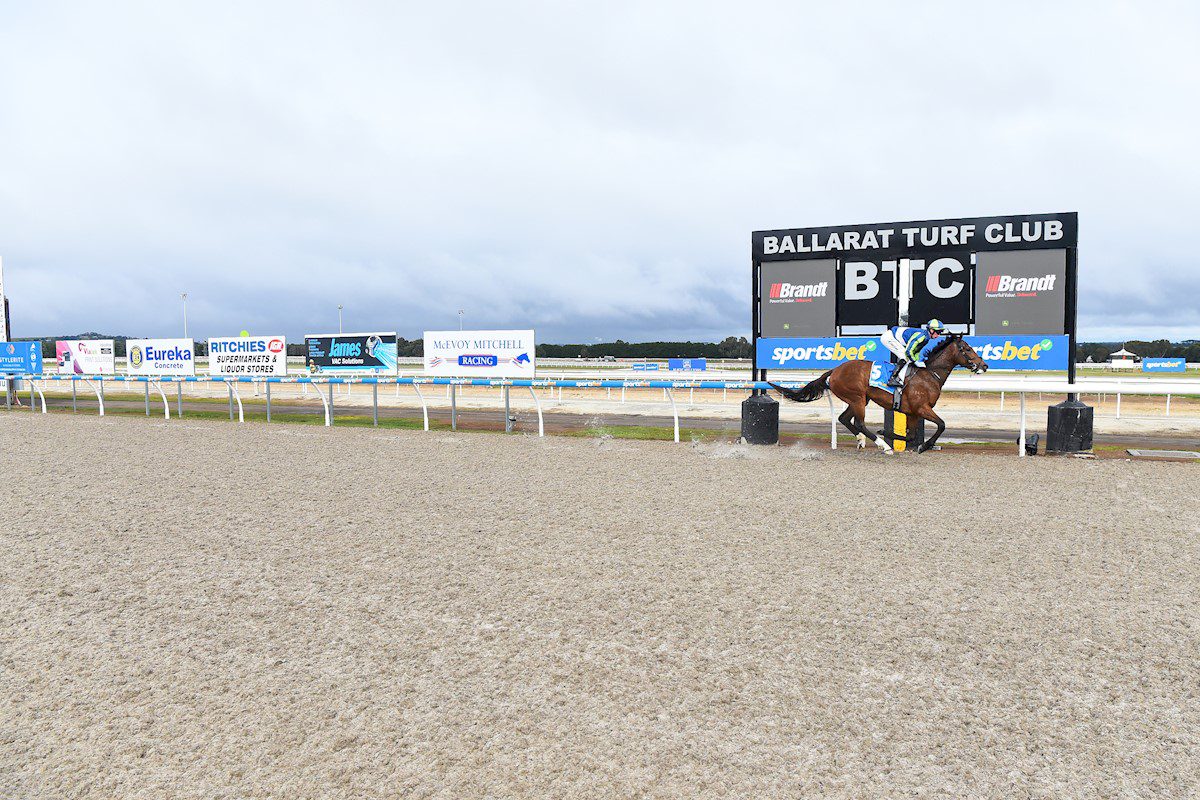 Horses don’t win much easier than what English Riviera did in the opening race at Ballarat on Friday.

The three-year-old filly started a very short -2500 on the Victorian tote in her first run for the preparation, and she never once looked like getting beaten.

Ridden by Damien Thornton, English Riviera jumped well from barrier two, controlled the race and scooted clear upon straightening, putting up a margin of 10 lengths without really being asked for an effort.

The Tony & Calvin McEvoy-trained runner boasted some very good two-year-old form from the summer; she finished just one and a half lengths away in sixth place in the Group 1 Blue Diamond Stakes at start three, following minor placings at Flemington and in the Blue Diamond Prelude (F) at Caulfield.

Co-trainer Tony McEvoy told Racing.com post-race that while he expected English Riviera to justify her odds-on quote, he didn’t think she would put her rivals to the sword in the fashion that she did.

“We’ve got so much time for her,” McEvoy said.

“We placed her so aggressively at her first preparation and she raced beautifully.

“The ownership group were fantastic. They just said ‘go low, take your time, develop her’.

“We know she’s and that was just lovely for her today. She, along with me, will both eat up tonight.

“There was certainly no intention to do that, but he (Thornton) was kind to her. She’s just a really good, talented filly and I’m really looking forward to see where she can take us.”

Given her debut second at Flemington, McEvoy has earmarked the Cap D’Antibes Stakes over 1100m at Flemington on September 10 for her next start.

The daughter of Deep Field has plenty of experience in black-type races, so the trainer thinks the Listed event will not be out of her reach.

“She’s had experience down the straight at Flemington and ran really well and there’s a race coming up called the Cap D’Antibes (Stakes) – it’s a month away,” he said.

“I think the way her coat is moving, I think the month is perfect and it is at 1100m down the straight, so it’s probably the logical race.

Winning rider Thornton said the victory was “almost cruel” to the other horses in the race, as his mount continued to extend and clear out with ease.

“I could’ve rode her backwards and she would’ve still won – it was almost cruel in the end,” he said.

“It’s good to see her winning and she can go back to bigger and better things.”

English Riviera is now rated a +5000 chance for the Thousand Guineas and a +2500 hope in the Coolmore Stud Stakes.