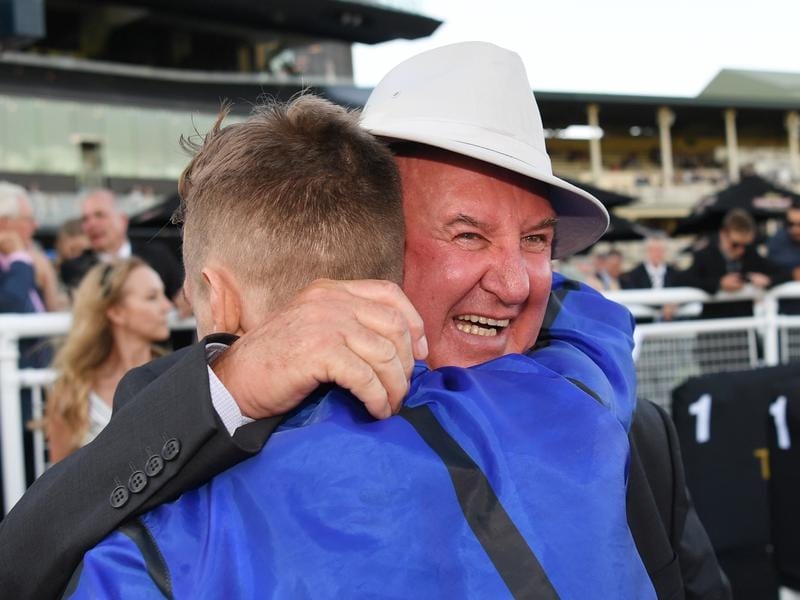 It has taken Pat Webster five decades to become a Group One-winning trainer and there have been a lot of laughs and some tough times along the way.

But throughout his life Webster’s affable nature and positive outlook on life have given him the strength to rise up when others might have fallen.

As the son of a drover and part-time horse trainer called Spider, Webster had few comforts as a child in country NSW, but he did not really register that until asked to look back on his life.

As he and the best horse to walk through his stable doors, Happy Clapper, near the ends of their careers, Webster has done just that – telling his story with the help of Alan Whitaker in a book he has called Don’t Die Wondering.

A bush jockey who came to town, Webster became a trainer after injury and weight put paid to riding.

In between he had a stint as a painter and docker, married the love of his life Chrissy, and had three beautiful children, Patrick jr, Wayne and Diane.

Webster launched his book on Tuesday surrounded by friends and colleagues, his children and their children, in the old jockeys’ room at Randwick, part of the racecourse which is in his blood and the scene of Happy Clapper’s three Group One victories.

Sydney’s champion trainer Chris Waller was on hand to testify to the Websters’ generosity to an 18-year-old strapper from New Zealand who they would invite for dinner and companionship.

The Websters are well known for helping others and taking them into their home with Pat a certified drug and alcohol counsellor for Racing NSW.

It is the story of Patrick jr that forms the fabric for their work with jockeys, trainers and anyone else who needs help.

Their eldest son has allowed his father to share his struggles – his 20-year battle with heroin addiction and time spent in jail while Pat and Chrissy raised Jack, their grandson.

Patrick jr has come out the other side and his father uses his experience to be a sounding board for others.

“When you have been through it you know what it’s like,” Pat said.

The work Webster does with jockeys and the Racing NSW support program, Racing Mates, is what will keep him around racing rather than full-time retirement on his Central Coast farm.

“I still feel I have a lot to offer racing but in my heart I think it’s more with the work I do counselling and mentoring apprentices and being an ambassador for Racing Mates. That’s why when Clapper is finished, I’ll probably finish too, he said.

Don’t Die Wondering costs $30 and the money from the book sales will go to the Salvation Army.

“I found the Sallies, when my family had troubles, they were the ones who came to the party,” Webster said.