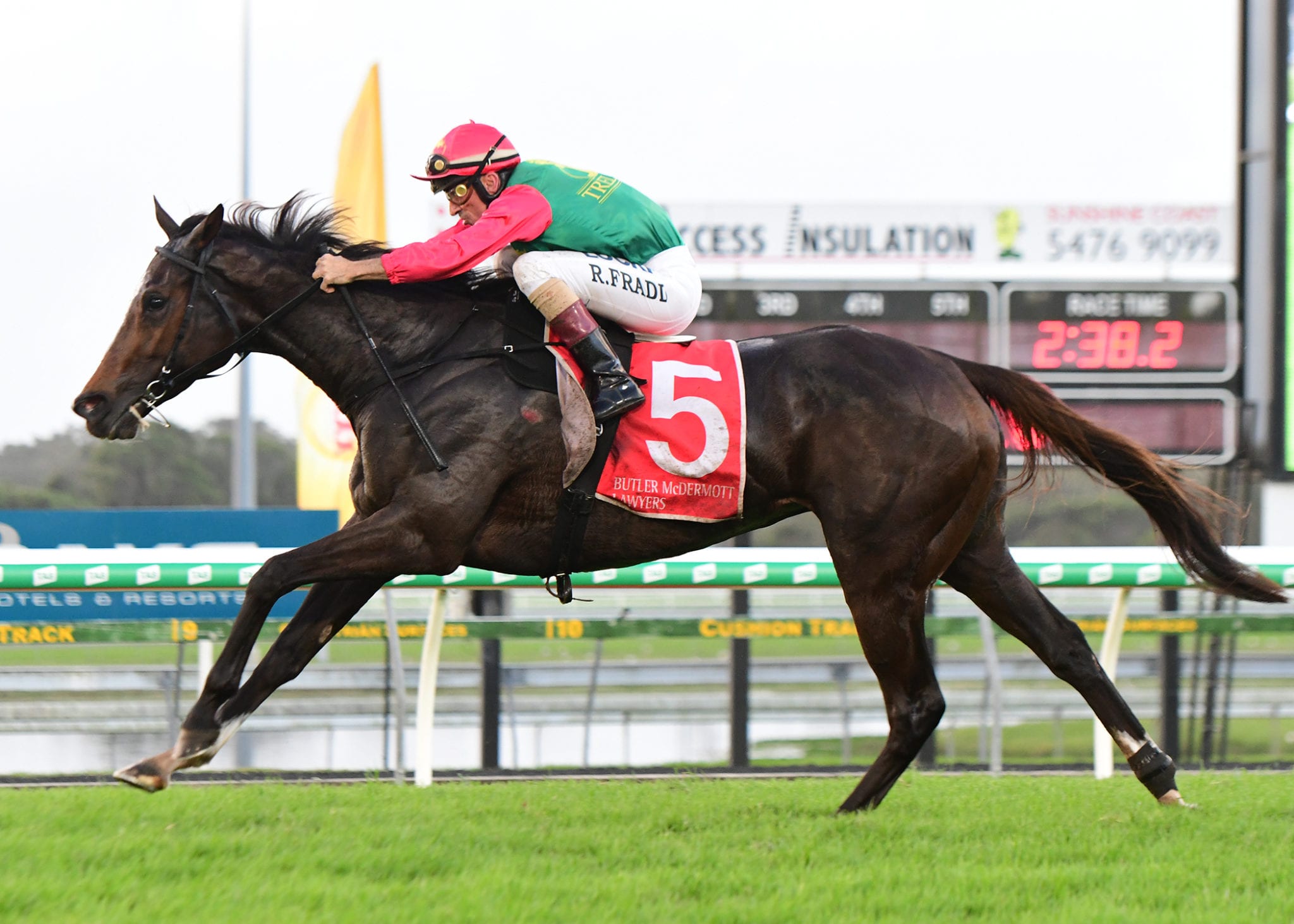 Leading international bloodstock agent Paul Moroney has struck gold once again. Moroney pioneered sourcing German bloodlines for New Zealand clients back in the 1980’s and more than 30 years later his judgment of the European stock is still paying off.

“I think I was one of the first to buy German bloodlines into New Zealand,” he said. “In 1986, on behalf of the Cambridge Stud partnership, I bought a half-sister to the previous year’s Epsom Derby (Group 1, 2400m) winner Slip Anchor. “Her name was Set Sail and she ended up being the Grandam of Auckland Cup (Group 1, 3200m) winner Upsetthym. “It was unheard of to be importing German families into New Zealand way back then.”

Three years ago Moroney selected the German-bred Galileo mare Igraine as a racing and breeding proposition for clients Trelawney Stud out of the Tattersalls December Sale, and that purchase looks to have been a masterstroke for the New Zealand breeding industry. Her success on the track led to two other New Zealand breeders purchasing half-sisters to Igraine, and all three were elated when watching their half-brother In Swoop take out the Group 1 Deutsches Derby (2400m) at Hamburg on Sunday.

Reflecting on his initial purchase of Igraine, Moroney said he was surprised he was able to secure the daughter of Group 1 Preis der Diana (2200m) winner Iota. “I bought Igraine for Trelawney Stud at the December Sales in 2017. She was a great buy, a Galileo mare out of an Oaks winner, and a half-sister to a German Group 1 winner already.

“We paid 65,000 Guineas for her. At the time I didn’t think we would be able to buy her, I thought she would make more, but it was very early on day one and people overestimated what she would bring and I was Johnny-on-the-spot and we ended up getting her. “I could have turned a profit on her very quickly, but she was bought for Trelawney and they were delighted to have got her.”

Being a lightly raced mare, Moroney advised Trelawney Stud principals Brent and Cherry Taylor to persevere with her racing career in New Zealand, and that decision was the catalyst to bring two of her half-sisters to New Zealand. “She was very lightly raced for a four-year-old mare,” Moroney said. “In her previous start she had finished fifth in a very strong Listed race, and she would have been third in another stride.

“The winner of that race ended up going on and being a Grade One winner in America the following year, so it was a very strong form reference. “We bought her and I said she has still got some racing left in her, she is a gorgeous type. So they took her out to New Zealand and were lucky to get a Group 3 win with her and a Listed win in Australia. “She is a very valuable mare now and is in-foal to Fastnet Rock.”

With Igraine performing so well on the track, Moroney kept an eye on her siblings and enquired about purchasing her half-sister Indah. “Once Igraine got to New Zealand and started showing promise, I think she had won two of her first three starts, I went back to one of my associates in Germany and said to him I had been following her half-sister Indah and was there any chance we could buy her as well,” Moroney said.

“He got hold of the owners and they said that she was for sale and put a price on her. “The Sunlight Trust people, Murray and Marg Hardy and Paddy Preston, had asked me to find some bloodstock for them and had shown interest in buying something out of Europe. “I told them I had found a cracking racing come breeding proposition for them. She had contested two Group races at her previous two starts and although beaten I said I believe there is racing left in her, but more importantly she is from a great family.

“They were delighted that I had found her and they went ahead and bought her. They took her out to New Zealand and she ended up winning as well. “They decided last spring to get her in-foal. She is due to foal shortly to Vadamos.”

Valachi Downs principals Kevin and Jo Hickman were the third New Zealand party to be celebrating In Swoop’s Derby success on Sunday, having purchased his half-sister Iojo. “Valachi Downs picked up another half-sister, Iojo, a Giant’s Causeway mare who I believe was empty at the time,” Moroney said. “They found her through another agent once Igraine had become a Group winner in New Zealand.

“They have been recipients of the luck as well and it’s great that three relatively young mares from a great German family are going to be breeding in New Zealand for many years to come and have fillies go to stud. “It’s a brand new bloodline for New Zealand that could create a dynasty given the high-class of that female line.”

While Sunday’s result was great for the New Zealand breeding industry, Moroney was also taking a keen interest in the race for other reasons, having made offers to purchase both In Swoop and runner-up Torquator Tasso. “I had been following In Swoop’s progress and made an attempt to buy him in France five weeks ago, but they wanted to run him in some Group races,” Moroney said.

“He then placed in a Group 3 in France and his next start he won the German Derby, so I don’t think I will be able to buy him now. “I also had gained an option on the horse that was runner-up (Torquator Tasso) last night. “I saw him win his maiden and thought it was in spectacular fashion. The turn of foot he showed was something out of the ordinary. “I ended up gaining an option on the horse, with the owner prepared to stay in for 25 percent, to buy him for an Australian group. But unfortunately the group was talked out of it by somebody else whose opinion they sought.

“When I watched the race live last night and saw what was unfolding and the runner-up hitting the front and looking like the winner, I was a little bit white-faced for a few strides, and then I saw what was getting up on his inside and winning the race. “It suddenly turned from despair to delight. It was a mixed feeling, but I am absolutely delighted for the connections of all three mares who have found their way down to New Zealand as half-sisters to a second German Group 1 winner, it is quite incredible. “They are all very valuable, solid backers of the New Zealand industry, and it is great that they have got a result like that.”

With life as a bloodstock agent, Moroney has been used to living on the road for some time, and that is where he was when watching the Derby. Based in Victoria, Moroney has spent the last few weeks in New South Wales in preparation to be able to cross into Queensland later this week to attend a sale on the Gold Coast.

“My partner Catheryne and I have been living in Melbourne for the last 18-months, but we are currently in the Hunter Valley,” he said. “We have been up here for two weeks so that we could then get across the border for the Magic Millions Sales. “We read between the lines that things were going to change quickly (in Victoria), so we jumped on the plane on July 1 and we have spent the last 10 days in the Hunter Valley.”

The COVID-19 pandemic has been a major issue for many businesses and Moroney’s is no different. “I would normally have gone up to Royal Ascot and stayed through to the July Sale and then come back and gone back up for the October yearling sale around Ireland and England and then stayed on for the horses in training sale,” he said. “I would have come back for the Melbourne Spring Carnival and then gone back up for the breeding stock sales in Ireland, England, and France, but under the current situation it looks highly unlikely that any of that will be happening this year and possibly for the foreseeable future.”

While it has been a major hurdle, Moroney said that he is still able to continue to work internationally through the strong network he has established over several decades travelling the world. “Fortunately, I have been doing this for a long time,” he said. “I have been doing bloodstock consultancy since 1984 and on my own from 1990. “I am well-travelled and I have some great connections up north. I have people that I trust, and I trust their eye, their business ethics, and because of that I have got the ability to carry on and get some business done if there are people there who want the business to be done.”