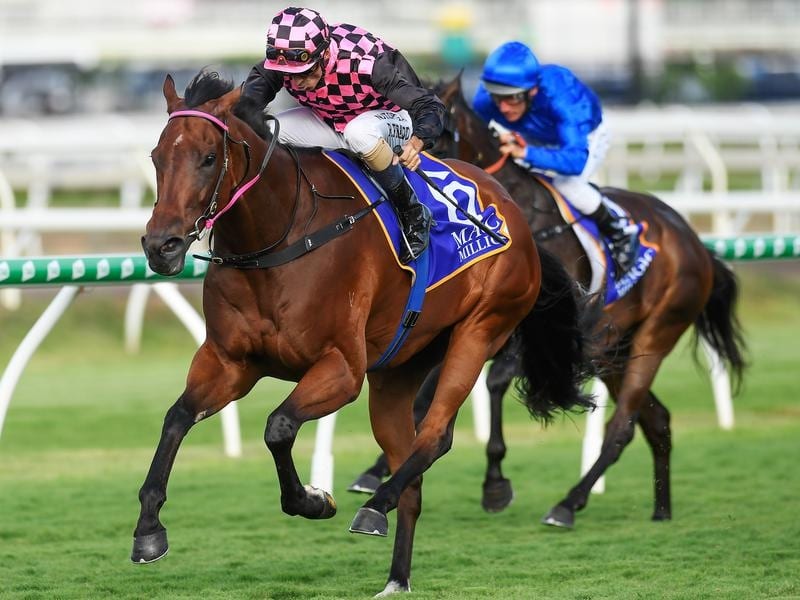 Robert Heathcote’s decision to give Deep Image one more run before the Magic Millions Cup next month ended up giving him a career highlight on Saturday.

The $3.10 favourite got the run of the race just off the leaders before coming away to beat Miss Fabulass ($7.50) by three-quarters-of-a-length in The Buffering (1400m) at Eagle Farm.

The race is named after Heathcote’s seven times Group One winner Buffering and he said it gave him a special buzz to win the race.

“I went and had a beer with Buffering the other day where he is retired and he is fine. It is a thrill. I might even get a photo of this win for my office wall,” Heathcote said.

“We had thought about putting him straight into the Magic Millions after he won the Lough Neagh Stakes two weeks ago,” Heathcote said.

“But this was a nice purse and he will go into the Millions a very fit horse. He can travel on the pace and that should be a big advantage at the Gold Coast.”

Jockey Robbie Fradd continued his good run with Heathcote and in particular with Deep Image.

“He is a much improved horse. When they went very fast in front he was able to sit behind them and we had them covered on the home turn,” Fradd said.

Glen Boss said his mount Miss Fabulass had tried hard in the straight but the winner kept kicking.

Noel Callow said his mount Tyzone had not been helped by his wide barrier.