Dawn Passage Gets Group Three Win On Board 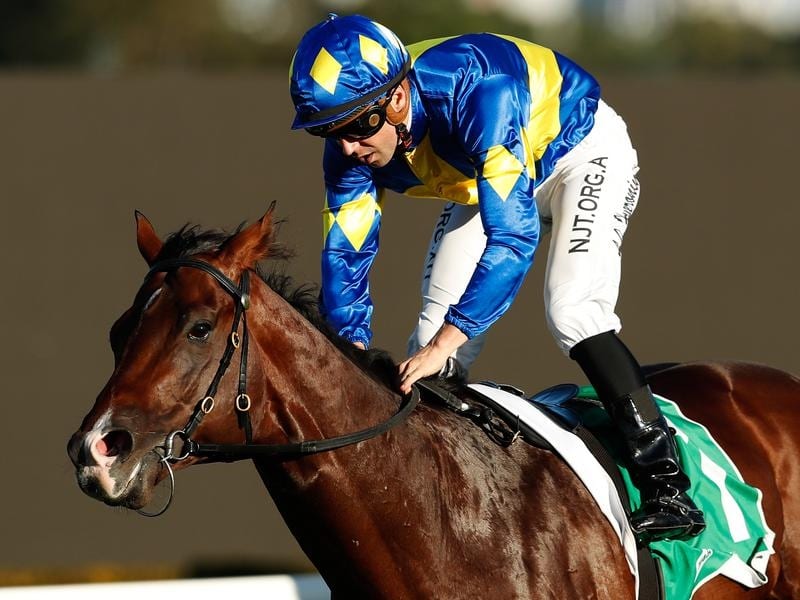 The autumn resurgence of Tulloch Lodge has continued with Dawn Passage a dominant winner of the Group Three Hawkesbury Guineas.

The Gai Waterhouse and Adrian Bott partnership had relatively quiet 2019 but the stable has come back with a bang this year, claiming four Group One wins over recent weeks in Sydney.

Dawn Passage did not compete at the highest level during the carnival but made the most of his chances in Saturday’s Group Three Hawkesbury Guineas (1400m) run on his preferred dry track.

Ridden by Adam Hyeronimus, Dawn Passage was an $8 chance with $5 favourite Bandersnatch scratched at the barrier.

Under strong riding, Dawn Passage drew away from his opposition to beat St Covet’s Spirit ($11) by 2-3/4 lengths.

“He is an unusual horse and I think it was a mixture today of the dry track, his third run and he was in touch with the speed,” Waterhouse said,

“The moons aligned for him, everything came right on the day.

“We will go to the Inglis 3yo Guineas next and then we will look at Brisbane.

“We have had a great carnival and it’s not finished yet.”

Not long after the Guineas, the stable won the VRC St Leger at Flemington with Sacramento.

Like Saturday’s Hawkesbury meeting, the annual Scone program featuring the Inglis Guineas on May 16 will be held at Rosehill.

The coronavirus pandemic has also impacted the Brisbane winter carnival which has been cut back leaving two Group One races, the JJ Atkins and the Stradbroke Handicap which could be a goal for Dawn Passage.

“Dawn Passage could be a Stradbroke horse but I have a feeling he might be looking for further,” Waterhouse said.

“I will talk it over with Adrian and see what he thinks.”

Hyeronimus said things had gone wrong at Dawn Passage’s previous start but fell into place on Saturday once he got into the clear at the top of the straight.

“Trackwork and things have been going well, but too many little things went wrong last start on the soft track,” he said.

“Once I clicked him up before the turn he really picked up the bridle and I felt like the winner from there onwards.”

“She backed up her performance last week with another really good effort and I’m sure a stakes win is in her future,” Coyle said.

“We will take her home and see how she comes through it. We’ve obviously got the Scone meeting but I hadn’t looked past these three runs.

“Obviously with Queensland a little bit harder to do now, at this stage it may take that out of the equation but I’m leaving most doors ajar at the moment.”