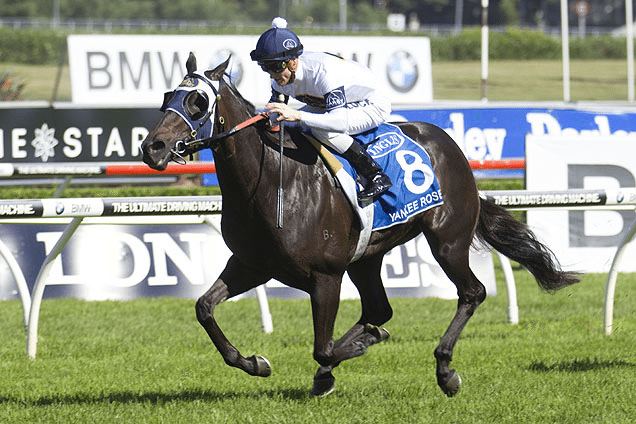 TRAINER David Vandyke has labelled his intentions to run Yankee Rose in the 2016 Cox Plate, but has made it clear he wants a strong rider.

The only problem is Yankee Rose would be given only 47.5kg and finding a rider at that weight is tough, let alone a strong one.

“I’d like to get her to the Cox Plate but I don’t want a jockey who is wasting to ride her,” Vandyke said.

“So perhaps if I give them plenty of time, someone might think about it and start getting ready now.”

Vandyke is looking to give the talented two-year-old the same program which worked for Samantha Miss in 2008. The filly won all four races in the Princess Series before winning the Cox Plate with a light weight.

“Yankee Rose is still in the spelling paddock but will be coming back in soon,” Vandyke said.

“The plan is to go through the Princess Series to the Flight Stakes and then on to the Cox Plate.”

Yankee Rose is on the sixth line of betting at $17 with Sportsbet.com.au. 2015 champion Winx still holds the majority of the money at $2.75.

Japanese champion miler Maurice was upset in spectacular fashion by Logotype in the 2016 Group 1 Yasuda Kinen at Tokyo on Sunday.

Logotype was a champion two-year-old in 2012, but had not won in its last 16 starts since taking out the Satsuki Sho in a then-record time as a three-year-old. The Tsuyoshi Tanaka-trained six-year-old went straight to the front before slamming on the brakes.

That forced race-favourite Maurice to over-race before Logotype kicked around the final turn and held off a fast-finishing Maurice by 1.25 lengths.

“We had to wait a long time to justify Logotype’s form as a group 1 winner and I’m grateful he has stayed healthy to this day to make it happen,” Tanaka said.

“I had discussed our tactics with Hironobu Tanabe [jockey] and we both shared the same opinion of giving our best shot in front if the chance was to arise.

“The race developed to our advantage and watching him cruise away along the rails I was kicking the table with excitement.

“I have not yet decided on our next move as the victory against such a strong field exceeded our expectations.”

The disappointments in the race were second favourite Real Steel, which finished 11th and also Hong Kong entrant Contentment, which faded badly to finish last.

“Brett [Prebble] told me the horse came up empty and had nothing left to give,” trainer John Size said.

“He’s had a long season, this was his tenth run, we’re always in this position, you’ve got to hope you’ve got another one.”

Glen Boss has well and truly settled into his new life in Singapore by taking out the Queen Elizabeth II Cup at Kranji on Sunday aboard the Australian-bred Laughing Gravy.

The Cliff Brown-trained five-year-old scored by 2.5 lengths after Boss set it alight around the home turn. It raced away for the comfortable victory and Boss said it has untapped potential.

“He smashed them at his last run and was up in grade this time, but I think people ignore the obvious,” Boss said.

“Cliff had him going and he had presented him very well for the race. He gave me a lot of confidence when I rode him in a barrier trial on Tuesday.

“He gave me a winning feeling, but Cliff thought it was a bit plain. I told him: ‘Mate, he’s a 2000m horse and he was in a 1000m trial against faster horses, what were you expecting?

“I told him to go clock his last 200m and 400m and he may change his mind. I for one was very happy with that run, and I knew he would be presented at his best for the race.

“To me, all these horses he was up against have already reached their mark. They’re good, but that’s it, they cannot get any better. Whereas for my bloke, we don’t know where he’s at. It’s an unknown and he has so much untapped potential, and that’s the beauty about him.”

The win is Boss’s biggest since arriving in Singapore for his six-month stint. The win will be a great springboard for the international champion rider.

“Winning this race today is important as I’m starting a new life here. It’s my new base now,” Boss added.

Spieth ready for its biggest challenge

Bryce Heys will be lining up his talented sprinter Spieth against the older horses in this Saturday’s Listed $100,000 June Stakes at Royal Randwick.

Spieth is trying to become only the third three-year-old in the last 10 years to win the June Stakes and despite giving away age and experience, Heys is excited to see how the colt handles it.

“It’s all very well looking a million dollars in easier races, but now he has to improve his rating if he is to progress and run in some nice races,” Heys said.

“He has come through his win at Rosehill last start in superb order. We are happy with the colt.

“We just need another good week and I’m happy to run him in the June Stakes if it is not too wet.

“I’ll run him on a slow track, not a heavy track.”

Spieth looked to have above-average potential when winning at Rosehill last start, running its last 600m in just over 33 seconds and it was fully let go. It looks like handling more distance with this Melbourne spring looking a possibility.

“In races up to 1200m he is very effective because of the way he lets go,” Heys said. “But I probably won’t try stretch him to 1400m or further until maybe next autumn.”

Heys is considering running Spieth in the Healy Stakes at Eagle Farm at the end of June, but that will depend on how it goes this Saturday.

“Where we go next with Spieth is dependent on the result at Randwick on Saturday,” Heys said.

“I’m also thinking he may only have a very short turnaround and we could look at a race like the Aurie’s Star Handicap early in the spring because I’m mindful of getting that rating up.”

A start in the 2016 Cox Plate looks unlikely, but Spieth is a $67 chance with Sportsbet to win the Moonee Valley feature on October 22.