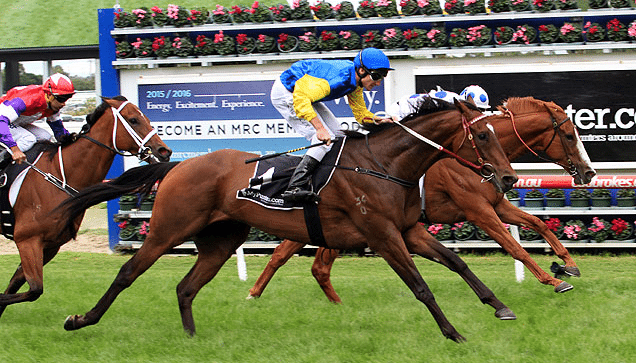 THE Darren Weir dominance is set to continue at Flemington this Saturday and punters are confident that his two Makybe Diva Stakes entrants can do the business.

Black Heart Bart opened as short as $2.10, but has since drifted out to $2.35. Money has come solidly for Palentino according to Sportsbet’s Ben Bulmer.

“Weir is to Melbourne what Chris Waller is to Sydney and he looks to have a stranglehold on the Makybe Diva,” Bulmer said.

“Black Heart Bart was well-backed in the Memsie and punters are spending up again, but Palentino is also popular.”

Weir will be hoping the predicted Melbourne rain won’t dampen the Flemington track too much as he admits Black Heart Bart probably won’t handle a heavy surface.

“The rain would be a bit of a worry. He (Black Heart Bart) handles the slow, but I don’t know about the heavy,” Weir said.

Weir is happy with how it has worked since winning the Memsie Stakes after a work gallop at Warrnambool on Thursday.

“I watched him work at the beach and he’s in great shape,” Weir said.

Weir was also pleased with the effort of Palentino, which will take great improvement out of running fifth in the Memsie.

“He’s getting closer to peak fitness,” he said.

“He looked great and he’s gradually building up.”

The aptly-named Yankee Rose has been the best-backed runner in the Group 1 Golden Rose at Rosehill on Saturday.

The Sires’ Produce winner opened at $11 and is currently at $7.50 following a stack of money being placed on the three-year-old.

“Yankee Rose is a group one winner and finished second in the Golden Slipper. She’s had an interrupted preparation and goes into the race first-up, but punters are willing to overlook that,” Sportsbet’s Ben Bulmer said.

Omei Sword continues to hold favouritism at $3.60 despite the poor record of fillies in the Golden Rose. Waller believes it’s good enough to measure up with the boys.

“She’s not foolproof. She’s still learning her trade and is clearly one preparation behind those better horses – but she’s catching up quickly.”

Waller was initially heading to the Flight Stakes, but with $1 million on offer this Saturday, it was too good to pass up the opportunity and the location of the Golden Rose is ideal.

“The fillies are well looked after,” Waller said.

“You don’t have to run against the colts.

“She didn’t either but I felt she’s got the Group 2 next to her name.

“She’s got a Group 1 at her back door. She just has to walk out of her box and cross the road and she’s at the tie-up stalls.”