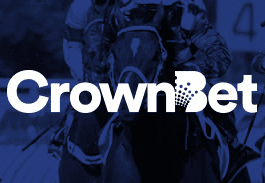 CROWNBET.COM.AU will celebrate the first major meeting of its digital broadcast of Victorian racing with a swag of bonuses for punters.

The Aussie bookie became the second wagering service provider – after Sportsbet – to enter into a non-exclusive digital rights agreement with the governing state body.

While Crownbet began its broadcast of Victorian races on Monday for the Echuca meeting on www.Crownbet.com.au, it will unveil streaming services on its Android and Apple apps in the coming weeks.

To celebrate the launch of the live vision, Crownbet is giving all existing customers whose fixed odds bet places second at Moonee Valley a $100 bonus bet.

The apps won’t be available by Saturday’s meeting, which features the Winter Handicap, but Crownbet will stream all metropolitan and regional meetings via its website in the meantime.

RV’s Racing.com has provided extensive coverage through its ‘Racing Live’ service since March 15, but the convenience of placing a bet and watching the race at the same website cannot be underestimated.

Earlier this week Racing Victoria boss Bernard Saundry said it was an exciting time for the sport in this state, with enthusiasts having greater access than ever before.

“We are pleased to partner with Crownbet in an agreement which supports our objective of achieving a broader distribution of Victorian thoroughbred racing to support growth and engagement,” Mr Saundry said.

Tabcorp Holdings had been the broadcaster of racing in Victoria, but struggled to strike a new deal since the expiry of the last long term agreement on December 31, 2012.

TAB put forward its final proposal on June 1 2015, but they could not strike a deal with Racing Victoria, which has allowed the revolutionary agreements with Sportsbet and Crownbet.

Despite no longer being able to screen the races on Sky Channel, a subscription channel on Foxtel, outside of the 92 Victorian TAB agencies, Tabcorp has vowed it will remain a major player in thoroughbred racing and will still offer comprehensive wagering options.

While the finer details have not been released, channel 7 may screen up to 44 meetings per year on free-to-air television, a huge boost to the industry, which had previously only had showcase days screened for free.

Crownbet has quickly become one of the major players on the Australian bookmaker scene after becoming a reality through Crown Resorts buying a controlling stake in BetEasy.

BetEasy founder Matthew Tripp is still the CEO of the company, despite the rebrand, with his partnership with casino mogul James Packer forming a powerhouse in the betting landscape in Australia.