Criterion ready to take UK by storm at Royal Ascot 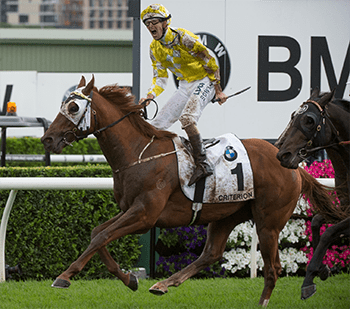 THE David Hayes-trained Criterion is reportedly “sparkling” in preparation for the Prince of Wales Stakes at Royal Ascot next Thursday, June 18.

The four-year-old is an $11 chance to win at CrownBet.com.au, on the same line as 2014 Triple Crown aspirant California Chrome, and it is nearing peak condition ahead of the featured race.

Everything hasn’t gone smoothly though – with a jockey change needed due to the Hong Kong Jockey Club not releasing Joao Moreira.

Hayes will likely award the ride to regular rider Craig Williams, who rode it in its last three starts in Australia.

“He has settled in well,” Hayes said.

“He arrived and felt the trip a bit and initially he had a bit of a spiked temperature and his blood wasn’t quite right.

“Luckily he was having an easy couple of weeks after his busy schedule and it didn’t really effect his training routine as I was going to give him two weeks to settle in.

“Once the blood came right, for the last three weeks he has had a lovely build up and hasn’t missed a beat. He had a look around at Ascot two weeks out from his race to have a look at the course and give him a simulation of a race and he came through that very well.

“More importantly, that brought him on and switched him on again. He will have a cruisey-gallop on the watered gallop tomorrow and then we will just be tapering into the race.”

Australian rider Chad Schofield is already in Europe, riding in smaller carnivals, and he also has a chance of getting the ride aboard the Group 1 winner.

“We thought we would try either Frankie Dettori or Ryan Moore but they both have commitments,” Hayes said.

“Chad Schofield rides him in all his fast work and has not hurt his chances of riding him.

“Sir Owen Glenn [owner] will watch him do his final serious gallop tomorrow and he will then make a decision as to who will ride him.”

Chris Waller is leaning towards running in the Diamond Jubilee with Group 1 winner Brazen Beau during the Royal Ascot carnival on June 21.

“I’m still a few days off making a final decision because I want to see what the weather forecast is like,” Waller said.

“It it is OK then the Diamond Jubilee is the race we’ll more than likely run him in.”

The other option is the King’s Stand Stakes, the highlight sprint of the first day of the carnival next Tuesday.

“The Diamond Jubilee will give him a chance to show his class at 1200 metres whereas the King’s Stand is a straight out sprint race,” Waller said.

Brazen Beau ($3.50 at Sportsbet.com.au) is one of four Australian horses to run at Royal Ascot, including the Gai Waterhouse-trained Wandjina which is also targeting the Diamond Jubilee.

If Brazen Beau runs in the King’s Stand, it would clash with Shamal Wind which is currently on the fourth line of betting at $8 with Sportsbet.com.au.

Brazen Beau is staying at Sheikh Mohammed’s Godolphin Racing stables at Newmarket where the environment is great for horses.

“It’s heaven for horses,” Waller said. “I’ve had some photos sent to me and the horse looks to have come through the trip very well.”

Waller made his way to England yesterday to put the finishing touches on Brazen Beau’s preparation. It will be Waller’s first Royal Ascot runner after plans to run Zoustar were abandoned last year.

*For a full market, head to Sportsbet.com.au