Could the Americans be planning a 2016 Melbourne Cup raid? 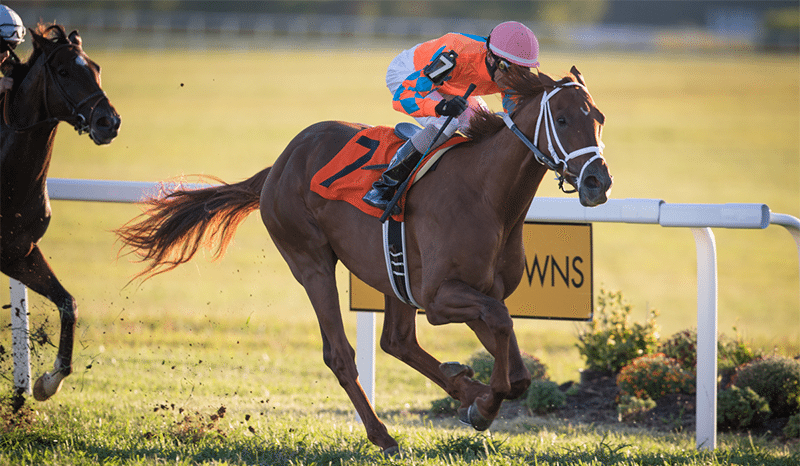 NEWS broke on Sunday night that the 2016 Melbourne Cup could feature an American runner for the first time in its rich history.

American stayer Da Big Hoss won the St Leger on Sunday and its owner Harvey Diamond suggested that it could travel to Australia if circumstances fell into place.

“It’s been in the back of my mind,” Diamond said.

“I’ve heard from another trainer who’s very interested in coming over and has proposed a few different ideas, all of which sound interesting, but not enough to tempt us over there.”

In order for Da Big Hoss to enter Australia it will have to fly to Europe to remain under quarantine. It would then come to Australia and run for a local trainer. Diamond states that money has a lot to do with the decision.

“It would take the right person making the right invitation with the right plans,” Diamond said.

“It’s a long way if we took him over there. We’d probably leave him for year and hopefully find a syndication or a stud over there.”

Diamond has been in contact with Australian Racing talent agent Leigh Jordan, who believes the American stayer will be suited to Australian racing.

“We’ve had talks over the last few weeks,” Jordan said.

“He’s a very nice stayer and would be suited to Australian racing, but we’ve got to work through the issues. However, they know a lot about the Cup so it could be an exciting time.”

Meanwhile, Clondaw Warrior finished only half-a-length behind Da Big Hoss and the Willie Mullins-trained Galway Hurdle winner could be lining up in the Melbourne Cup as well.

“I’m hoping that. He looked fantastic today even with all his travels this year,” Mullins said.

“When he’s closing in on the Belmont Gold Cup winner (Da Big Hoss) that has to mean he’s good enough to go to Melbourne.

“He might have one more run. We’ll see. He’ll have to improve a little in the weights to get into the race, but we’d love to go if we can.”

Punters can bet on the Melbourne Cup with CrownBet.com.au, where fellow international star Order Of St George is the current favourite.

There has been plenty of discussion surrounding Winx’s bone chip surgery this week, but one thing is for sure, Chris Waller is confident the 2015 Cox Plate champion is “ready to explode” this Saturday.

Winx will be contesting the $250,000 Group 2 Warwick Stakes at Randwick, which was won by former stablemate Royal Descent in 2015.

Winx is fresh up following a last start win in the Group 1 Doncaster Handicap, but it has since had bone chip removal surgery and that had some punters worried.

“She is ready to explode,” Waller said.

“I just want to get her back racing and then I will enjoy it.

“The normal procedure for us is to tell the stewards before we accept in a race. I fully understand that people have put money on in the Cox Plate.

“But if I didn’t think she could win the Cox Plate we would not be nominating and going for it.”

Winx has now won nine consecutive races and although Waller doesn’t feel the pressure himself, he also doesn’t want to let the Australian racing public down.

“There is good and bad pressures,” Waller said.

“I don’t have to find a champion.

“I’ve won a Cox Plate and have a horse good enough to win it this year, so no pressure there. The pressure is not to disappoint the public.

“She is (like an) Australian Olympic representative and I am the coach.”

Waller admits it was a tough decision to send Winx to surgery, but it was only minor and it has come through it without any problems.

“I didn’t know whether to do it or not,” he said. “There is always a risk when they come out of anesthetic. Getting up is the main concern but they did a good job.

“On my son’s life, she has never had a day’s lameness, so I was extremely shocked.

“It was very minor but they said it was a long-standing issue. There was no heat in the joint but there was a small bone chip.

“She had 42 X-rays and 41 were clear. They scanned all her tendons and everything was fine, but they found this bone chip that was long-standing.”

Winx will join stablemates Preferment, Grand Marshal and Who Shot Thebarman in the Warwick Stakes which are all preparing for the bigger spring carnival features.

Group one winner First Seal will have a barrier trial at Randwick on Friday in preparation for the $400,000 Group 2 Golden Pendant on September 24.

The John Thompson-trained five-year-old has been a touch unsteady since winning the 2014 Flight Stakes, having not won at the top level since, but Thompson will take a race-by-race approach this season.

“At this stage we’re starting off in the mares’ races,” Thompson said.

“We’re coming into the spring so there’s plenty of options there depending on what she’s doing at the time.”

First Seal managed to bounce back from a hoof injury last spring to win the Group 2 Millie Fox Stakes before running 12th in the Doncaster behind Winx.

Thompson also has spring hopeful Zanbagh which will trial this week after getting scratched due to the heavy track at Randwick on Tuesday.

“We just didn’t want to go on the wet track but we’re a long way out from her first run so we’ve got plenty of time,” Thompson said.

Thompson said that Zanbagh will likely line up in the Group 1 Myer Classic at Flemington on Derby Day.