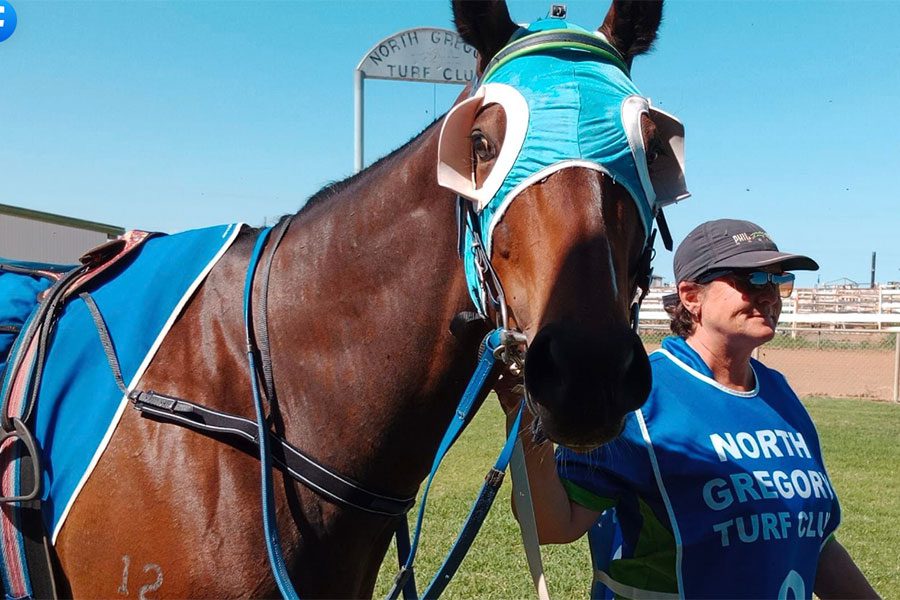 The winning ways of Darwin trainer Phil Cole in Queensland have continued after he landed a winning double at the North Gregory Turf Club’s meeting at Winton on Saturday.

It was also a significant occasion for the Northern Territory stable with six-year-old mare Faith And Love saluting in her final race before enjoying retirement at Willow Park Stud, near Scone, in the NSW Hunter Valley.

The daughter of Holy Roman Emperor had 41 career starts for six wins, seven seconds and 11 thirds, yet she never recorded a single victory in 17 starts in the NT.

She was placed on seven occasions at Darwin’s Fannie Bay, and had just the one start at Alice Springs and Katherine with her best result being a fourth in the Red Centre on Alice Springs Cup Day on May 1.

Before that appearance at Pioneer Park on the first Sunday in May, Faith And Love had posted a win over 800m at the famed Birdsville track in outback Queensland near the South Australian border – just east of the Simpson Desert and NT border – on April 11.

Faith And Love, who had nine starts for three seconds in Victoria for trainer Matt Cumani, made one appearance at Hawkesbury in NSW and one appearance at the Sunshine Coast in Queensland before winding up in the yard of Toby and Trent Edmonds on the Gold Coast.

After six starts at the Gold Coast and Ipswich for a win, two seconds and three thirds, Faith And Love departed Queensland before making her debut in the Top End in December 2020 and finishing second over 1000m (0-64).

Despite the constant battle in her quest to achieve a win in the NT, Faith And Love just loved the dirt tracks in the western and central regions of Queensland.

She managed back to back wins over 1000m in Cloncurry in September and October last year before that win at Birdsville in April, which was basically the 2021 Birdsville Races that were re-scheduled after being called off in early September last year because of COVID.

In Saturday’s race over 1000m (BM65), Faith And Love jumped from gate eight in the 10-horse field and showed impressive speed before holding a handy two-length advantage once the field had settled into stride.

With Wayne Davis, who is Cole’s leading rider in Darwin, in the saddle, the mare maintained her advantage and once turning for home she negotiated the final 230m in spirited fashion to prevail by three quarters of a length.

For Davis, who was riding at Winton for the first time, it was his second win aboard Faith And Love in Queensland after the pair combined to get the cash in Cloncurry last October.

“She’s been a pretty honest mare since we started bringing her to Queensland and she’s off to stud this week,” Cole said after the win on Saturday.

“She’s got tremendous speed and sort of thrives out here on these short turning tracks.

“Just in Darwin, she’s not suited there – and hopefully she goes and breeds plenty of winners.

“She’s a really tough mare, every time she’s travelled to Queensland a couple of times with us in the past – three times now – she really thrives on travelling and you could just see today, four runs in four weeks and she still raced really well.”

The other winner for Cole and Davis on the six-event program was six-year-old gelding Maxaway, who started favourite before overcoming his rivals by two lengths over 1400m (BM45).

Lumping 63kg, Maxaway jumped from the outside barrier in the 10-horse field and held a commanding three-length lead after 300m – he was still in good shape with 300m left to go approaching the home turn.

Tanya Parry’s Injustice (Dan Ballard) from Julia Creek and David Rewald’s Strawberry Blonde (Robert Faehr) from Blackall did their best to bridge the gap before finishing second and third, respectively.

Of the other two horses Cole prepared and Davis partnered, It’s Pins couldn’t get going early before finishing sixth in an 800m maiden and Andaman held down third place for the first half of the race before fading to finish sixth in a Class B Handicap (1200m).

Cole had nine runners on deck for the six-race meeting at Betoota in late August, and although most of his runners were competitive, he failed to secure a win.

In the 13 races held over the two days at Birdsville, Cole tasted success on five occasions with Saccharo winning the AU$42,000 Birdsville Cup (1600m) and Kronos winning the $25,000 feature sprint over 1200m.

It was then off to Bedourie, which hosted six races, with Cole winning three races including the $15,000 Bedourie Cup (1600m) with Saccharo.

Davis will ride both horses as the Darwin contingent draws the curtain on its Queensland sojourn before making the long trip back home to the Top End.

“The plan is to take Saccharo to Longreach for the Cup and let’s hope the rain stays away in the coming week – he’s pulled up really well from his runs,” Cole said.

“We would have been happy to run him at Winton, but there wasn’t a race for him.”

Crazy Lad, Maxaway, Do Your Best, Stroke Of Magic and Andaman are the likely other runners for Cole at Longreach.

The affable Davis, who is never short of a word, was in fine form after guiding Faith And Love to victory.

“Fantastic, full credit to Team Cole – they turned their horse out in magnificent condition,” he said.

“Full credit to the curators of the Winton track – it’s in magnificent order.

“It’s just a privilege to be here to be part of the crowd, part of the team and riding a winner.

“She’s a mare with a lot of qualities.

“Gave a good kick, strong through to the line – a fantastic effort, very proud of the mare.

“Have saddle will travel.

“It’s exciting to be in places where you haven’t been before – it keeps you on your toes, you’re out of your comfort zone and it keeps you a little bit sharper.

“You’re riding against different riders on different tracks – it’s all about being on your game and being a part of a great team.”