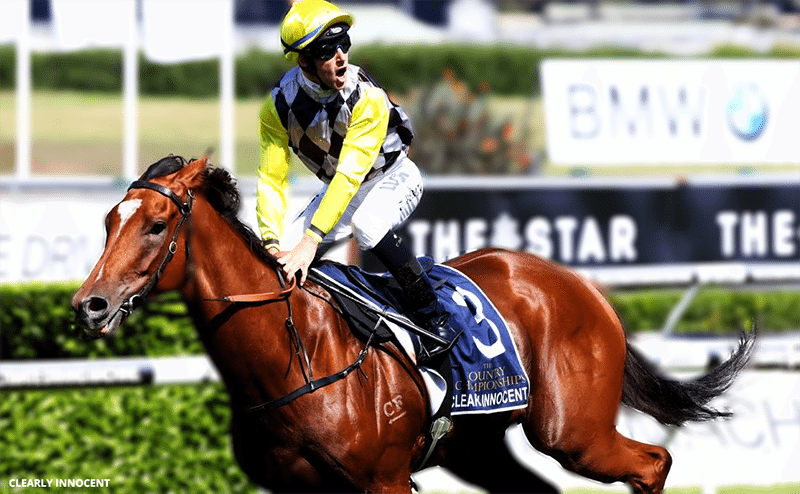 CLEARLY Innocent is the stable star for Greg Bennett, who believes the Country Championship winner has Group 1 potential.

Bennett has long been a pre-trainer to some of Australia’s best thoroughbreds, including All Silent and Typhoon Tracey, but he now has one for himself which could echo the efforts of those champion types.

Clearly Innocent has won seven from nine starts and Bennett will now target it towards the Group 1 races this spring.

“He is still up in Queensland where he has been spelling in the warmer weather,” Bennett said. “We are in the process of working out a program for him over the next couple of weeks.

“The Epsom Handicap is a goal as is the Emirates Stakes. We have to work out whether we stay in Sydney or go to Melbourne or both.”

Both the Emirates and Epsom are run over 1600m, a distance which Clearly Innocent has yet to attempt, but Bennett isn’t worried about the son of Not A Single Doubt getting the trip.

“He is a versatile horse and I think that will help him get a strong mile.”

Melbourne Cup winner back to its best

2014 Melbourne Cup winner Protectionist is thriving in Europe after taking out the Group 2 Grosser Hansa-Preis in Germany on Sunday.

It went through some tough times post-Melbourne Cup when it was transferred to the Kris Lees stables, with the hard Australian tracks giving it feet issues.

Back with Andreas Wohler in Europe, Protectionist has found its best form again and could come down under for another tilt at the Cup.

“We have plenty of time and aren’t making any decisions at the moment,” Wohler said. “The horse comes first and we shall do whatever we feel is in his best interests.

“I was really impressed with the way he won today, but we know he’s had his problems so we’re going to take it race by race, and his Australian owners are in full agreement.

“He’s clearly going the right way, the ground today wasn’t ideal, but he still had too much class for the others.”

Protectionist is currently a $15 chance to win the 2016 Melbourne Cup with local German bookmakers, but Australian punters are getting a great price of $34 at Sportsbet.com.au.

Future uncertain for Vandyke and Maurus

Maurus was talked about as a possible Caulfield Cup contender after its dominant win in the Ipswich Cup, but a lacklustre outing in the Caloundra Cup on Saturday has posed some questions.

The David Vandyke-trained runner was the $1.50 favourite with CrownBet, but failed to see out the 2400m when finishing fifth behind surprise winner Amexed.

Vandyke is now doubting its ability to see out a strong staying distance and is unsure about their future together.

He said he was uncertain whether he would be training Maurus in the spring and would respect any decision made by Paul Fudge of Waratah Thoroughbreds.

“I’m the one who decided to move and I’m grateful to Paul and Waratah for their support,” Vandyke said.

Jockey Damian Browne said Maurus struggled to see out the distance after stewards questioned his riding tactics on Saturday.

He said he was happy to sit at the tail of the field and had attempted to push Index Linked wider at the 1800m.

“But he held me in and I was content to trail Jumbo Prince,” Browne said.

Ball Of Muscle to resume in Moir Stakes

Joe Pride has set tough sprinter Ball Of Muscle for the 2016 Moir Stakes as its starting point for the upcoming spring carnival.

Having finished second behind Buffering in that event last year, Pride believes the Moonee Valley feature is a good place to begin preparations for a potential run at the Winterbottom Stakes in Perth.

“Ball Of Muscle comes back to the stable on Monday and he will go first-up into the Moir Stakes,” Pride said.

“We will also look at Perth and the Winterbottom with him.”

Pride has another top sprinter in the stable with Terravista, but the 2014 Darley Classic winner will likely have only one run this spring.

“Terravista is another month from coming back and he may only have one run in the spring just to keep him up to the mark,” Pride said.

“We are looking at the autumn with him but I want to have a preparation in the stable.

“The main thing is to get his feet right. He has a history for quarter cracks which needs to be managed and if we can, I think he has another couple of seasons racing at the top level.”