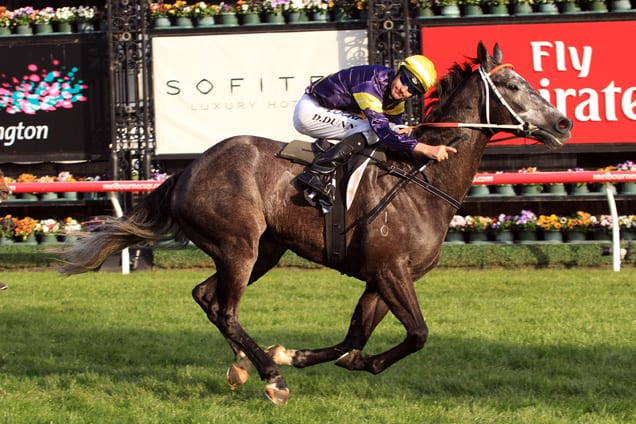 THE Team Hawkes-trained Chautauqua is the current $3.00 favourite with William Hill to take out this Saturday’s Group 1 Newmarket Handicap at Flemington.

The four-year-old gelding comes into the 1200-metre sprint on the back of his narrow, yet commanding victory in last month’s Group 2 Rubiton Stakes at Caulfield and faces an enormous task up against the world’s equal highest rated sprinters in Terravista and Lankan Rupee as well as boom three-year-old Brazen Beau.

Lankan Rupee, which is $3.20 with William Hill, was back to his brilliant best last start, registering an ultra-impressive triumph in the Group 1 Lightning Stakes over Brazen Beau and the previously unbeaten Deep Field. The Redoute’s Choice gelding, a winner of 11 races including five Group 1s, has drawn barrier nine of nine for the six furlong dash for trainer Mick Price and leading hoop Craig Newitt.

Stunning chestnut Terravista is the next best in the market, currently $5.00 with online bookmaker William Hill. Joe Pride’s galloper comes into the Newmarket having not had a start since November, but he went out on a winning note that prep – claiming the Group 1 Darley Classic down the straight at Flemington. Also sitting on the $5.00 quote is Brazen Beau.

William Hill’s Andrew Brown says that most punters at this stage want to be on Chautauqua.

“We took twice the money for Chautauqua compared to Lankan Rupee in our all-in book,” he said.

“Obviously Chautauqua beat him in the spring and gets a 3kg turnaround but Lankan was awesome first-up and might just prefer racing in the autumn.”

No other runner in the Newmarket Handicap is under double figures at present, with the prices then drifting out to Delectation at a big $17. The three-year-old finished at the tail of the field in last month’s Group 2 Hobartville Stakes behind freakish youngster Hallowed Crown and looks to be in the deep end against such a quality field of sprinters.

The Group 1 Newmarket Handicap is race six on the Flemington card this Saturday and will jump at 3:50pm AEDT.

Sign-up with WilliamHill.com.au for up to $700 in bonus bets!