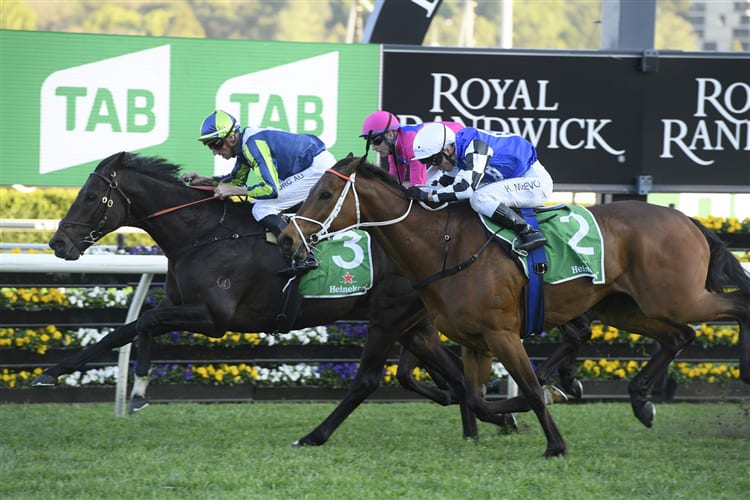 Trent Busuttin says it is not ideal having to wait another week for Mirage Dancer and Impecunious to line up in their respective Group 1 races at Rosehill on Saturday.

Mirage Dancer is down to run in the Tancred Stakes (2400m) with Impecunious scheduled to compete in the Vinery Stud Stakes.

Saturday’s meeting has been delayed a week, with the remainder of the Sydney Autumn Carnival also pushed back a week, due to the weather delay of the Golden Slipper meeting.

Busuttin, who trains in partnership with Natalie Young, said he would have preferred the two races to be run where they were programmed.

“Instead, they’ve been waiting around and something could go wrong,” Busuttin said.

Luckily for Busuttin and Young nothing has gone wrong.

“They’ve been ticking over,” Busuttin said.

“They’ll both be three weeks going into their races, instead of two weeks, so it’s no drama really.

Damien Oliver will be re-united with Impecunious on Saturday having won on the filly at her Australian debut at Caulfield in December.

Glen Boss rode Impecunious in two subsequent outings when a luckless fourth in the Angus Armanasco Stakes at Caulfield and when third in Phar Lap Stakes at Rosehill on March 13.

“He knows her. He’s happy to be back on board, and we’re happy to have him on her,” Busuttin said.

One horse the delay could help is Rich Hips who may start in the Group 2 Emancipation Stakes (1500m) on Saturday.

Rich Hips was heading straight to the Group 1 Coolmore Legacy (1600m) at Randwick, originally scheduled for April 10, after running ninth in the Coolmore Classic (1500m) at Rosehill on March 13.

But with the Coolmore Legacy pushed back a week, Busuttin said there was time to have another start.