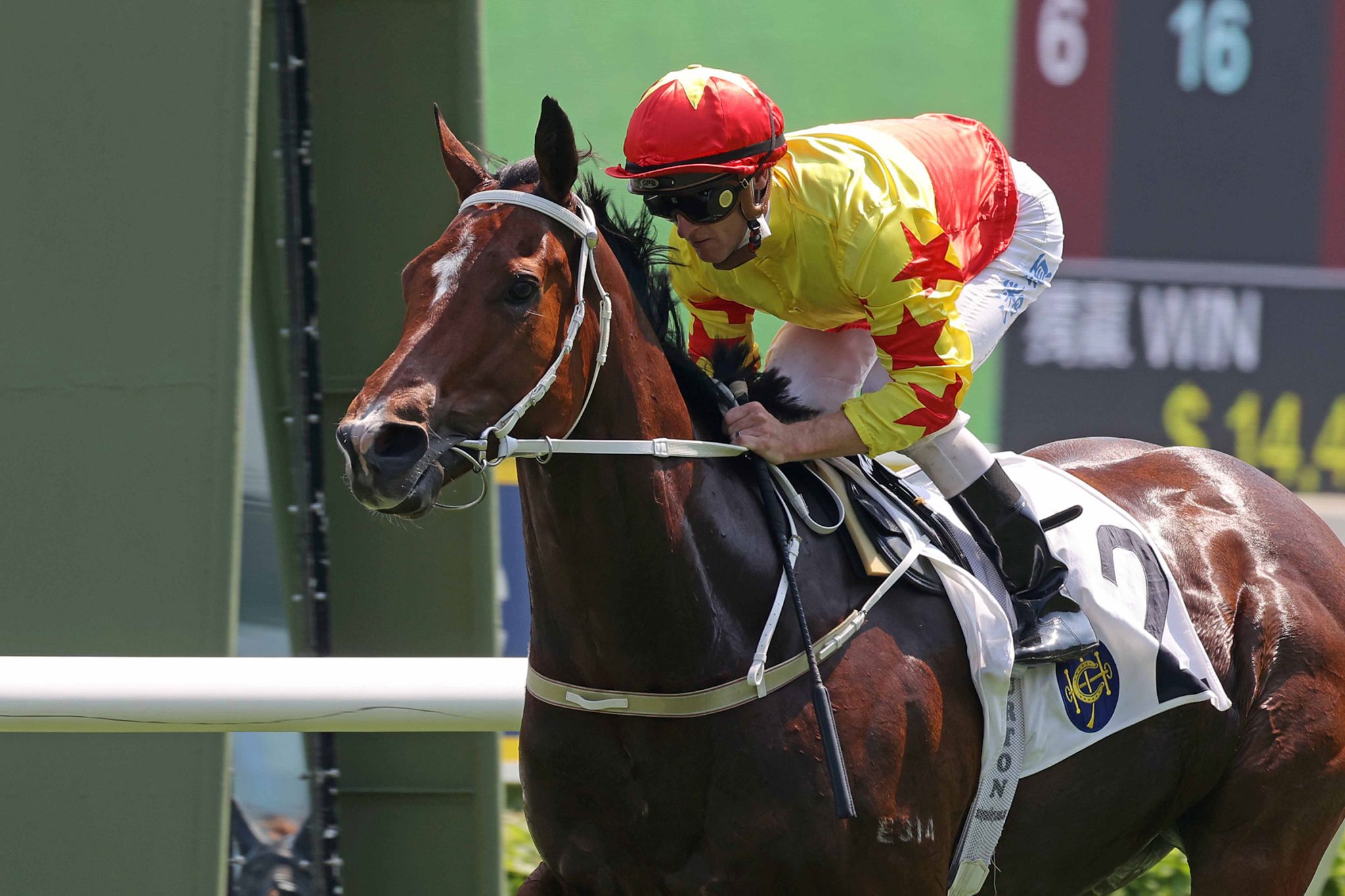 “I think he’s a miler. He’s a real front-runner,” Cruz said after California Spangle improved his overall record to seven wins and four seconds from 11 starts, while also adding a HKD$500,000 Top-Up bonus to the HKD$2.223 million prizemoney he collected for victory on Sunday.

“At the 1200m, it’s hard to get to the front if you’ve drawn wide, but in the 1600m there are no fast horses around. I think he will be the fastest one and easily lead the race and have it his own way again.”

A 10-time winner over Sha Tin’s 1600m course, Golden Sixty has won the past two editions of the LONGINES Group 1 Hong Kong Mile (1600m) and downed California Spangle by two lengths when the pair clashed in the Group 1 FWD Champions Mile (1600m) at Sha Tin on April 24.

Clocking a sizzling 1m 20.49s after bouncing straight to the lead on Sunday, California Spangle demonstrated customary high-cruising speed under Zac Purton with mid-race sectionals of 21.72s and 22.61s before cruising over the final 400m in 22.78s to defeat Healthy Happy by two lengths. Duke Wai was a further three lengths back in third.

“He’s just won the easiest race he’s ever had,” Cruz said. “Zac took it so easy. It made the race look like he hardly had to push the horse.

“He went to the front and he got the rail and at the home turn he could relax. Coming into the straight he only had one horse to challenge him, Healthy Happy, and I think it was the easiest race he’s ever had.

“Zac said the horse can relax even better now than last season so there’s been improvement in him. He can relax in a race much better than before and he thinks we need to go a mile race next time. He used to be a bit cheeky and fresh but he seems to have calmed down a lot, he doesn’t seem to play around anymore and I think he is an improved horse.”

Purton, who has a table-topping 11 wins for the season after a treble on Sunday, said California Spangle had performed to expectations after weathering early pressure from Matthew Chadwick on Duke Wai.

“It was what I was hoping for. Chadwick kept digging up on my inside early and made it bit more of a genuinely run race than what I thought it was going to be.

“He settled a lot better today – especially on that speed – and handled it better, which was really, really good. It bodes well for the future, if he keeps racing that kindly he’s going to help himself.”

John Size notched his first winner of the season when the 11-time champion trainer’s Sweet Encounter, an unraced Toronado gelding, led all the way to land the first section of the Class 4 Kwong Fuk Handicap (1200m) to provide Alexis Badel with his maiden success of the term.

Tuchel then completed a double for both Size and Purton with a convincing display in the Class 3 Fuk Loi Handicap.

“The race was set up nicely for him, he was able to take advantage of a decent pace and finish the race off as you would probably expect,” Size said of Tuchel before describing Sweet Encounter as “beautiful horse, a lovely mover, he does everything like a quality animal and today he was afforded a very good start, put himself in a good position and he was better than those horses.”

David Hayes hailed Matthew Chadwick’s performance aboard Star Contact to snare the Class 4 Oi Man Handicap (1400m), describing Chadwick’s ride as “one of the best you will see from a wide barrier” as Ricky Yiu continued his excellent start to the season with the surprise success of Joyful Win in the Class 3 Fu Tai Handicap (1000m) under Lyle Hewitson.

Hayes was delighted with Fantastic Treasure’s effort to overhaul talented Ima Single Man in the Class 2 Cheung Hong Handicap (1200m) under Purton to snare his first win since May, 2021.

“It’s great to have Fantastic Treasure back and Zac’s ride was fantastic,” Hayes said after sealing a brace. “I think I’ll keep this horse to sprints now. He’s done a great job to come back from the issues he’s had.”

Good Buddy provided David Hall with his fourth triumph of the season under a clever Luke Ferraris ride in the second section of the Class 4 Kwong Fuk Handicap (1200m) as Vincent Ho drove Looking Great to victory for Frankie Lor in the Class 3 Hing Man Handicap (1600m).