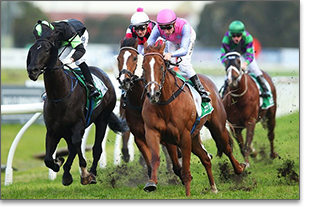 THIS WEEK the bookmakers are offering their services for the $100,000 Winter Challenge at Rosehill (Race 6) which has attracted a very even field of 10 runners.

They also give their day’s best bet, value runner and lay of the day.

There are plenty of good bets across Australia on Saturday and our bookies have included day’s bests from Adelaide, Brisbane and Sydney.

“Looks a very even race on paper and thus far the betting reflects this. Eigelstein, although he is no star, looks like getting a decent run if they elect to go forward and that may be enough to get him home here.”

“Only recently started stepping out beyond the sprinting trips and seems to have found a liking to them. Finished alongside Rugged Cross here last start and no reason why he can’t turn the tables.”

“Been racing consistently this preparation without winning. On the 7 day back up and looks set to get the gun run from the draw. Gets his chance to breakthrough here.”

“Struggles to string wins together but finds a field that gives him every chance to do so. Pace will come from the bottom two so expect this bloke to pounce in the last 200m.”

“Has to be impressed with the debut win run in fast time. Challenger will come from The Big Dance, who was also quick on debut, but expect Damien Oliver to jump and run and get punters off to a flyer.”

“Progressive mare that looked good recently at the trials. Can put in a good run fresh and although will improve from the run could be a sneaky chance at odds given she’s a Group III winner last prep.”

“Been very impressive against his own age this preparation. Has the ability to rattle off some fast sectionals and against mostly exposed older Horses should prove too good on the limit weight.”

Value runner – Shadow Of The Mist at Moonee Valley, Race 4

“Should be ready to peak here after a narrow second over this course and distance last start. Should get a reasonable run up on the speed and at the price looks great each way value.”

“Showing great staying ability since stepping up in journey winning his past two starts impressively. Goes up in grade for this but does look to have a bit of quality about him. Watch for him late.”

“Lee Curtis-trained gelding returning to his home track where he was runner-up at his first two runs from a spell. Got a long way back in the Ramornie and ran on well. Look for him charging late.”

“Won his debut before contesting Group races in Melbourne where he wasn’t disgraced. He attacked the line powerfully last start when returning from a break and should be too good for his rivals this week.”

Value runner – Walk To The Bar at Doomben, Race 4

“On the back-up. Drawn better than was the case last week where he ran to the line strongly for fourth. In this smaller field, won’t be conceding such a start and at $9 looks an attractive each-way play.”

“Unbeaten this prep, but doesn’t enjoy the same advantages in terms of weight and fitness this time. There look to be at least very solid chances around him so on that basis we will oppose him.”

“Finally got another win last start. Has won here at Moonee Valley at his only start but unsure if the track really suits. Drawn the inside and might be looking for runs at crucial stages.”

“Looked to trial well and is a smart type but has never won first up before. Will be charging late but prepared to risk him at his current quote in this.”

“Won his first race in two years at the start of this prep and then has been backed to his usual thereabouts self. Change of jockey definitely brings her into calculations.”