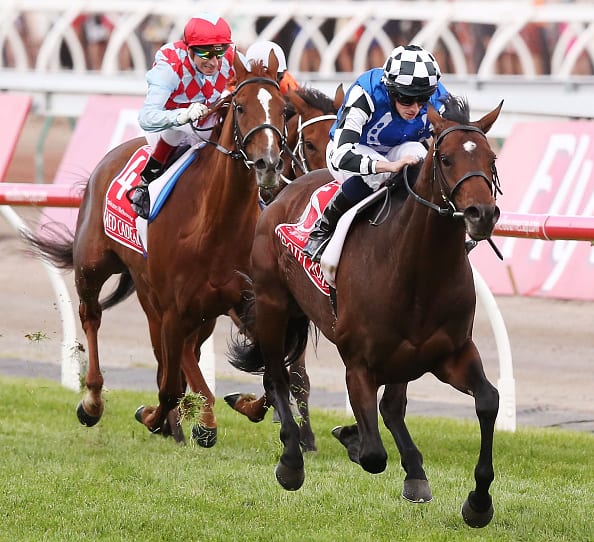 THE bookmakers have given us their thoughts on the Winter Championship Final at Flemington this Saturday and also there best bet, value runner and lay of the day.

It’s a two-horse war between Mr Utopia and Sir Andrew for the Winter Championship and there are plenty of good bets across Australia supplied by the bookies.

“Been in cracking form this preparation and now steps up in trip to a distance he is unbeaten at. Handles all types of conditions and looks the testing material here.

“Raced well against similar company at his first two runs this prep before disappointing when travelled to Sydney last start. Prepared to forgive that run and looking for him to be ready to peak back here.”

“Ready to run a big race here and drawn to be closer. Gets a stack of weight off his main rivals and the 1600 looks perfect for him. Will be very hard to beat.”

“Clearly been aimed at this race since coming from NZ and has been screaming out for the mile. Craig Williams should position him behind the pace and once clear storm over the top of his opposition.”

“Going with the fav here. Has looked all prep like the 1600 metres at Flemington will be his go and with good speed up front should get a lovely cart into the race.”

“Been flying of late and comes here after a very impressive win last start. Ran better figures than the older horses that day and despite this being harder looks very hard to beat with the light weight.”

“Strikes a race where there doesn’t look to be a lot of speed engaged which should enable her to get a soft run and take running down. Looks good value at her current quote.”

“Steps up in class but is in great form winning at her past three starts. Gets in on the minimum and from the good draw won’t have to do much. Look for her to be charging over the top.”

“Won her first two runs this prep before placing in similar last start. Form from her win two starts ago looks very strong for this. Drawn a little awkward but will carry no weight after the claim for Jess Taylor.”

“We’ve been waiting awhile now for this import to show his best and he bolted in at Ballarat last start and we think he can race through the grades. Finds a moderate race here on the limit and will be too good.”

“Finds an average race here and gets in well at the weights. Was brave last start in Sydney and should go forward in a slow pace. Great price for such an honest galloper.”

“A perennial bridesmaid this prep, has been running really well without much luck. Darren Weir knows how to set a horse for a race and this is his grand final.”

“Very consistent mare that was backed off the map last start when saluting at Sale. Flemington should suit her racing style and happy to take the price on offer here.”

“Became somewhat costly for punters last prep, but is a reliable proposition first up, has trialled well and any give in the ground will assist. Has been well backed.”

“After a promising run second-up she was ordinary last time out. Think it’s significant that Robert Smerdon has applied the blinkers here. Worth another chance.”

“Has been well found at each of his three Australian runs without success. Made late ground last start without savaging the line and looks to be under the odds at his current quote.”

“Is probably now fully wound up but continues to need things to go in his favour with his style of racing. Will go back again and come with the last shot but will it be in time? I’m prepared to risk him again.”

“Has been very underwhelming this prep in relatively easy races. Just isn’t the same horse he was in the spring, where other factors may have played a part.”

“Has a stack of weight in this and to my eye isn’t racing at her best compared to her previous Perth form. At under 3/1 we’ll be taking her on.”

“Has to carry a significant impost and her best form is at Rosehill. Likely to be challenged for the lead in this and based on those factors I’ll be looking elsewhere.”