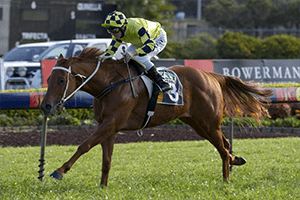 THE Melbourne Spring Racing Carnival is in full swing with a quartet of group one races set to sizzle the track this weekend.

Caulfield plays host to the Caulfield Guineas, Thousand Guineas, Toorak Handicap and Caulfield Stakes in a day of racing that rivals the best.

We’ve got the latest news, odds and movements on each of the weekend’s big races.

Red hot Caulfield Guineas favourite Press Statement copped a kick in the teeth when it drew out in the car park.

Barrier 14 is about as bad a result as it gets for the gun Colt, the barrier draw forcing our mates at sportsbet.com.au to ease the three year old out from even money to $2.25.

“Press Statement is the class runner of the field, but drawing two from the outside is definitely a concern for punters,” the bookie’s Ben Bulmer said.

“It is also the colt’s first start, racing the Melbourne way (anti-clockwise) of going, so he has some hurdles to overcome.”

Those hurdles are very real, according to racing icon Pat Hyland, who told the Sydney Morning Herald he thinks Chris Waller’s superstar could struggle.

“He is a Sydney horse and a lot of Sydney horses don’t go around Caulfield,” said Hyland.

“I remember Kingston Town came down here and he didn’t race well around here at all (in its first start).”

The drift on Press Statement means Ready For Victory has now firmed from $11 into $9 along with Kiwi three year old Dal Cielo.

That trio are the only horses in single figures for the race, with perhaps Shards ($21) a sneaky chance at long odds.

“Press Statement is coming off an impressive win in the Stan Fox and will be looking to add another Group 1 to the CV this Saturday,” CrownBet’s Rob Cumbrae-Stewart said.

It’s tight at the top in the Thousand Guineas.

Peter Moody’s star Pasadena Girl has been the favourite in the lead up, but Sportsbet has wound Stay With Me in from $4.50 to equal favouritism at $4.

She sits at the head of the pack with CrownBet, with the David Hayes-trained hopeful on the second line of betting at $5.

“Pasadena Girl looks trained to the minute to win on Saturday, she has had two very two impressive runs since returning from a spell,” Cumbrae-Stewart said.

“She is proven at this level and distance, she will be storming home late.”

Pasadena Girl will be again ridden by jockey Hugh Bowman, the same hoop who guided her to victory in the 1600m group one Champagne Stakes at Randwick in the autumn.

Moody reckons his horse is primed for the race.

“Pasadena Girl’s coat is ­finally starting to shift and I think she will run extremely well,” Moody said. “There will be significant improvement in her going ­towards the Oaks, but having said that, I thought there was more likely improvement from her recent two runs than there was in other fillies heading into the Thousand Guineas.

A pair of Darren Weir trained machines are the key challengers to Toorak Handicap favourite Disposition.

Disposition is a $4.40 favourite with Sportsbet.com.au, but Weir will fancy his chances with Lucky Hussler and Stratum Star.

“The Weir trained Stratum Star and Lucky Hussler are equal $6 second favourites for the Caulfield group one,” Bulmer said.

“It’s an open betting race, with Noble Protector next in the betting at $7.

“Darren Weir is having another stellar season and Stratum Star could make it two group one’s in a row here.

“He was impressive winning the Rupert Clarke last start and stablemate Lucky Hussler wasn’t far away, just behind the placegetters.”

CrownBet.com.au has disposition slightly looser at $4.50, but Cumbrae-Stewart reckons that’s value for money for the consistent stayer.

“The Freedman brothers have Disposition flying since crossing over to their stables,” he said.

“He gets in well at the weights and will be looking to make amends on his narrow defeat last start.”

Waller is at it again in the Caulfield Stakes with the monster three year old the $3 favourite with both Sportsbet and CrownBet.

Waller’s beast will have 2013 Caulfield Cup winner Fawkner (the $4 second favourite) breathing down its neck, as well as gun stayers like Happy Trails ($12).

And he does have the question mark of a first start over the distance to deal with.

But Cumbrae-Stewart says CrownBet punters aren’t too concerned by the distance.

“Whilst it is Kermadec’s first start over 2000m, we feel he should handle the distance and will be looking to cement his spot as the top horse in Cox Plate betting,” he said.

Sportsbet.com.au has Contributor equal with Pornichet in the betting at $5.

One guy who knows a thing or two about Kermadec’s claims is star hoop Glenn Boss.

He reckons he is in the top three horses in Australia, despite the fact he has never won a race past 1600m.

“All the signs are there that he will run 2000m on Saturday,” Boss said.

“And then that vital extra 40m in the Cox Plate – But he still has to do it.

“There is nowhere to hide at this level over this trip — these are quality group one gallopers, so Saturday will tell us an awful lot.

“He is relaxed, a no fuss galloper, just a push button horse.

“He has tightened up since his last win in Sydney and his coat is coming through.”

Fawkner won’t have its usual rider aboard, with champion Damien Oliver suspended for the $400,000 race. Oliver copped a 10 meet suspension for causing interference in the UCI Stakes last month.