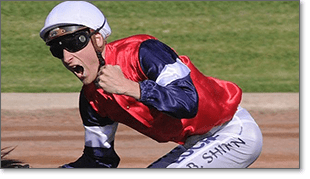 THE New South Wales jockeys’ premiership looks all sown up, but Blake Shinn has a chance to peg current leader Hugh Bowman back.

Shinn has only five rides at Canterbury on Wednesday, but his book looks enticing and he could very well pick up a few early wins.

“I know it’s highly unlikely that it’s going to happen but I always go in with a winning attitude,” Shinn said. “I rode five [winners] one day in Brisbane recently. Stranger things have happened.”

“I approach every day and every race with a winning frame of mind and will be doing that on Wednesday.

“Whatever happens I’ve achieved more than I could imagine this season. And to be in this position vying for a premiership I have to pinch myself. Hopefully this will cement me within the top riders in Australia.

“With the backing of Gai Waterhouse, the Snowdens, Chris Waller and so many other great trainers I am hoping to be one of the leading riders in Australia in years to come.”

Shinn kicks off the day with the Chris Waller-trained Metallic Crown in Race 2. It’s a first starter with good trial form and is currently a $6.50 chance with Bet365.com.au.

“He’s a very talented horse,” Shinn said. “He showed that at his first trial. He’s trialled twice on wet tracks and hasn’t appeared that comfortable. Let’s hope the track dries up but as an athlete he’s a quality individual.”

Shinn rides another quality horse in Race 3 aboard I’ll Take The Jag. The John Sargent-trained three-year-old is coming off a very easy trial win and Shinn believes it could do the job at Canterbury.

“He could easily win. He’s bred to stay by High Chaparral but his last trial win was ultra-impressive. He looked the goods and felt the goods. He has a great future once he gets to his optimum distance but good horses can win at any trip and I think he’s a talented horse.”

He also rides the Chris Waller-trained Sweet Fire ($8.50 at Sportsbet.com.au) and Chrysolaus in the final race of the season.

“Sweet Fire, I expect her to be a sharp improver from her first-up disappointment,” Shinn said. “The way the race was set-up she was found wanting when resuming. Gave me a great feel back at the trials since. She’s got to be a winning chance.

“As for Chrysolaus it’s hard to get a guide. He struck trouble in the Grafton Guineas and should have won. If I’m alive coming into the last it will be great to have a ride that’s going to be competitive in an open event.”

Hugh Bowman is currently on 94 wins with James McDonald on 92.5 and Shinn on 91.5. McDonald also has four rides and could win the premiership, but he is riding two horses at double figure odds.