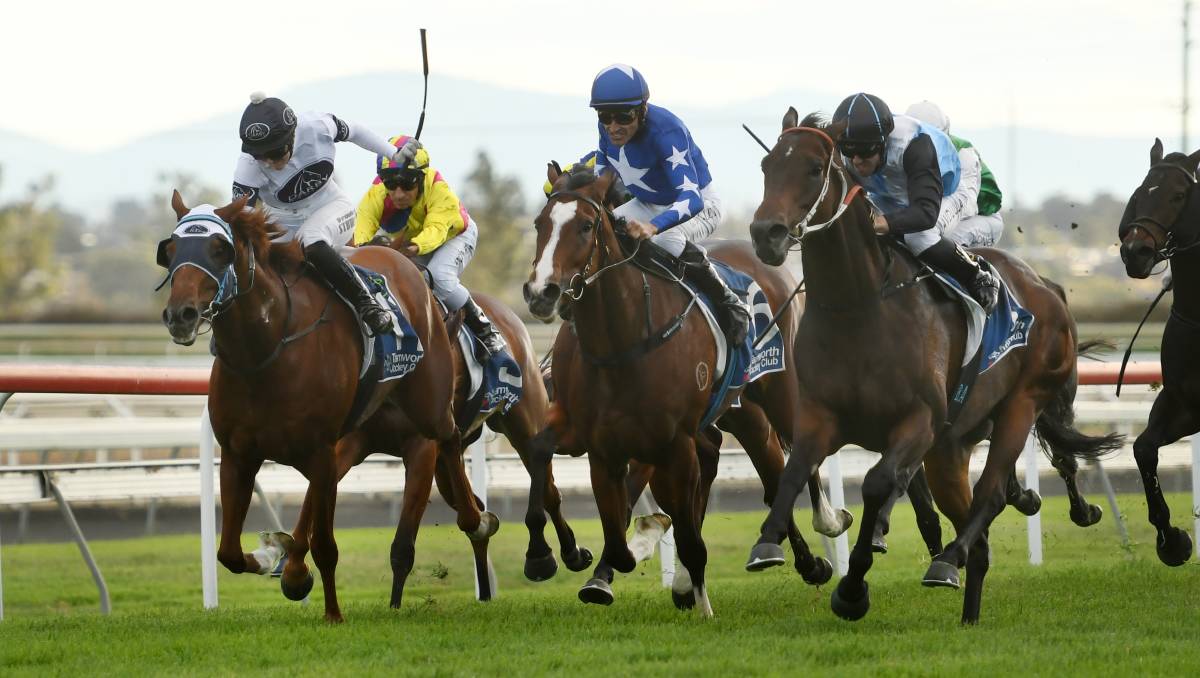 It was the first time Team Hawkes have had a runner in Tamworth, but the trip paid off when Bandersnatch claimed the $200,000 Tamworth Cup (1400m) on Friday.

Shouldering 62kg and ridden by Golden Slipper winning jockey Brenton Avdulla, Bandersnatch was second up after a good two-length fifth in the hotly run Group 3 Star Kingdom Stakes (1200m) on March 28 at Newcastle.

“Full credit to Team Hawkes, they had him cherry ripe today. It was a nice day out the other day, he got back, he relaxed good, he did everything right. He’s not an easy horse to ride and it just set him up well for today with the big weight.

“I was always confident a long way out and was able to follow the right horse through and he was able to get the job done,” Avdulla said.

After following the first four into the Tamworth straight, Avdulla found the gap at the 200m and got the run through the middle, racing clear for the one length victory.

Lugging a 62kg weight is a good leveller more often than not and likely contributed to the $6.50 starting price with online bookmakers, but Bandersnatch was all class.

“He’s got good genuine Group 2 and Group 3 form, he won with 59kg on his back in a Stakes race and getting beat 4-lengths by Lost and Running (in the $1m The Hunter on November 13), it’s solid form for a race like this.”

The win today puts Bandersnatch in the running for the $2 million Big Dance at Randwick on November 1.

“Looking forward to Melbourne Cup Day and we can hopefully get the mile,” added Avdulla.

Bred by Penelope Crowley, the five-year-old son of Casino Prince was a $42,000 purchase for Gerald Ryan at the 2018 Inglis Classic Yearling Sale from the draft of Amarina Farm. Bandersnatch racked up four wins for Ryan before going to the Hawkes stable at the end of 2020, since going on to become a three-time listed winner and boasting over $660,000 in prizemoney.

His success has been a nice reward for Crowley’s persistence with Bandersnatch’s dam Divine Faith, who was a $5,500 online purchase with a Kaphero foal at foot in 2013, a less than straightforward mare to breed with. Bandersnatch has been the headline act from the Falbrav (IRE) mare’s five named produce to date.

The Cameron Crocket-trained Constant Flight put in a very brave run. Leading from the jump after having to cross early from the wide barrier, the Written Tycoon gelding was headed by Ashman at the 1000m but fought back gamely down the straight under a great ride from Brooke Stower. Showing plenty of grit and determination they were able to hold on for second, putting Constant Flight in the running for the $2 million Big Dance also.

An impressive trial winner over The Country Championships favourite Far Too Easy at Scone in March, the horse went on for a good first win for the stable when taking out the 1280m Wayne Harris Showcase Handicap at Muswellbrook on April 1 before heading into Friday’s Tamworth Cup.

William Pike enjoyed a good day out, claiming three of the eight races for the local Tamworth trainers. Pike’s first for the day came in Race 3 aboard the Cody Morgan-trained Hombre before backing up in Race 4 on Mandalong Tapit for Sue Grills. Teaming up again with Morgan, Pike got Trumped Up home in the last to finish off a fabulous day of racing.