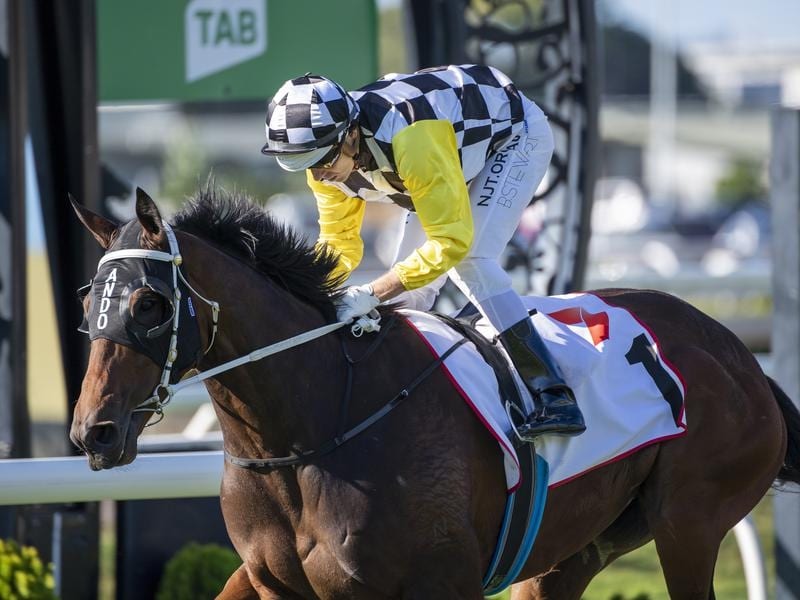 Trainer Chris Anderson’s luck finally changed when Ballistic Boy helped him achieve a boyhood dream by winning a Group race with a horse wearing the colours of the Think Big Stud.

Starting favourite, Ballistic Boy ($2.80) dispelled any notion he was not a genuine stayer when he beat Supergiant ($4.50) by 1-1/2 lengths in the Group Three Rough Habit Plate (2200m) at Eagle Farm.

Sydney gelding Navy Cross ($6) was a long head back in third.

Anderson has only been training fulltime for six years but he has built up a strong team with several smart horses from the late Dato Tan Chin Nam’s Think Big Stud.

“Think Big have been fantastic to me. As a boy I was a big fan of Saintly who won a Melbourne Cup in these colours,” he said.

“It was a dream to win a Group race with a horse wearing them and now it has come true.

“I have had three horses – Ballistic Boy, Plutocrat and Boomtown Lass – beaten in black-type races by about a nose in the past fortnight.

“The horses are racing well so I was confident my luck would turn sooner or later.”

Anderson had Ballistic Boy and Profit set for the Brisbane winter three-year-old races but had to change his plans several times.

“I felt Profit would be the best stayer but after the Gunsynd Plate I spelled him,” he said.

“Ballistic Boy showed me in the Gunsynd he had a future as a stayer and we pressed on with him.

“I will talk to Duncan Ramage from Think Big about the spring. We can have some fun with Ballistic Boy.”

Winning jockey Brad Stewart said he had been travelling well and knew he would win from the 700m.

“He got caught deep early but fought on very well,” he said.