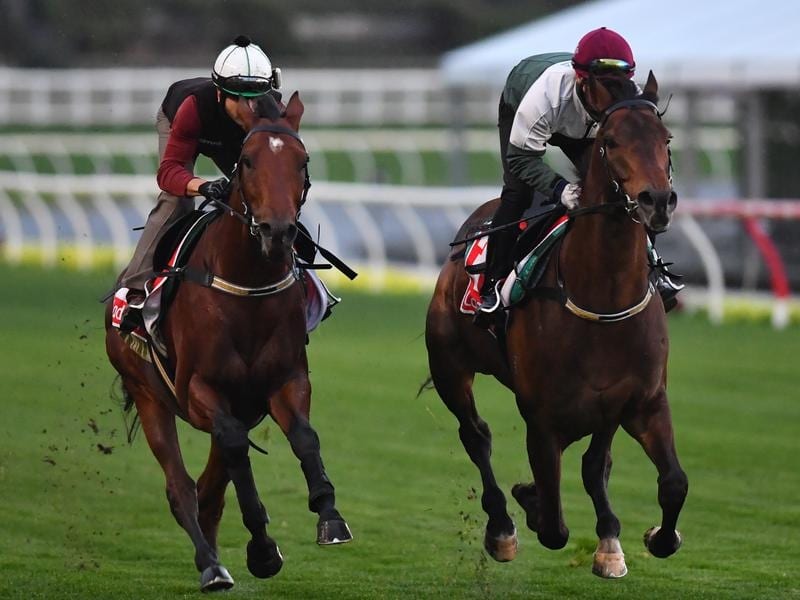 He made an immediate impression at his Australian debut with victory in the Group One Caulfield Stakes, and Cape Of Good Hope has ticked another box in his Cox Plate preparation by having a gallop at the Valley.

Cape Of Good Hope, a northern hemisphere-bred three-year-old now in the care of the Lindsay Park stable, was taken to The Valley on Saturday morning, a week out from the $5 million Cox Plate (2040m), to gallop with dual Australian Cup-winning stablemate and fellow Cox Plate hopeful Harlem.

Both horses are eligible for a $1 million bonus if they can win Saturday’s Cox Plate, with the Caulfield Stakes part of the bonus series while Harlem is eligible courtesy of this year’s Australian Cup win.

Harlem was third to Cape Of Good Hope in the Caulfield Stakes (2000m) and he led Saturday’s gallop with his stablemate about five lengths off him at the 600m.

Cape Of Good Hope moved up around the home turn and closed the margin to within a neck on the line.

Co-trainer David Hayes was happy with the work and what it achieved.

“Cape Of Good Hope followed Harlem around and they finished on terms,” Hayes said.

“It was an easy gallop, more just to see the track.

“They strode out at a bit outside evens and then ran home the last 600 in around 39 seconds, just stretching their legs.

“I think Harlem is hitting his form. I think he’ll probably peak in the Mackinnon Stakes but you’ve got to go for the bonus.

“And we saw Cape Of Good Hope in the Caulfield Stakes. He’s pretty good.”

Cape Of Good Hope was a $9 Cox Plate chance on Sunday with Harlem $51.

Last-start Group One Turnbull Stakes winner Kings Will Dream also had a hit-out at The Valley on Saturday.

Duckworth said both Kings Will Dream and Verry Elleegant, who galloped at The Valley last Wednesday, were scheduled to return for another hit-out at Tuesday morning’s Breakfast With The Best trackwork session with Hugh Bowman and James McDonald, respectively, to ride.

The Moonee Valley Racing Club committee will decide the make-up of the field on Tuesday.

There is a limit of 14 for the Cox Plate with up to 20 horses vying for berths.