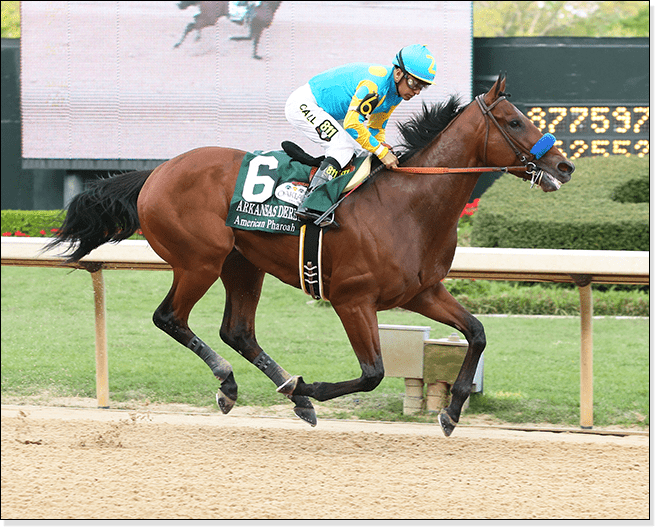 THE 2015 Breeders’ Cup carnival is one of the richest and most sought-after carnivals in world racing and this year we’re in for a special treat.

American Pharoah will end its career in the Group 1 Breeders Cup Classic and it has been installed the hot favourite with most bookmakers.

The American Triple Crown winner will not race after the 1 1/4 mile event, but there are plenty of classy horses looking to end its fairytale career.

We have all the markets covered for the major races on the program which also includes the $3 million Longines Turf and $2 million Sentient Jet Juvenile.

Take any Fixed Odds bet with Bet365.com and if your horse loses on protest, your bet is still a winner.

Some of the world’s best thoroughbreds have won the Breeders Cup Classic, including Zenyatta (2009), Mucho Mucho Man (2013) and Bayern in 2014.

The race is open to three-year-olds and older and it is limited to only 14 entries. The Bob Baffert-trained American Pharoah will attract most of the attention and deservedly so.

American Pharoah dazzled the world earlier this year by winning the Triple Crown (Kentucky Derby, Belmont Stakes, Preakness Stakes), but its track career will come to an end before it goes to stud.

The usual race-rivals Keen Ice and Frosted are also entered and the race was made easier by the withdrawal of quality youngster Shared Belief which was a +600 chance in the market.

There are two good bets in this race. One is backing American Pharoah at +100 with Bet365.com. Other bookmakers have the champion at -110 so the +100 on offer looks very enticing.

The other good bet is taking a saver on Gleneagles at +1100. The Aiden O’Brien European runner is top quality and if it can gain traction on the dirt track at Keeneland, the odds available could look silly after the race.

We’re leaving Frosted and Keen Ice out of our calculations. Both are quality runners, but they could be tested in this.

The $3 million Longines Turf is better suited to the European horses and it’s of no surprise to see Golden Horn at the head of the market.

Golden Horn is a Josh Gosden-trained colt which has already won quality races such as the Epsom Derby and the Arc de Triomphe in France.

That form is second-to-none compared to the quality of opposition it meets here and European runners have a good record in the Breeder’s Cup Turf.

Three Irish-bred horses have won in the past six years (Conduit, St Nicholas Abbey, Magician) and it’s fair to say Golden Horn would beat all three.

The odds are short, so include Golden Horn in your parlay bets.

With a soft track expected at Keeneland, after heavy showers throughout the week, there were some doubts over Golden Horn, but trainer John Gosden has given it the go-ahead.

“We are very clear we plan to run,” Gosden said. “We could have done without the rain but that’s life. The horse put in a nice canter on it this morning. He wouldn’t have been in love with it but he handled it well and Frankie was happy with him.

“There is a chance the ground could be on the good side by Saturday. The track is sand based. But we have had a tremendous amount of rain and you would expect it to run down to the inside because there is a camber on the track. You would expect the inside to ride a little slower.”

Golden Horn has had a long campaign which has constituted a lot of traveling, but Gosden believes it has grown into its frame and will be stronger for it.

“I have always said of all the horses I have trained he probably has the greatest constitution. He has grown this year nearly three inches and has filled out his frame,” Gosden said.

“He has put back all the weight he lost when winning the Arc and is in great order. He has thrived on his training.

“On the form he should win but the track is riding a little loose. We don’t how he will handle that and it is a tight oval. The US horses are very efficient around these tracks and it is always very demanding for our horses in these conditions.

“He is still three – I would always prefer to bring an older horse – and that is also demanding on him.”

The Breeders’ Cup Juvenile is one of the most even races on the card this Saturday with five horses paying +1000 or lower.

Current favourite is Nyquist at +400. The two-year-old colt for Doug O’Neill is unbeaten in four starts, having beaten Swipe (+1000) in its last three.

Of those four wins, two have come at Group 1 level (Del Mar Futurity, Frontrunner Stakes) so the class is there and now it can take its career to a new level.

Second favourite is Brody’s Line at +450 which won the Breeder’s Futurity in April. The Giant’s Causeway colt didn’t have everything go its way, but it was still too good for a hot field.

There are plenty of other chances and punters should be able to find a nice value runner in this.