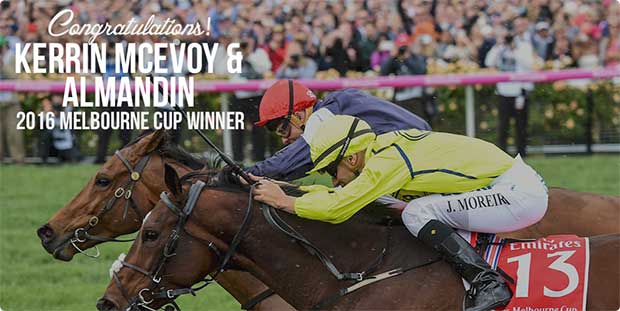 ALMANDIN raced into the record books on Tuesday, winning the 2016 Melbourne Cup and handing owner Lloyd Williams his fifth trophy in the great race.

The seven-year-old German import was purchased for the sole reason of winning a Melbourne Cup and the plan set by team Williams worked out perfectly as Almandin edged out the well-named Heartbreak City in the shadows of the post.

Winning jockey Kerrin McEvoy was delighted to win his second Melbourne Cup after saluting with Brew in 2000.

“How lucky am I? The elation is unreal,” McEvoy said.

“It’s a dream, great to be a part of it again, to win my second Cup. I love these staying races, I love the Melbourne Cup.”

McEvoy paid tribute to the job done by owner Lloyd Williams and the team at Macedon Lodge.

“They’re well prepared by Lloyd. He ran in October, he just gave him a nice little freshen up, typical of Lloyd. He knows what to do with these staying races,” McEvoy said.

“Stephen King gave me a call this morning, he’s a good judge, he said ‘look this horse is absolutely flying.'”

Lloyd Williams doesn’t often travel to Melbourne for the Cup, but the famous owner was on track to see Almandin give him his fifth Cup winner.

“(Kerrin McEvoy) gave it a super ride. Rob’s (Hickmott, trainer) done a super job with him up there.

Son of Lloyd Williams and part-owner of Almandin, Nick Williams, was happy to have his father by his side at Flemington.

“It’s fantastic to have him here, I probably caused him to be here,” Williams said.

“He’s now broken the record for the most amount of wins in the Cup for an owner, I’m so proud.”

Team Williams had multiple runners in the 2016 Melbourne Cup, but Almandin was a big firmer in the betting at $11 with CrownBet and Williams believed it was one of their better chances.

“Good that we were able to win the race. We thought he (Almandin) and Bondi Beach were our two best chances, but we really couldn’t split them.”

The well-named Heartbreak City finished second in a desperately close finish. Joao Moreira produced a brilliant ride and found a great spot in the running from barrier 23, but it didn’t have a drag into the race and that was the telling difference according to trainer Tony Martin.

“Everything went to plan, everything was great. Its just a pity he hadn’t something to tow us into the straight a little further.

“Other than that everything went well, couldn’t be happier.”

Hartnell ($2.35 to place at Sportsbet) loomed as the winner at the top of the straight, but it was quickly gathered in by Almandin and Heartbreak City. To its credit, the Cox Plate runner-up battled on well for third and lost no admirers.

“It’s been a lot of pressure on the team, he has been favoured for a long time, he’s come here and put in a fantastic performance.

“James (McDonald) said he was a little bit keen down the side – unless he gets a run to settle on straight away he does get a bit keen, but take nothing away from the winner and the second (horse) either.