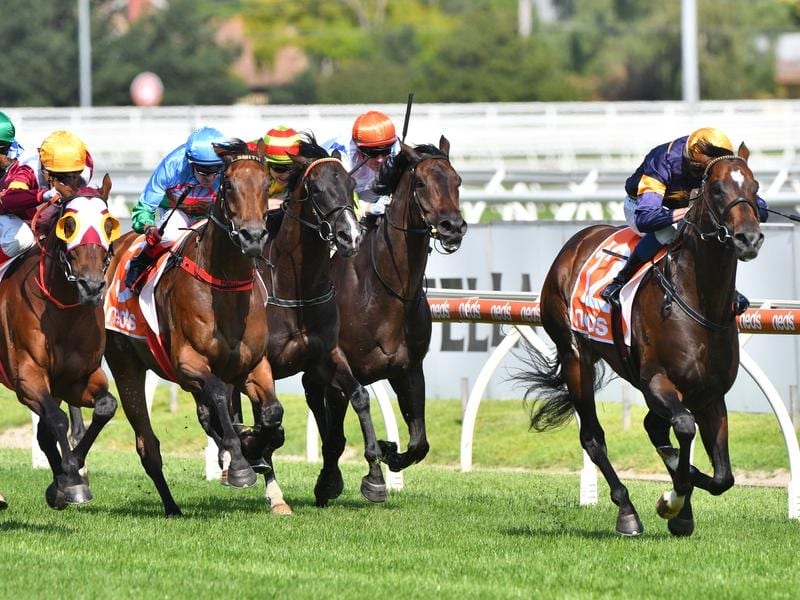 A plan to target the CF Orr Stakes with Alabama Express has been rewarded for his connections with the colt upstaging the older horses in the Group One weight-for-age race at Caulfield.

The Mike Moroney-trained Alabama Express had to do it the tough way from a wide draw in Saturday’s 1400m feature but he was up to the challenge and emulated his late sire Redoute’s Choice who also won the Orr as a three-year-old 20 years ago.

Alabama Express is the first three-year-old since All Too Hard in 2013 to win the Orr and Moroney said it was special to see the talented colt deliver on a plan hatched before he even returned to work this preparation.

Alabama Express was unplaced in the Group One Coolmore Stud Stakes for three-year-olds last spring after winning a stakes race at Caulfield and he returned in style in lesser grade at Flemington last month in his lead-up to the Orr.

“We knew when we came out of the Group One for three-year-olds in the spring down the straight if things had gone our way we were going to be right in the finish.

“Things didn’t go our way that day so we had to grin and bear that but he’s come back better and stronger and has really become professional now.

“He’s just a lovely colt. He’s probably more like his Dad than any other horse I’ve seen. And he’s done what Dad did.”

With Michael Dee aboard, Alabama Express was posted three-wide without cover just off the pace before making his run in the home straight.

Alabama Express ($11) held off a late surge from dual Group One winner Fierce Impact to score by a neck with Kings Will Dream another short head away third.

“He had the toughest run in the race and still won,” Moroney said.

“When I saw he couldn’t get in, I just thought it was game over.

With a valuable Group One win under the stallion prospect’s belt, Moroney said they may consider running him in the Group One Newmarket Handicap while the Matthew Smith-trained Fierce Impact is likely to head to the Chipping Norton Stakes in Sydney.

“At the 500 (metres) they really put the foot on the gas and got him chasing, but he was strong through the line and has obviously come back in good order,” Smith said.