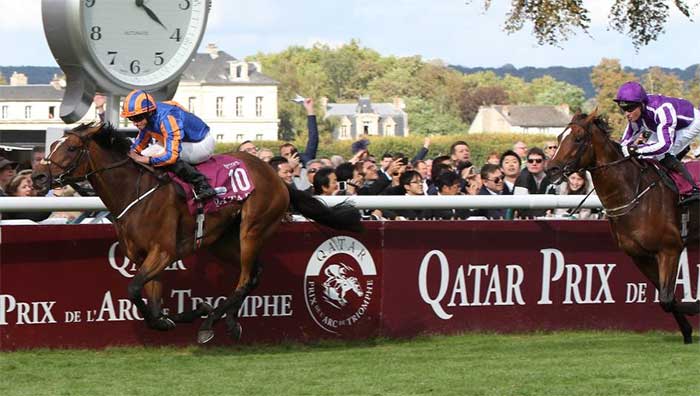 Found once again proved too good on the international stage by beating stablemate and Cox Plate place-getter Highland Reel by 1.75 lengths. The Lloyd Williams-owned Order of St George finished a further 1.5 lengths back in third.

O’Brien said the result was a dream and a career highlight.

“It’s a privilege to be here and be part of it. How can you see anything higher (in Found’s career) than this?” O’Brien said.

“I couldn’t dream this would happen. You know how difficult the Arc is.”

Found is an extremely consistent and highly underrated horse, which has finished second at group one level in its last five starts.

“She’s only run over a mile and a half four times before and she was unlucky in the Arc last year,” O’Brien said.

“We’ve had our eye on this for a long time. Ryan (Moore) rode her as a two-year-old and said she could win an Arc – he was obviously right.

“It’s a great feeling to saddle the first three home in an Arc, there’s not much to beat it, but it’s all down to a fantastic team effort and what makes it amazing is that they are all by Galileo – it’s a privilege to be here.”

Race favourite Postponed was disappointing in finishing fifth after seemingly getting every chance to show its best.

Found is currently a $7 chance at Sportsbet to win the Qipco Champion Stakes on October 16.

Caulfield trainer Henry Dwyer is planning an assault on the New Zealand Cup carnival at Riccarton in November, headed by talented filly Swampland.

Swampland was an impressive winner at Mornington on September 28 and could head to the Group 1 New Zealand 1000 Guineas on November 12.

“I’m not certain how it’s going to play out at the moment, but it’s been in the back of my mind for a while,” Dwyer said.

“Swampland will have her next start over 1400 metres on Caulfield Cup day and then go to Flemington on Melbourne Cup day. The 1000 Guineas is 11 days after so it will depend on a flight.

“She’s always been a filly we’ve had a good opinion of and she should have won her first start, but she was slow out,” Dwyer said.

“She’ll be better over a bit more ground as her pedigree would suggest.”

Dwyer also plans on sending over Sonntag for the New Zealand Cup (3200m) and is confident the former quality winner is back to its best.

“He’s due to run over 2800 metres on Melbourne Cup day – he’s a bit of a grinder and he’s competitive at 2400 metres and further so the New Zealand Cup would be a nice race for him,” Dwyer said.

“He’s had six months off and a good spell could be the making of him. I think this could be his best preparation.”

Sportsbet.com.au has released its all-in market for the 2016 Caulfield Guineas this Saturday and what a field it has produced.

Talented Godolphin runner Impending heads the market at $4.20 after its impressive win in the Group 2 Stan Fox Stakes at Rosehill.

The colt by Lonhro is a group one winner in the making according to stable rider James McDonald.

“He’s a good horse in his own right,” McDonald said. “I think he’s a group one horse for sure, he’s in the shadow of Astern. He’s got a great turn of foot and a great nature.

“He’s full steam to the Guineas and he’ll be hard to beat.”

On the second line of betting is Divine Prophet at $4.80. The Hawkes-trained colt finished a close second behind Impending last start and the extra distance looks ideal.

New Zealand juvenile champion Sacred Elixir has been well supported at a value price of $7 following its win in the Caulfield Guineas Prelude. The Prelude is always a good form guide, but bookmakers are believing the Sydney form will stack up better.

Sacred Elixir is a group one winner of the J.J. Atkins and will likely firm in the market throughout the week.

For a full market head to Sportsbet.com.au