A week in racing – 2015 Easter Sales start with a bang 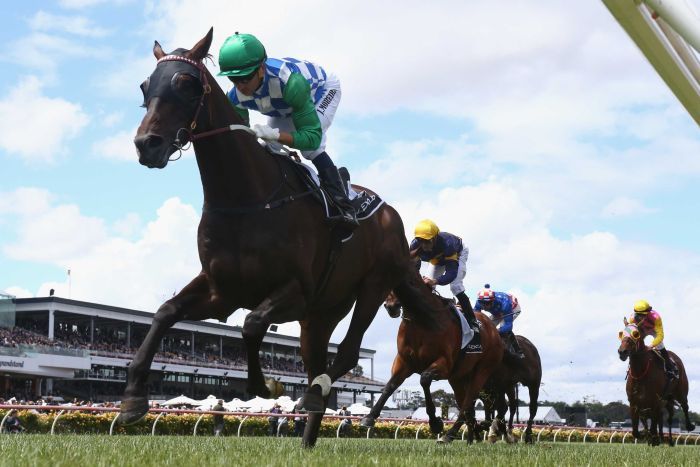 THE 2015 Inglis Australian Easter Yearling Sales has started with an almighty $2.2 million bang.

A private purchase made eight years ago for John Muir has paid off very nicely at day two of the Easter Sale.

Muir sold a colt by Snitzel out of Admirelle for $2.2 million to none other than Sheikh Mohammed bin Khalifa al Maktoum.

The colt is the brother to Group 1 TJ Smith Stakes winner Sizzling and it gave sire Snitzel the top two purchase prices at the sales so far.

Muir purchased Admirelle privately for his Milburn Creek Stud after being offered the mare for sale at $150,000 by agent Jon Freyer.

The mare didn’t start its stud career off very well, missing to Starcraft in her first season before delivering a colt foal by Nadeem that was euthanised shortly after birth.

Admirelle’s luck would quickly change for the better as it produced Sizzling, which eventually sold for $260,000 as a yearling. Sizzling is now at stud after a career which earned it over $1.3 million in stake earnings with a record of 23 starts for seven wins and five placings.

Its 2013 colt was fancied by many prospective buyers, but Muir was unsure how much it would make in the ring.

“My manager Scott Holcombe told me he did not think we would get to offer a colt of this quality again,” Muir said.

“He thought he was the nicest yearling he’d ever brought to a sale.

“He had all the right people look at him and he sold accordingly.

“I’d say after this we will be sending her back to Snitzel again this year,” Muir added.

The other Snitzel colt was sold to David Raphael after he bid $1.8 million for the colt out of champion mare Alinghi.

“I opened strong and I was going to buy him,” Raphael said.

“We’re hoping we’ve bought a stallion. It’s a lot of money to pay but if he turns out to be the horse we think he can be he’s a cheap horse.

“It’s an expensive game but we’re having a go.”

“He’s a big strong colt, we liked him, the blood is there, he’s got the right page,” he said.

“We knew he was going to be expensive and we got him.”

Jockey Nick Hall will be compensated for losing the ride on To The World in Saturday’s Group 1 Queen Elizabeth Stakes after stewards determined he held a confirmed engagement for the horse at a hearing on Wednesday.

Hall rode the Japanese star for second in the Group 1 The BMW at Rosehill, but was informed on Tuesday that he would be replaced by top international jockey Zac Purton.

To The World is currently paying $4 to win at Sportsbet.com.au and now Hall will receive $118,800 if it wins on Saturday.

“I was contacted by the racing manager to ride both horses for both starts,” Hall said.

“I have countless text messages.”

Trainer Yasutoshi Ikee confirmed that Hall had been booked to ride the galloper for both starts, but an alleged failure to carry out instructions in trackwork and races led to the connections’ decision to find a replacement jockey.

Hall stated that no negative feedback had been received in relation to trackwork or race rides.

“This is the first I’ve heard of any criticism,” Hall said.

The result meaning Nick Hall will receive a 4.95 percent fee of any winning or place prizemoney earned by To The World in the Queen Elizabeth Stakes.

*Some form guides state Nick Hall to be riding To The World, but Zac Purton is the confirmed rider.

Moore to partner Kiwi in Queen Of The Turf

The leading international jockey has ridden Group 1 winners in 11 countries and this will be his first ride aboard a New Zealand-trained horse.

Diademe is a last start winner for Murray Baker and Andrew Forsman – who won the ATC Australian Derby last week with Mongolian Khan – and Baker said he was more than happy to have secured the services of Moore.

“Diademe is owned by Waikato Stud and they wanted to have a go, it’s a million-dollar race and that’s great money,” Baker said.

Kiwi jockey Opie Bosson will ride the trainers ‘other entrant Sports Illustrated ($34 at CrownBet.com.au) but the four-year-old has been dealt the harsh draw of barrier 13.

“It doesn’t really matter at Randwick but we’ve got good jockeys on and they’ll be able to work it out,” Baker said.

Diademe ($26) drew even worse in barrier 15 and will likely head forward from the draw.

The $385,000 Provincial Championship field is set for Randwick this Saturday and trainer Bede Murray has three of the 18 runners engaged.

Murray lines up current favourite Sure And Fast ($4.20 with Sportsbet.com.au), one of three runners the Kembla Grange trainer has in the field.

O’reilly’s Revenge ($12) and Darci Magic ($8.50) are also strong chances in the new format that has been met with positive review.

The biggest danger to Murray’s triple-threat is the Tony McEvoy-trained Harmonic which has won its last three. The six-year-old will be ridden by Tim Clark from barrier 15 and it’s currently on the second line of betting at $4.60.