500 at the Valley for Fownes; Moreira and Purton take three each 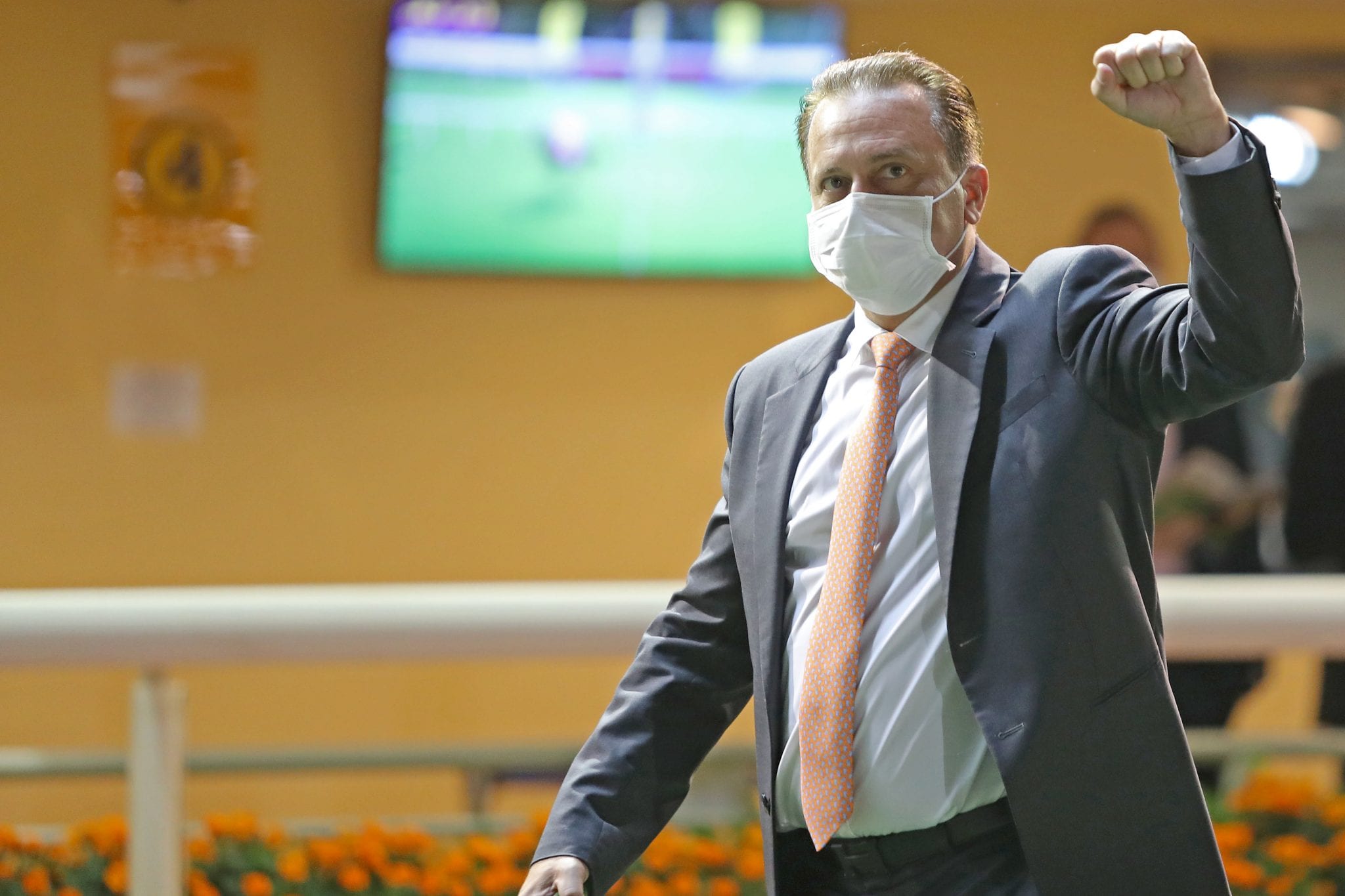 Explosive Witness ensured Caspar Fownes’ moniker as the ‘King of the Valley’ rang true at Happy Valley last night (Wednesday, 25 November) as the handler brought up a significant milestone with his 500th win at the city circuit in the Class 2 Chai Wan Kok Handicap (1000m).

Fownes has the most wins at the Valley of any active trainer on the roster, his heroics at the course include six wins in a day, and this term, he has 17 wins under the Happy Valley lights – the most of any handler this term.

“I love this track – it’s been really good to me, I’m pretty good at placing my horses here and you need a lot of luck when you come here as well,” Fownes said.

Fownes was first licensed for the 2003/04 season and he landed the first of three champion trainer titles not long after in the 2006/07 season, and among 916 Hong Kong wins in total, he’s forged a brilliant career presenting heroes of the turf like Lucky Nine, The Duke, Super Satin, Green Birdie and Southern Legend.

“This is what the game is about, whether it’s Class 5 or Group 1 – I just love it, I’m passionate, I always give it everything,” Fownes said.

The championship leading trainer takes his seasonal tally to 28 wins as he puts the foot down in his bid for a fourth title with a midweek double.

“I said to my boys at the start of the season that I’m going for it this year, I think we’ve got the horses spread across the classes and I’m just going to put the foot down and see what happens – if I win, I win and if I don’t at least I gave it my best shot,” Fownes said.

“That horse is special to me – we bought him from one run, he had a hefty price tag on him and he came here and he just drove me nuts – it broke your heart,” Fownes said.

The Australian import won on debut at Moonee Valley pre-import in March, 2017 but had to wait three years to break his duck in Hong Kong.

“Every time you’d get him prepared for a race it’d just go by the wayside and you’d just have to build him up again,” Fownes said. “He missed well over a year it was well documented and I just knew he had so much talent.

“It’s so nice to now see that when owners are patient and now he’s on his way to paying them back and he’s won his last three – he can certainly close off with a massive sectional here,” Fownes said.

The 86-rater scored at his first try in Class 2 this evening against a solid field under Alexis Badel, who earlier kicked off his double with victory aboard the Frankie Lor-trained Virtus Star in the Class 5 Yau Kom Tau Handicap (1650m).

“The horse has been brave and courageous and he showed one more time he was very competitive and he’s in great form this season,” Badel said.

The Sebring gelding took 22 starts to snare his first Hong Kong win, and now, has three in succession and sits on the cusp of a step up to Class 4 with a pre-race rating of 31.

The win was the first of a double for Lor, who secured the second section of the Class 4 Tai Lam Handicap (1200m) with the lightly raced Rewarding Together under Joao Moreira.

Moreira and Purton take three each

Championship leading jockey Joao Moreira bagged a treble, as did current champion jockey Zac Purton, starring on last night’s fixture at Happy Valley with six wins between them as two of only three jockeys to win a race on the card.

Moreira kicked off evening with Frankie Lor, but closed it out with powerful ally Caspar Fownes aboard Royal Racer in the Class 4 Tsing Lung Tau Handicap (1650m).

“I said to Caspar (Fownes) it wasn’t a pretty ride but very efficient because I had to come wide at the last corner but I knew what I had underneath – I had a full horse underneath.

“I pretty much looked after him in the first half and when I pulled him out and asked him to get going he responded very well and he ran away from them,” Moreira said.

Moreira’s three-timer featured a win aboard Ambitious Heart for trainer David Ferraris in the first section of the Class 4 Tai Lam Handicap (1200m).

Meanwhile Purton, the reigning champion jockey, kicked off his treble in the first section of the Tsing Lung Tau Handicap (1650m) aboard Total Power for trainer David Hall. The win was the jockey and trainer’s fourth together this term.

The five-year-old bay spent the off season at Conghua and bounced into the winner’s enclosure following two trials at his 11th Hong Kong start.

“He’s another horse that we have had in Conghua, he had his first trial there and I think it certainly hasn’t hurt him,” Hall said.

The Dundeel gelding was a two-time winner pre-import, also placing at Listed level in the Inglis 3YO Guineas at Scone Racecourse to Wild Planet, who subsequently won the Group 2 Theo Marks Stakes (1300m) at Rosehill Gardens Racecourse.

“Every horse that has come back from Conghua has performed really well for us so we’re really happy with the way things are going up there and it certainly contributed to him winning first-up over 1650m with 133 pounds on his back,” Hall said.

Tonight’s win is the Melbourne Cup-winning handler’s 12th success this season. “All the preparation work was done at Conghua so another tick for the team up there and also the facilities,” Hall said.

A well-judged front-running ride from Purton followed in the Class 3 Kap Shui Mun Handicap (1200m) aboard the Danny Shum-trained Grateful Heart, who made all for a tidy half-length success.

“He’s just taken a little bit of time to strengthen up, he showed some ability in his early trials but under race pressure he was a little bit weak,” Purton said. “This season he’s had the benefit of the off season and like a lot of horses he’s just come back better for it,”

Purton closed out his three with victory in the finale aboard ex-John Gosden trainee Holy Heart who scored back-to-back wins at the Valley, taking the Class 3 Sham Tseng Handicap (1650m) by a neck.

Neil Callan’s recent run of form has paid dividends with the Irishman earning the coveted sixth and final spot on the Hong Kong team for the LONGINES International Jockeys’ Championship on 9 December at Happy Valley.

The 42-year-old landed six wins from the previous four race meetings to lift his haul to 11 for the term.