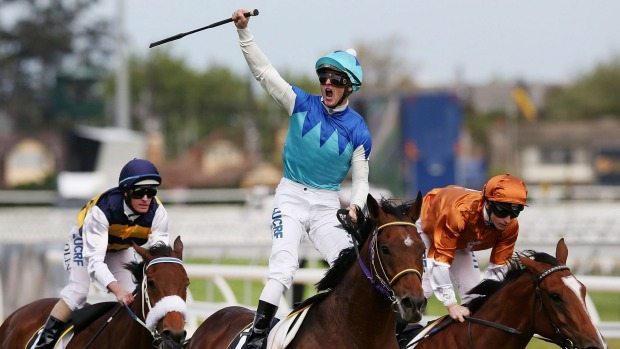 The 2014 Melbourne Cup is just seven sleeps away and there is now just 40 horses remaining in contention to take out Australia’s greatest race after the closure of second acceptances yesterday.

At the top of the list and exempt from the ballot is Japanese star Admire Rakti which stormed into calculations with a dominant win in this year’s Caulfield Cup over 2400 metres. The son of Heart’s Cry and Admire Teresa ( by Helissio) is also the favourite to take out the race that stops a nation, currently showing odds of $5 with Sportingbet.

Admire Rakti is just one of 11 international horses to be inside the top 24 and assured of a start in the two-mile race and, if all of them do line up on the first Tuesday in November, it will equal the record of 11 international runners from the Cup of 2011, taken out by French stayer Dunaden.

Another noteworthy international is German galloper Protectionist. He is currently the second favourite for the Cup at $6 with Sportingbet and is seventh in the order of entry courtesy of his win in the Group Two Prix de Kergolay over 3000 metres in France. Sired by Monsun, the sire of last year’s Melbourne Cup winner Fiorente, Protectionist has only been unplaced once in nine starts and that was at his first and only run in Australia when he ran fourth in the Group Two Herbert Power Handicap.

2012 Melbourne Cup winner Green Moon is second in the order of entry and is presently $51 with Sportingbet to land the cash while Fawkner, last year’s Caulfield Cup winner and runner-up in Saturday’s Cox Plate, is third and currently $10 to win with Sportingbet.

Red Cadeaux, runner-up in last year’s Melbourne Cup, is second in the order of entry and is rated a $17 shot with Sportingbet. He hasn’t won since taking out the Group One Hong Kong Vase at Sha Tin in 2012 and has only had four starts since his last trip to Australia. His last start resulted in a fourth placing at Newbury behind Seismos in the Group Three Freer Stakes.

Seismos is 11th in the order of entry after yesterday and is at $26 with Sportingbet. He is a very well-travelled galloper, having races in seven different countries and at Group One level on six occasions, with his sole win at the elite level being in the Bayern Stakes over 2400 metres in Germany last year.

Lucia Valentina, currently $6.50 with Sportingbet, is another leading chance and is a definite to take her place in the Cup as the 10th horse in the order of entry. The Kris Lees- trained mare is also nominated for Saturday’s Myer Classic over 1600 metres as a precaution to ensure she doesn’t miss any work in the lead up to The Melbourne Cup after a wet and wintery start to the week.

The most notable withdrawals include Silent Achiever, which bounced back to form when running third in Saturday’s Cox Plate, Kirramosa, Hawkspur, Zanbagh and Black Tycoon.