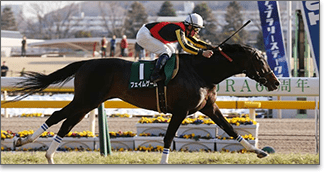 CURRENT Melbourne Cup favourite Fame Game has been confirmed to make the trip to Australia for the Spring Carnival.

Racing Victoria announced that connections of the Yoshitada Munakata-trained runner have confirmed that it will head to Melbourne for the Caulfield and Melbourne Cup.

The current $15 favourite at Sportsbet.com.au has already won the Group 3 Diamond Stakes this year and Racing Victoria’s scout Leigh Jordan is happy with the decision.

“We know just how impressive these Japanese stayers are, so it was fantastic to receive confirmation overnight from Sunday Racing co. that Fame Game would be contesting the Caulfield and Melbourne Cups,” Jordan said.

The five-year-old finished second in the Group 1 Tenno Sho over 3200 metres and it has always been a great guide for the Japanese stayers coming over to Australia.

Fame Game will race in the same colours as 2006 Melbourne Cup winner Delta Blues and punters will likely warm to it once it arrives in Victoria.

Stewards will announce whether they will suspend five trainers facing cobalt charges on Monday afternoon.

Peter Moody, Lee and Shannon Hope, Mark Kavanagh and Danny O’Brien all appeared before Racing Victoria to show why their licenses shouldn’t be suspended due to charges of elevated cobalt levels from their runners last year.

Stewards adjourned all hearings on Wednesday to consider the defences of each trainer’s legal team.

Lee and Shannon Hope have confirmed a date with the Racing Appeals and Disciplinary Board which will hear their case in the week before the Caulfield Cup.

Another season is in the books and now the nominees have been released for the 2014/2015 New South Wales racing season.

There were plenty of highlight moments this season, including the 2015 Golden Slipper win by Vancouver and the talented two-year-old has been duly nominated for the 2YO of the year.

Other quality horses involved in the awards will be Brazen Beau, Terravista, Winx, Criterion and Lucia Valentina which qualifies as a “NSW Provincial” horse.

NSW 2YO of the Year:

Odyssey Moon
Pride Of Dubai
Vancouver ($3 at Sportsbet.com.au for the 2015 Golden Rose)

NSW 3YO of the Year:

NSW Sprinter of the Year:

NSW Miler of the Year:

NSW Stayer of the Year:

Queen of the Autumn:

The Chris Waller-trained Marenostro has been a punters friend this season and it will likely run as the short favourite at Rosehill this Saturday.

The five-year-old has won four from five starts this campaign and after being scratched last Saturday, punters have a chance to get back on the bandwagon.

“I think the two week gap between runs is important for him if I am going to stretch his campaign out, make the most of the entire winter,” Waller said.

Its form on wet tracks is very solid with seven starts for five wins and two placings, and Waller believes it’s best suited to that footing.

“This is the right time of year for him as we know he’s a wet tracker,” Waller said. “I have been wanting to try him over longer so Saturday’s race looks an ideal opportunity.

“Once he’s furnished I am hopeful he can go on the dry as well, but for now, while these winter tracks are hanging around we will just try keep him winning.”

James McDonald rides on Saturday and it has been installed as the early $2 favourite at Bet365.com.au.