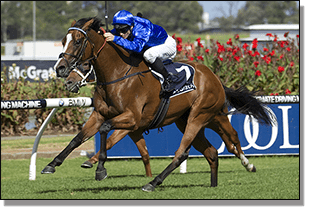 THE Group 2 Chelmsford Stakes features a field that would normally run at Group 1 level, with horses such as Hartnell, Pornichet and Doncaster Handicap winner Kermadec all lining-up.

The $250,000 race over 1600 metres is the major stepping stone to both Melbourne and Sydney spring carnivals and the winner will be well placed for the future.

We have analysed the field and given our three best chances, as well as tips for some of the major under card races at Randwick this Saturday.

Get up to $501 in free bet bonuses upon sign-up with Sportsbet.

The Gai Waterhouse-trained Pornichet looked ready to go last start and its effort behind Royal Descent was very credible. The five-year-old import looked all quality when winning the Group 1 Doomben Cup last campaign and it has already won twice second up. The wide draw of 11 doesn’t concern as it likes to roll forward, so expect the usual gritty effort from Pornichet at odds of $5 to win.

Hartnell is fresh up and the bookmakers have installed it as the $3.40 favourite. The John O’Shea-trained import has won two races in Australia, including the Group 1 BMW at Rosehill where it defeated To The World by 1.25 lengths. It was very disappointing as the $1.65 favourite in the Group 1 Sydney Cup where it looked to have everything in its favour, but 6.8 lengths behind Grand Marshal was all it could offer. It has looked sound in its trials, so consider in this.

Kermadec had ‘next up’ written all over it last start at Randwick. The four-year-old was slow, but finished off strongly to finish fifth and the extra distance will only helps its chances. The Doncaster Handicap winner is on a Cox Plate path and with more racing this preparation, it will strengthen up nicely towards the spring. This race might be a touch too early, but punters are taking the odds. It opened at $4.60 and is currently sitting at $4.20.

Check out Pornichet taking out the Doomben Cup last prep – is a repeat performance on the cards this week?

Kimberley Star has looked a quality horse this campaign by winning three straight and running on strongly behind a smart type last start. The Gai Waterhouse-trained filly is having its ninth run this preparation which could count against it and it does rise up to 58kg. Bookmakers opened it as the favourite and punters have backed it firmly into $3.

Cannyescent was desperately unlucky in the Up and Coming Stakes at Randwick last start. The eventual winner Shards interfered with the three-year-old and it never saw daylight after that. The Gabrielle Englebrecht-trained son of Canny Lad was a stylish debut winner at Goulburn and whilst this is a step up in class, it looks to have a bright future. It opened at $5.50 and has been supported solidly to $3.80.

Voilier has been disappointing since winning on debut, but it has placed in its last two starts. The son of Beneteau was second to Sebring Sun two back and it was nailed late to finish a half-length behind Shards last time out. It has drawn wide in barrier eight which won’t help its chances, but consider at odds of $5.50.

Last start winner Speak Fondly has been the best backed runner in this field. The Waterhouse-trained filly was a quality 1.25-length winner over Kimberley Star in the Group 2 Silver Shadow at Randwick. In five career starts it has not escaped the highest quality of race and it now has two Group 2s beside its name. It opened at $3 and was bet into $2.60, but has since settled at $2.70.

Stablemate English won its first two career starts before running second to Vancouver in the Group 1 Golden Slipper. It then backed up in the Sires’ Produce but it didn’t handle the soft track conditions. It is expected to be soft this Saturday and punters are only keeping it safe in the market at $4.20. Expect improvement out of this race moving forward to the spring.

Serene Majesty deserves to be well backed after an effortless 5.25-length victory at Canterbury. The win was only at midweek level, but it captured everyone’s attention and it is very safe in the market at $7. We’re expecting that price to stay steady on the day and the $2.15 for the place seems enticing.

First Seal will likely run as the favourite, but it hasn’t been confidently backed. It opened at $3.30 and has drifted out to $3.70. That’s not the betting drift you want to see with this runner, but it has won and placed fresh up and it likes running at Randwick. The biggest deterrent for punters is the barrier of 18 and it will have to find cover over the short-course distance. Prepared to risk at that price.

Hauraki might be the forgotten horse and whilst this distance might be short of its best, it has won twice at the 1400 metres. The John O’Shea-trained gelding broke through for a Group 2 win in the Tulloch before running second behind Mongolian Khan in the ATC Derby. It has trained well for this and expect it to be right in the mix at odds of $10.

The Gai Waterhouse-trained Arabian Gold has attracted plenty of support in the market. Despite a very poor campaign in the Autumn, the five-year-old mare is a $7.50 chance in this and that must all come down to the track conditions. It has won five from eight on the rain affected ground and if it continues to rain, its chances increase significantly. It will need luck from barrier 15.