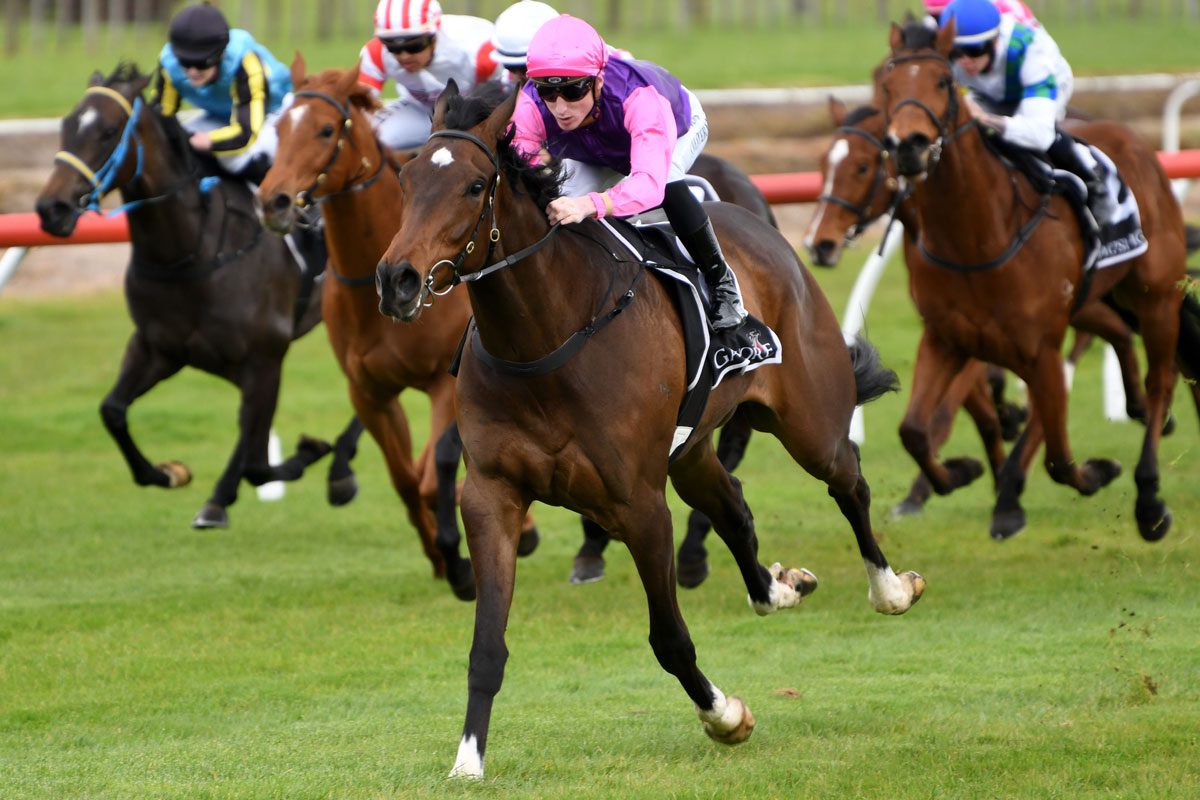 Three-year-old gelding Denby Road is yet another example to never judge a book by its cover.

Prepared by Shelley Hale, the giant son of Shamexpress was not expected to be seen on raceday as a spring three-year-old.

But natural ability has taken the big-framed galloper a long way.

On the back of two trial victories, the most recent at Tauranga in emphatic fashion, Denby Road was able to repeat the dose on debut at the Bay Of Plenty course, cruising to victory in the Fresh Market, Gate Pa Shopping Centre 1200m maiden on Sunday.

Bred and raced by George and Maryanne Simon, Denby Road has subsequently firmed into +1300 for the Group 1 Al Basti Equiworld Dubai 50th New Zealand 2000 Guineas (1600m) at Riccarton on November 5, a race won by his close-relation Turn Me Loose.

“When he arrived in the stable he had been broken in as a yearling and we did a little bit with him and then he went out because he was so big and fumbly,” Hale said.

“He came in the second time and we still thought he would take until he was a four or five-year-old before he got to the races, but he just kept stepping up and was handling everything brilliantly.

“He learned how to carry himself and he has just gone ahead in leaps and bounds ever since. He has never taken a backward step.

“George Simon thought I was pulling his leg when I said I was going to send him to the trials as a late two-year-old.

“He went out after that first trial win and came back after that, bigger, bolder and stronger and he has just carried on.”

Having sat on-speed in both of his trial victories, Denby Road’s tardy beginning was a surprise to trainer and punters alike, with the gelding starting a -200 favourite.

However, jockey Sam Weatherley never panicked and Denby Road quickly rounded up his rivals soon after straightening, going on to score by nearly three lengths without being urged.

“I wasn’t nervous before the race because all I can do as a trainer is get them ready, and I knew I’d done that. But when he was last out, I thought ‘crikey, this is going to be hard to overcome’,” Hale said.

“He is super talented, that’s for real.

“I kind of expected today that he would be on-pace again. Every time we have had him through the gates he has just hopped out quickly and put himself on-speed.

“We have just let him progress very naturally and haven’t put any pressure on the horse, so we know he is a talent, but we haven’t got any pre-conceived ideas of what the pattern is he is going to follow.

“He does hold a nomination for the Guineas and it is a bit of a pipe-dream, but he has taken a good first step today.”

Denby Road is likely to be seen next at Matamata in a couple of weeks in a three-year-old 1400m event before hopefully carrying on to the Group 2 James And Annie Sarten Memorial Stakes (1400m) at Te Rapa on October 22.

“That is quite a nice little program towards the big dance, but we will just see how he comes through and take it step by step,”

A Group One-winning trainer, Hale has previously prepared the likes of five-time winner Ted’ll Do for the Simons, while she also had New Zealand Derby fourth Midnitemagicman early in his career.

“I had Midnitemagicman for George and Maryanne before he went to Donna Logan when I got crook. They are great friends and it is great to have a good horse for them,” Hale said.

“It is pretty exciting to have a horse like this. It is a hard game training, and this is what you do it for. It is especially rewarding when they come from nowhere in some regard.”