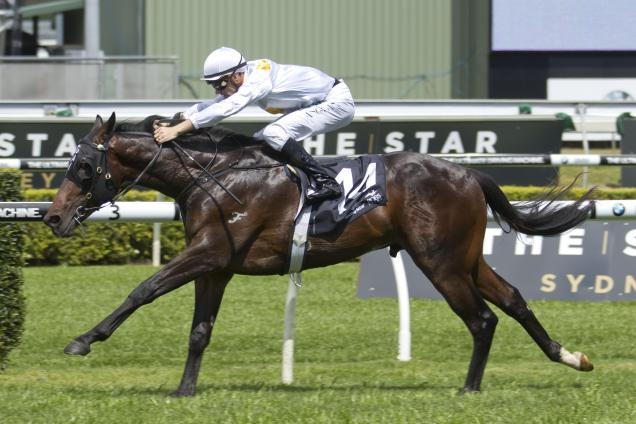 THE Gai Waterhouse-trained Vancouver has firmed into favouritism for the 2015 Group 1 Golden Slipper after scoring a terrific victory in Saturday’s Group 2 Todman Stakes at Randwick.

The colt recorded the fastest 1200 metres ever run by a two-year-old at the famous Sydney course, running a scintillating 1min 8.83sec.

The son of Medaglia D’Oro and Danehill mare Skates is now $3.00 with William Hill to take out Australia’s most prestigious two-year-old event, which will be run at Rosehill on March 21.

Former favourite Headwater has drifted from $3.70 to $8.00 and is now third favourite behind Vancouver and Exosphere, which is rated a $5 chance. No other runner is under double figures with William Hill, with the next best in the market being Furnaces at a juicy $11.

Waterhouse was full of confidence after Vancouver’s win on Saturday, saying the the colt was dominant in his class and was the type of horse which could win a Golden Slipper.

The legendary lady of racing knows exactly what it takes to win, having trained the winner of the Golden Slipper on five occasions, most recently with Overreach in 2013.

Tommy Berry partnered Overreach two years ago and also rode Vancouver last weekend, with the leading hoop now proclaiming his mount has what it takes to win not just the Golden Slipper, but the lucrative two-year-old triple crown which also consists of the Sires Produce and Champagne Stakes.

Vancouver will be looking to become just the seventh horse in history to win the triple crown, most recently claimed by Pierro in 2012 — another Waterhouse-prepared superstar.

While markets are not yet available for either the Sires Produce Stakes or the Champagne Stakes, punters are able to cash in on the market of whether a two-year-old will win the triple crown.

Odds of $13 are available with William Hill for those who think Vancouver is good enough to etch his name alongside the greats, this price firming in from a massive $31 which was available prior to Saturday.