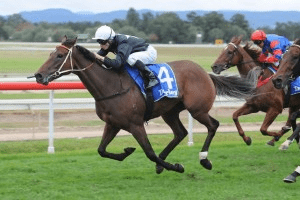 LAST start Toowoomba Cup winner Pornichet is backing up a week later and will likely start as the favourite for the Group 1 $650,000 Doomben Cup.

The Gai Waterhouse-trained runner was meant to have taken part in the Hollindale Stakes but didn’t get a run, so Waterhouse opted for the Toowoomba Cup where it blitzed rivals, carrying 60.5kg in the process.

The imported runner heads betting at $4.20 with Sportsbet.com.au over Hollindale Stakes winner Leebaz at $5.50.

There is only one other runner in single figures, which is New Zealand mare Silent Achiever ($9.50). The Roger James-trained mare overcame a bout of colic after its most recent run – almost ending its career – but James has pressed onto the Doomben Cup.

Our Boy Malachi faces its toughest test in BTC Cup

The $500,000 Group BTC Cup at Doomben this Saturday could be one of the best in the event’s history, with three real stars of the track set to battle.

The Hawkes’-trained Our Boy Malachi “The Rockhampton Rocket” has been a revelation since arriving in Sydney, but this is by far its toughest test to date.

The six-year-old has won an incredible 17 from 19 starts with its most recent win coming in the Group 3 Hall Mark Stakes, but the gelding will be facing a massive rise in class and some very talented horses at that.

The biggest danger will come from the Ciaron Maher-trained Srikandi, which resumed racing after almost a year off with a tough Group 2 Victory Stakes win over Ball Of Muscle.

The four-year-old mare has now won seven from nine and the track conditions won’t be an issue. It has won both starts on a heavy track and is more than capable of running on a dry track.

The daughter of Dubawi has drawn wide in barrier 11 but expect it to sit handy and be very tough to run down. It is currently on the second line of betting at $5 with WilliamHill.com.au.

Trust In A Gust is another danger to Our Boy Malachi and will be looking for redemption after being upset last time out.

The Darren Weir-trained horse was the $1.95 favourite when fresh up in the Vobis Gold Sprint at Caulfield, but it was run down by $41 chance Red Bomber.

Its form prior was excellent with wins coming in the Group 1 Rupert Clarke and the Group 1 Toorak Handicap, so it has plenty of experience at this level.

Bookmakers currently have the four-year-old at $8 which is great each-way value.

*Prices shown as best available across our recommended bookmakers

El Roca showed last season that it’s not to be overlook and it has been nominated for the $2 million Group 1 Stradbroke Handicap this winter carnival.

The Trent Busuttin and Natalie Young-trained runner hasn’t raced since last year’s Doncaster Handicap, but its prior efforts indicated strong ability and it appears a strong chance in this Saturday’s BTC Cup.

It finished third behind Dissident and Terravista in the George Ryder and first-up that campaign it comfortably beat Dissident in the Eskimo Prince over 1200 metres.

It was set to run at Flemington last spring, but was scratched after injuring a suspensory ligament.

“He needed four months off and then we had to decide whether we would push him to be ready for the latter part of the Sydney autumn, or bring him up more slowly and aim at the three Group 1’s in Brisbane,” co-trainer Trent Busuttin said.

“Winning a Group 1 is the main aim with him and with $2 million on offer this year, the Stradbroke is a nice target.”

Busuttin had planned to give El Roca ($16 at Sportsbet.com.au) a trial at Te Teko in New Zealand, but the wet track stalled those plans.

“I did want to give him a good trial, but having not raced for 13 months, I don’t want to burn him out on a wet track in a trial,” he said.

“So, we’re certainly not going to the BTC Cup confident, but I think he will run well and then get closer to his top by the Doomben 10,000 and peak for the Stradbroke ($15).

“We know he will be plenty hard to beat in a race like that if he gets back to his Sydney form.”

Top rider James McDonald gave up his rides mid-week at Warwick Farm in order to nurse his injured knee.

The Godolphin stable rider strained a hamstring ligament during barrier trials on Tuesday and he is hoping to ensure the injury won’t rule him out of Saturday’s big meeting at Doomben.

McDonald will partner Godolphin sprinter Knoydart ($17 at CrownBet.com.au) in the BTC Cup and also Foreteller in the $650,000 Doomben Cup, one of five runners for trainer Chris Waller.

McDonald is currently $4 to win the most Group 1’s of any jockey this season. The current leader is Hugh Bowman at $1.20 with any other individual paying a massive $101.

The exotic market was opened by Sportsbet.com.au at the start of the season, but it will likely come down to a two-rider race.