The horses to watch at the Group 1 2015 Golden Rose 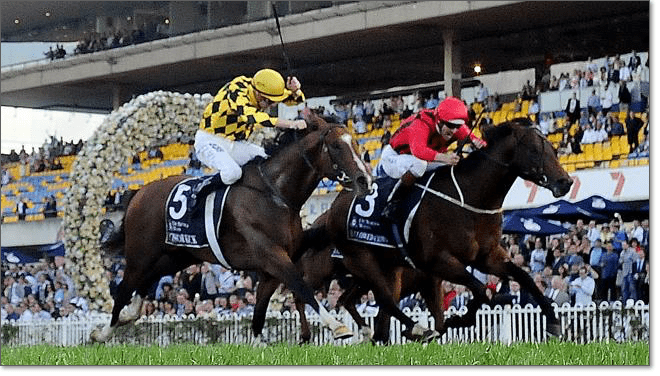 THE Group 1 Golden Rose at Rosehill this Saturday has attracted only a small field of nine runners, but there is some quality entrants and we’ll break down each runner in our analysis.

The market has been dominated by three runners; Press Statement, Exosphere and Speak Fondly. All three runners are paying under $4.30 at Sportsbet.com.au, which should make for an exciting race.

There are plenty of outside chances that haven’t earned respect from punters, but this race looks primed for an upset as the difference in quality from top to bottom isn’t overly big.

We’re not surprised of the three-horse war that is dominating this market, but we are mildly surprised that the John O’Shea-trained Exopshere is the favourite.

Exopshere has only failed in two runs to date and both came on a good track. With sunny weather and a hard track expected, we’re very surprised that this clear wet-tracker has come up the $3.10 favourite. To the punters credit, it has drifted out slightly from $3, but there are too many doubts about the track for it to get our money.

The son of Lonhro finished last at Rosehill five starts back on a good track before winning back-to-back on a soft surface. It then ran last in the Group 1 Golden Slipper because the track was too firm for its liking.

Press Statement brings in more rounded and consistent form after running second behind Exosphere on a soft track last start.

The Chris Waller-trained three-year-old was unbeaten in three previous starts which included the Group 1 J.J. Atkins at Doomben. It defeated race rival Shards by half-a-length at Rosehill prior and it gets some weight relief after carrying 60kg last start.

It wasn’t able to match Exopshere’s good turn of speed last time out, but with that run under its belt, expect a much better effort.

Speak Fondly has been very well backed after winning the Group 2 Furious Stakes at Randwick last start. The Gai Waterhouse-trained runner opened at $4.80 and has been smashed into $4.20 at Bet365.com on the back of much hype from its trainer.

It has the ability to set the pace and kick strongly in the straight and the only worry is that it’s a filly taking on the boys, but jockey Kerrin McEvoy is adamant it has the physical attributes to cope.

“This is another step up, but she is a big, strong girl and has been beating the fillies easily,” McEvoy said.

“Initially I was wary of 1400 metres but, with a couple of runs under her belt, she should run it out no problems.”

McEvoy is disappointed to not be riding the Northern Meteor filly – replaced by Brett Prebble due to prior commitments.

“Obviously, I’m disappointed not to be on her in such a big race but I had already taken rides at Flemington because the Golden Rose wasn’t originally on Speak Fondly’s program,” McEvoy said.

“But if she can do the quick back-up I’m sure she will run a really competitive race.”

There are a few upset chances in the 2015 Golden Rose, but the marker would suggest they only have a small chance of causing the boil over.

We first want to highlight Gold Symphony which has won three from four starts in Melbourne. The Peter Moody-trained colt won by two lengths on debut before running second behind Jalan Jalan at Flemington. It’s last two wins have come at Group 3 level and it defeated Golden Slipper place getter Ready For Victory last time out.

That should be good form for this, seeing as Ready For Victory would be on the fourth line of betting, but Gold Symphony is getting no respect at all by bookmakers and punters.

Despite drawing the inside barrier, it is currently paying $26 for the win and $5 for the place at CrownBet.com.au. Jockey Tommy Berry has a great record in sprinting races and even though it will be tough to win a Group 1 in your first campaign, it doesn’t deserve to be such an outsider.

Shards is currently paying $12 after winning a good lead-up race at Randwick. The second-string John O’Shea runner has looked impressive over its last couple and champion jockey Joao Moreira takes over the riding from James McDonald.

“We are looking to have three runners in the race and securing Joao is a huge asset,” stable representative Darren Beadman said.
Shards has the ability to sit on the pace and provide a solid kick in the straight, so the $12 available looks like good value.

Make sure you read these before placing a bet in the 2015 Golden Rose this Saturday. Although history is there to be broken, these statistics don’t lie and could keep you from making a bad bet.

There hasn’t been a favourite win the Golden Rose since Denman ($2.30) won in 2009 for Peter Snowden. Only one favourite has placed in the past five years, so keep an eye on which of the three favoured runners will start as the favourite.

Of those beaten favourites, Bring Me The Maid finished eighth behind Hallowed Crown, Fast ‘n’ Rocking finished tenth behind Zoustar and Masquerader disappointed when seventh behind Toorak Toff in 2010.

Fans of Speak Fondly will want to look twice at this stat before placing a bet on the Gai Waterhouse-trained runner.

There have been 29 fillies to contest the $1 million feature race at Rosehill and no filly has ever won. In fact, only two fillies have placed in the Golden Rose so that doesn’t bode well for Speak Fondly.

Based on these facts, Press Statement looks to way to go providing it doesn’t start as favourite.

Press Statement is currently $3.60 at Sportsbet.com.au.