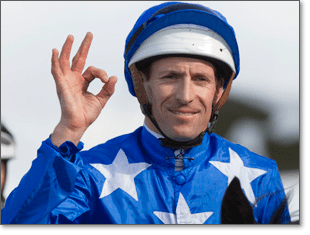 THERE are only two days left for a trio of riders to capture the Sydney jockeys’ title.

After four winners on Wednesday at Warwick Farm, Hugh Bowman skyrocketed himself to the top of the leaderboard over James McDonald and Blake Shinn.

McDonald, who left for Europe earlier this season, came back with only a couple weeks left in the season and is paying the price for it.

McDonald had a lead heading into last Wednesday, but was overhauled by Bowman, who now heads the betting at Sportsbet.

Hugh Bowman is in the box seat as he is guaranteed more rides than McDonald and Shinn. Bowman has a full book of rides this Saturday at Canterbury and he has six bookings currently for the following Wednesday.

McDonald has only five rides this Saturday and only three for the following Wednesday. The Godolphin rider has the best winning strike rate at Canterbury, but he will need to be firing on all cylinders.

Shinn isn’t without a chance with six rides on Saturday and five on Wednesday. Shinn has had 96 rides at Canterbury this season for 15 wins.

Bowman looks the value at $2.10 with Sportsbet.com.au and he’s paying $1.90 at other agencies.

Burbero on path to Epsom Handicap

The Bjorn Baker-trained Burbero is on a path to the Group 1 Epsom Handicap with a run at Canterbury this Saturday.

The improving runner is entered in the July Cup over 1100 metres and Baker never thought it would be good enough to run within 2.75 lengths of the winner in the Group 1 George Ryder Stakes last campaign.

“No and he went super in that race,” Baker said. “He was a revelation last time in and if he can continue on with that then we’ll have more fun with him for sure.”

The six-year-old kicks off its new campaign on Saturday and the field only features a handful of other runners.

“He often needs a run or two so we’ll just see how he goes on Saturday but he’s going well and he’s definitely fitter than what he’s previously been first up.

“I just think probably the distance and being first-up will be against him.”

Burbero is currently a $12 chance at Sportsbet.com.au this Saturday with the current favourite Brook Road at $2.70.

Joe Pride described Painte as a pussycat, but the youngster proved far too good for rivals at Warwick Farm on Wednesday.

Pride trained a double with Kanji winning over 2100 metres and the win took him two wins clear of his nearest rival Hawkes’ racing for the trainers premiership. Pride currently sits in fourth position behind Chris Waller, John O’Shea and Gai Waterhouse.

“To finish fourth would be a big achievement,” Pride said. “It’s as high as we can go when you look at the three stables that are above us.”

Painte turned around its consistent form with an effortless six-length win on Wednesday. Blake Shinn pushed Painte forward and it only extended its margin in the straight.

“I had him down as a bit of a pussycat up until today but ridden a different way obviously made the difference,” Pride said.

“He’s been holding back all preparation so it’s good to see him do it.

“All credit to Blake [Shinn]. He had a plan and executed it beautifully.”

The win pushed Blake Shinn to equal wins with James McDonald for the jockeys’ premiership, but he still sits behind leader Hugh Bowman.

“We weren’t taking any prisoners today,” Shinn said. “When I rode him here two runs ago he didn’t commit.

“I let him stride today and didn’t give him the chance to think about it. He enjoyed it.”