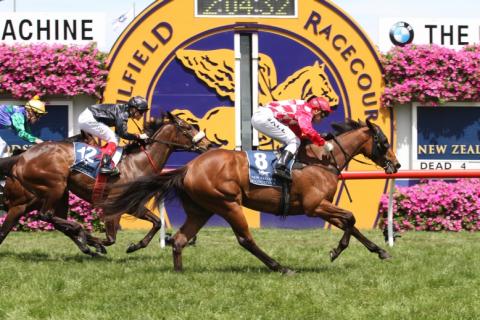 That number represents almost one-fifth – an even greater benchmark – of the 221 total entries the club received for its flagship event, itself an uplift of 48 on the 173 recorded last year.

30 are trained in the United Kingdom, four in Ireland, five in France, three in Japan, and one in Hong Kong.

Melbourne Racing Club Chief Executive Officer, Brodie Arnhold, lauded the result as a reward for the club’s recent, concerted focus on the race, its conditions and promotion on a global scale.

“At the beginning of the year, we resolved to make a concerted effort to grow the Caulfield Cup on both local and international levels,” Arnhold said.

“The ensuing facelift injected $500,000 in prize money to the race to bring its total purse up to $3 million, altered the conditions to pay prize money down to tenth position, and revised a series of international races whose winners would earn ballot and fee exemption for the Cup.

“Then, in conjunction with Leigh Jordon and the team at Racing Victoria, we embarked on an enhanced recruitment strategy that we’re delighted to say appears to have paid dividends.”

The world’s richest handicap over the classic mile-and-a-half distance, the Caulfield Cup has been won by Northern Hemisphere-trained horses three times previously: Taufan’s Melody (1998), All The Good (2008), and most recently by Dunaden two years ago.

Late nominations for the 2014 Caulfield Cup, to be run on October 18, close on August 26, with the release of weights following on September 3.