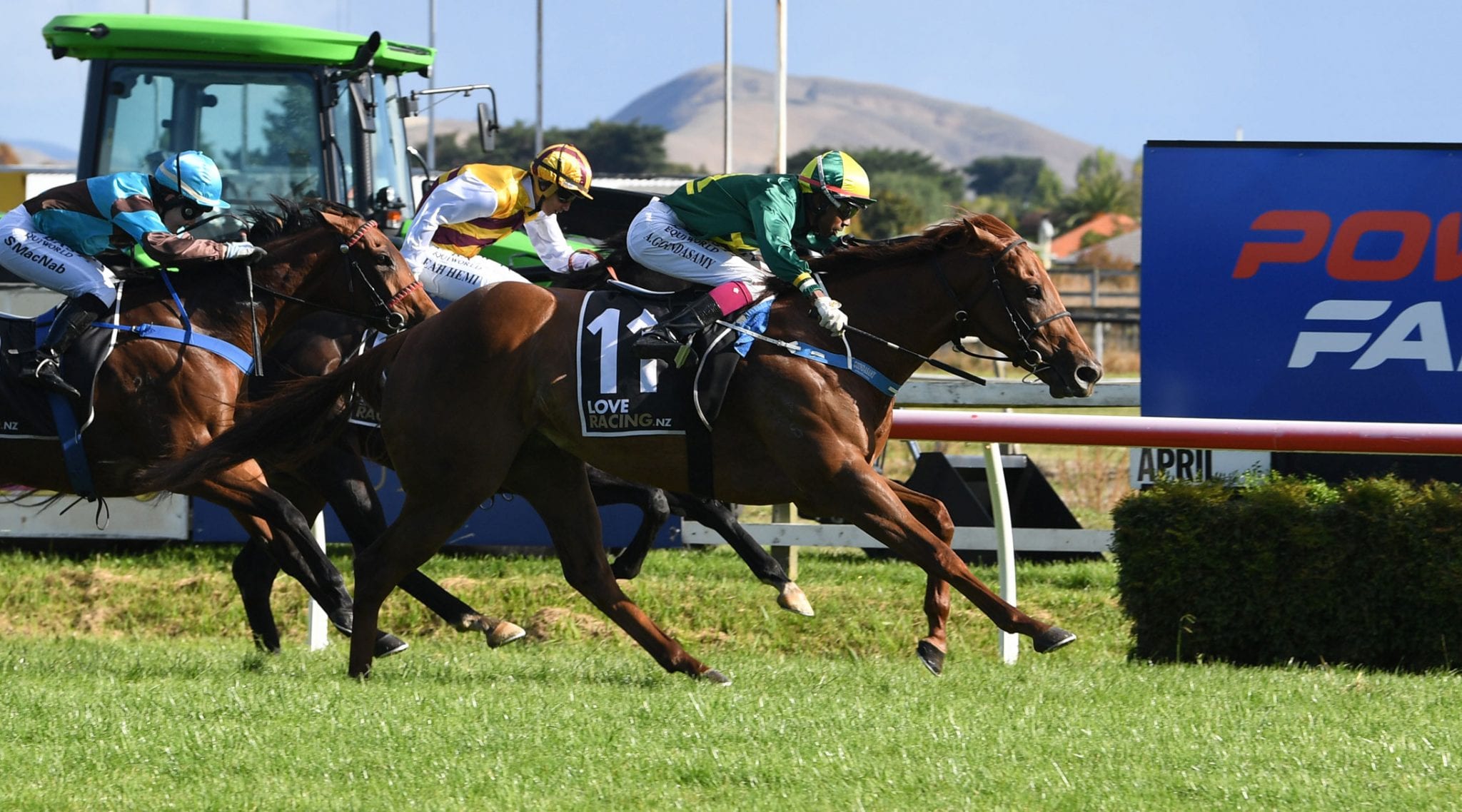 Matamata visitor Roch ‘N’ Horse put a disappointing last start performance behind her when she produced a powerful closing burst to take out the Listed Power Turf Sprint (1200m) at Hastings.

It was the first stakes victory for the Mike Moroney and Pam Gerard-trained four-year-old after she went within a nose of achieving that goal two starts ago when narrowly defeated in the Listed Lightning Handicap (1200m) at Trentham.

In between times she had finished well back on an unsuitable Slow9 surface over 1400m at Awapuni but relished the return to better footing at Hastings (Dead5) in the hands of apprentice Ashvin Goindasamy.

Goindasamy had the Per Incanto mare travelling sweetly in midfield throughout before tracking into the race approaching the home turn. Angled to the middle of the track Roch ‘N’ Horse balanced up nicely before letting down strongly at the 200m as she raced clear of Mr Universe and What A Smasher for a decisive one length victory.

Gerard has always held an opinion of the mare, who has proved troublesome due to issues with shin soreness in her early days.

“She has had some immaturity problems but has come right with age and some time on her side,” she said.

“We were having trouble working her as she kept going shinny after her races.

“We had to nurse her along in those early starts, but as she has matured, she has gotten better and better.

“She is a very honest mare who puts in one hundred percent every time she steps out.

“The good thing is that she has proved herself at this level and we now know what we can look towards in her next campaign, where she should have enough rating points to get into the better races.

“We’ll put her out now as she won’t handle the tracks any worse than what she struck today.”

Gerard was also pleased for Goindasamy, who she believes is a rider of real promise.

“Ashvin did a great job today as he didn’t panic from the wide draw,” she said.

“He worked her across to a nice position in midfield and had plenty in hand when he did ask her for the effort in the home straight.

“It was a well thought out ride by an apprentice and we couldn’t have asked for anything more.

“I think he has the right attitude and ability to go a long way as he does his homework and knows his form very well.”

Bred and part owned by the Little Avondale Trust, Roch ‘N’ Horse is a daughter of Cecconi mare Rochfort and hails from an extended family that includes well performed stakes winners Weissmuller and Travolta along with multiple Group One placegetter, Harlow Gold.