Odds, form and picks for the 2015 Golden Slipper 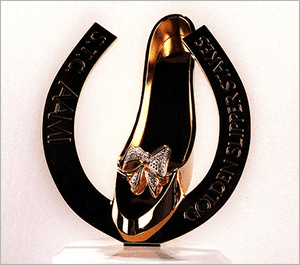 THE Golden Slipper is one of Australia’s most iconic horse races as it captures youth, speed and the power of the thoroughbred.

The richest race for two-year-old’s in the world at $3.5 million, the 1200 metre sprint has been won by many champions of the turf and has often been regarded as one of the toughest races to win anywhere in the world.

The field of 16 will take their place at 4:30pm on Saturday and we’ve compiled a runner-by-runner guide to which horses have a shot at winning the Group 1 feature and which horses are just making up the numbers.

The Gai Waterhouse-trained Vancouver will carry the number one saddle cloth and that’s where we start.

When the barrier draw came out, Vancouver’s bookmaker price drifted from $2.50 to $3 but many punters still believe it is the best horse in the field.

Unbeaten in three career starts, including a victory in the Group 2 Todman Stakes by 3.25 lengths, the son of Medaglia D’oro has the world at its feet and if jockey Tommy Berry can find a place in the field that isn’t too wide around the turn, then it should be in the mix.

Barrier draws can make a big difference in deciding which horses to back, so treat Vancouver’s wide draw warily and keep an eye on its market price throughout the day.

It was only a fortnight ago that Headwater was the firm favourite for the 2015 Golden Slipper, but one bad run can change the entire market structure, and that’s what happened with Headwater.

The Hawkes’-trained colt won its first two career starts in very good fashion and went into the Todman Stakes as a $1,75 odds-on favourite. The Exceed And Excel colt failed to keep up with Vancouver after being posted three wide throughout the trip but it didn’t show much fight in the final stages.

Headwater is now paying a very good price and represents big value. It’s a classy looking colt and it wouldn’t be wise to leave it off your ticket.

Furnaces kicked off its career with a bang when winning at Rosehill by 6.25 lengths and quickly becoming one of the front runners for the Golden Slipper. A second placing in the Listed Lonhro Stakes behind race-rival Haptic at odds of $1.65 burned a hole through punters wallets but it was brave in defeat when second to Vancouver last start.

John O’Shea has never won this race which counts against him here but drawing the inside barrier is a massive assist and this two-year-old has the necessary pace to use that to its advantage.

Hugh Bowman takes the ride and he knows what it takes to win a major race in Australia so don’t overlook its chances.

This John O’Shea-trained colt could well be the overlooked runner of the field and it’s paying very good money at this stage.

The colt by Exceen And Excel is unbeaten in two starts which included beating stablemate Furnaces by just under a length at its last start. It has drawn favourably in barrier three and it gets a top international jockey in the saddle with Godolphin’s James Doyle.

This colt is tough and has yet to taste defeat so whilst not one of the strongest winning chances, definitely include it for the minor money.

The best of the three O’Shea runners, Exosphere amazingly sits as the second favourite despite running last of seven runners on debut at Rosehill.

The son of Lonhro has won its next two starts by a combined winning margin of 8.25 lengths and many punters have been betting it since being included into the market.

It looks to have plenty of raw power and jockey James McDonald got the pick of which O’Shea runner to ride and he chose Exosphere. That’s a big sign and it is the biggest danger to the favourite.

Having had its debut run only two weeks ago, the Mick Price-trained colt was a surprise inclusion into the Slipper but its debut win was very impressive.

It won the Listed Festival Stakes at Flemington by running down the highly-touted Heatherly and it ran a time of 57.72 for the 1000 metres which suggests the son of More Than Ready has some serious toe.

Like the name suggests, it is ready to win this race and its a very strong looking colt which will help in this situation. The bookmakers haven’t been able to let it drift in the market which suggests there is good support around for this classy looking colt.

Ryan Moore may have won the Cox Plate and the Melbourne Cup, but he can’t automatically make Odyssey Moon a winning chance in the Golden Slipper.

Trainer Rodney Northam paid the hefty late nomination fee but the bookmakers feel as though the son of Snitzel isn’t a realistic winning chance in the race.

It won nicely on debut and has finished in behind some quality types including Exosphere and Tarquin, but winning the Slipper seems a touch ambitious and the odds reflect that.

Gai Waterhouse knows how to train a winner of the Golden Slipper and she has yet another good chance with debut winner English.

One of a handful of fillies in the race, English is the daughter of Encosta de Lago and it looked impressive when winning as the favourite at Randwick last start when beating Ottoman.

It obviously owns plenty of ability but this race might be one step too far as the size difference between the colts and fillies is evident. Expect a solid run from a good draw but the place money seems best at this stage.

It’s never easy to break your maiden status in the Golden Slipper but that’s what Reemah is trying to do here for trainers David Hayes and Tom Dabernig.

The two-year-old filly almost caused a massive upset at odds of $101 in the Group 1 Blue Diamond behind Pride of Dubai but it is yet to cross the line first and that will to win is what’s missing from its form line.

Drawing wide means it will likely head back and look for some luck in the straight but we can’t have it in our calculations at this stage.

As its form suggests, this Northern Meteor filly has progressively improved in two campaigns and its win last time out in the Group 2 Magic Night should warrant respect in this.

It finished third on debut behind a subsequent winner and its effort in the Group 2 Sweet Embrace behind Always Allison suggested that it has some fight in it and that showed by winning last time out.

Gai knows how to train them and even though Oliver isn’t riding in his career best form at present, he is good enough to guide it from an outside barrier and give it a chance in the closing stages.

Fireworks got out to $41 in the market but has since firmed back into its opening price. The Gerald Ryan-trained filly represents very good value at $34 after working to the line nicely in the Group 2 Reisling last time out at Randwick.

Its win the start prior suggested that it has some ability and it always finds the line very well – a good trait of any Golden Slipper winner.

Some may overlook it simply because of its price, but we think it is a legitimate winning chance and its odds for the place will be very appealing.

As the long odds suggest, bookmakers don’t have a high opinion of Haybah and even though it has already won twice in its career, punters don’t want any of the action either.

The More Than Ready filly finished four lengths behind Headwater on debut and it hasn’t put in a bad effort since, however, none of its runs have suggested it’s good enough to win a Golden Slipper, hence the $67 price tag.

The good draw helps its chances but it might pay to leave it out of calculations.

It wasn’t that long ago that Ottoman was the clear favourite for the Slipper after winning impressively on debut, the the third of John O’Shea’s runners has failed to live up to expectations since.

The form hasn’t really been franked from that debut effort which is concerning and it’s only a small-framed filly which doesn’t help in this race.

International rider William Buick comes over for the ride but it is the lesser fancied of the three Godolphin runners.

As the market suggests, Lake Geneva is a good winning chance despite having never won a race. The Fastnet Rock filly has had two runs for two placings and it put in a massive finish to run third in the Blue Diamond last start.

A similar effort is needed here but it has drawn closer to the rail for this and it gets in with a nice weight of only 54.5kg.

It is many punters outside chance and it represents good value at the $17 quote which could drop closer to the starting time.

Single Gaze has looked good in four career starts but that form hasn’t come against any horses of note and this is a big rise in class for the Canberra-trained filly.

It finished second behind Takedown in the Black Opal last start which was enough to secure a spot in the race but it’s unlikely it will test these and the odds are a little under value at the moment.

Drawing wide won’t help so we’re prepared to risk it at long odds.

Lucky to get a start in the race after the exclusion of Look To The Stars but it likely doesn’t have a chance of winning regardless.

It showed good speed when winning three starts back but its form simply hasn’t lived up to expectations and this is a whole different class.