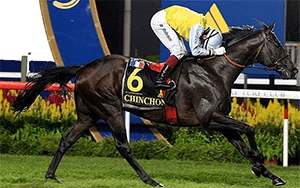 DAY two of the Singapore carnival features the Group 1 $3 million (2000 metres) and it has attracted a quality field of 11 runners.

Current $2.60 favourite Military Attack and the French-trained Free Port Lux – which is being considered for the 2015 Cox Plate – dominate the market with Meiner Frost and Dan Excel following closely in the betting.

Free Port Lux’s trainer Freddy Head is confident as it defeated subsequent 2014 Cox Plate winner Adelaide in the Prix Hocquart in France just over a year ago.

“This race will give us a good gauge how he measures up on the international stage,” Head told the Singapore Turf Club.

“If he runs well, we can still travel with him as he is only four.

The four-year-old has yet to race outside of France, but Head is excited about the future of international racing.

“Races like the Arlington Million in the US, the Cox Plate in Australia or the Hong Kong internationals could be next targets for him.

“But, let’s see how he goes here first and then we can dream bigger.”

Free Port Lux finished fifth last start at Group 2 level and its start prior was a disappointing 19th of 20 runners in the Group 1 Prix de I’Arc de Triomphe, but Head is advising punters who are taking the $4.20 at Sportsbet.com.au to forgive that run.

“Forget his run in the Arc when he ran second-last,” Head said. “He was not well the week before and I think 2400 metres is in any case the end of the world for him.

“He likes a good surface, normally runs handy, but can also take the lead if he wants, but he needs a true-run race.”

Free Port Lux drew an inside barrier of two.

“I’m happy with the draw,” Head said. “We can follow the leader.

“All he needs is pace and then we want them to come back to us.”

Defending International Cup champion Dan Excel has drawn wide in barrier 10, but trainer Gary Moore is seeing the bright side.

“I don’t think the barrier is of much concern because he has such great gate speed for a horse that races at this distance,” Moore said.

“I think he can get across and lead, then maybe box seat, like he did last year from a good draw.”

The son of Shamardal hasn’t won a race since, but it did place in the Group 1 Champions Mile at Sha Tin last start with Tommy Berry in the saddle who also partners it again.

“At his last race in the Champions Mile in Hong Kong, he led the field at the start and held it for some distance,” Moore said.

“Not the best of draws, but we are not worried.

“We’ve got the same horse that led last year [Wild Geese] drawn outside of us in 11, so hopefully he brings us across. I can see us leading for the first part and then maybe Wild Geese will push on.”

Dan Excel currently sits on the fourth line of betting at $5 with Sportsbet.com.au.

Trainer Laurie Laxon is looking for Stepitup to do just that as he seeks his first Group 1 International Cup on Sunday at Kranji.

The nine-time Singapore training champion recorded a second placing with Recast in 2008, but will be hoping to score with the $34 chance here.

The five-year-old looked to be a potential superstar after winning its first seven of eight starts before going through a tough period and switching stables.

Its win in the Group 2 Queen Elizabeth II Cup on April 26 returned confidence to the Laxon camp.

“He is in as good a condition as it gets,” Laxon said.

“His fitness is good and he worked out well this morning. I am not overly concerned about the race conditions, the competition or the barrier draw.”

“Draw is not the best, but if we can come across and tuck in behind, follow Dan Excel, who has drawn 10, and get some cover, we will be alright,” Ellis said.

“It’s all in [Manoel] Nunes’ hands now. He is the one standing in the stirrups.

“This will be his biggest test. He has improved a couple of lengths in the Queen Elizabeth II Cup.

“He will be right there.”