Melbourne spring on the radar for international star Aerovelocity 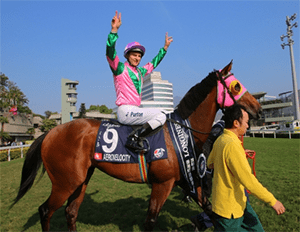 RACING Victoria’s international recruiter Leigh Jordan is hoping the prospect of a $2.2 million pay day will persuade the owners of Aerovelocity to run in the Melbourne spring carnival.

Immediately following its win in the Group 1 International Sprint last Sunday at Kranji, its trainer Paul O’Sullivan told reporters that the sprinter would not be coming to Australia.

O’Sullivan would later be explained the riches of the Melbourne spring carnival, to which the former New Zealand-based trainer started to consider a trip to Melbourne for the VRC Sprint Classic.

If Aerovelocity won the VRC Sprint Challenge it would win $600,000 for the first prize and another $600,000 bonus provided by the VRC (Victoria Racing Club) offered to any winner of a Global Sprint Series race overseas.

As if that bonus wasn’t a big enough enticement, the seven-year-old would receive a $1 million bonus from the Global Sprint Challenge for having won Group 1 Global Sprint Series races in three different countries.

“The owner is keen for Aerovelocity to run in the Hong Kong Sprint in December but there’s still plenty of time for him to run here and be ready for that race,” said Jordan.

Jordan also stated he was in talks with Dan Excel’s connections after it won the Group 1 Singapore Cup.

Dan Excel travelled to Australia for the 2014 Cox Plate, but was scratched after contracting a throat infection. It was a $26 chance with Sportsbet.com.au which will be advised on the plans of the four-time winner when they come to hand.

Murray and Harry team up for Grand Prix

Harry is the son of Sir Percy which won its first two starts before running an unlucky third last time out at Te Rapa.

Baker, who won this year’s New Zealand Derby and 2010 Victorian Derby, says that Harry should cope with the increase in distance.

“I thought it was a good run because he was the only three-year-old in a very strong field.

“It’s hard to get a line on him compared to some of my other horses, because he’s racing at the tail end of the season, but I think enough of him to have a crack at the Queensland races.”

Harry is currently being overlooked in the market. The three-year-old is paying $21 with Sportsbet.com.au which is great value.

It was drawn a touch wide in barrier 12, but international jockey Zac Purton rides and he will likely drop the talented gelding back before producing a big finish.

Michael Hawkes denies claims that “Rockhampton Rocket” Our Boy Malachi raced flat in the BTC Cup last start, and he’s tipping that Saturday is the day it becomes a Group 1 winner in the Doomben 10,000.

Jockey Tommy Berry made comment that the gelding felt flat after it finished third in the BTC Cup, but Hawkes insists it did not have an off day second up.

“I don’t read into that at all what Tommy [Berry] said and second up, third up whatever it is it was just the way the race was run,” said Hawkes.

“Swap the barriers and he would have had a softer run and it would have been a different result.

“When you are at that elite level you need everything to go right and even though it didn’t look like he was working hard he had to work to get across for the first 400 metres and you can’t do it at both ends at this level.

“His day will come and I think it might be this Saturday so long as he draws a good barrier.”

Unfortunately for connections, Our Boy Malachi has drawn barrier 12 which means it will be forced to work wide, whereas current $6 favourite Srikandi has drawn closer in barrier 5.

Our Boy Malachi is currently on the second line of betting at $7 with the John O’Shea-trained Generalife a half-point behind at $7.50.

Other top chances include stablemate Knoydart ($11), Scissor Kick ($9) and Rock Sturdy at $13.

The Chris Munce-trained Wicked Intent gives the former jockey a top chance of securing a black type win, but the punters aren’t as confident.

The two-year-old by Wicked Style was narrowly beaten last start and it looked to have returned to its early-season form.

Jockey Damien Browne will have his work cut out for him from barrier 14 and that could explain the drift in the market.

It opened at $4.20 and currently stands at $4.60 at Sportsbet.com.au, just ahead of second favourite and last start winner Blueberry Hill at $4.80.

The Richard Laming-trained Payroll was heavily backed last start at Morphettville – taking bets in excess of $5000 – but was unlucky in running second.

The daughter of Not A Single Doubt got too far back in the running, but produced a storming finish for second behind Black Vanquish.