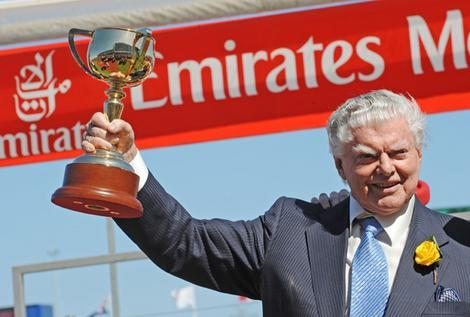 The allure of legendary horseman Bart Cummings has punters piling on Precedence to give the master trainer a record 13thMelbourne Cup, despite the horse not being guaranteed a start in Australia’s great race.

Precedence’s odds of winning the 2013 Melbourne Cup firmed from $501 into $71 at Sportingbet following his victory in Saturday’s Drake International Moonee Valley Cup. The eight-year-old remains a $71 chance at Sportingbet after receiving a 1kg weight penalty for the win, which puts him 29th in the order of entry.

“We’ve written more than double the number of bets for Precedence to win the Melbourne Cup since Saturday compared to any other runner,” Sportingbet Australia CEO Michael Sullivan said.

“I’m talking mainly $5 and $10 bets but the ticket number has been huge,” Sullivan said.

“The combination of Bart Cummings and the Melbourne Cup is as Australian as a meat pie and sauce and  if Precedence gains a start, I expect he’ll be the most popular horse in the race in terms of the number of bets written,” Sullivan said.

Fiorente is currently a $5.50 favourite at Sportingbet to give trainer Gai Waterhouse her first Melbourne Cup win.