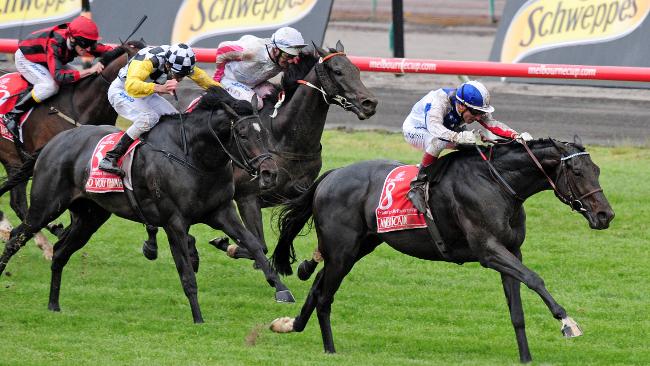 Willie Mullins already has half an eye on the Emirates Melbourne Cup as Simenon makes his racecourse return in the Weatherbys Hamilton Insurance Lonsdale Cup at York on Friday (11.30pm local).

Just as soon as the six-year-old had run the race of his life to finish just a quarter of a length adrift of The Queen’s Estimate in the Gold Cup, his trainer nominated the Spring Racing Carnival to be on his agenda.

Absent since that famous June afternoon at Royal Ascot, Simenon will not have Estimate among his six rivals in this 3200-metre Group 2 as Sir Michael Stoute is not totally happy with his filly at present.

Mullins has established an unprecedented dominance of jumps racing in Ireland with a final prize-money total last season of very nearly four times that of his nearest rival, and he saddled Hurricane Fly to win his second Champion Hurdle at the Cheltenham Festival in March.

Simenon has dipped his toe into the winter game himself but ran moderately on a couple of outings last November and December and appears a different proposition on the flat.

Mullins hopes the gelding will have a high enough rating for Flemington, and said: “We’re planning it as if we are going to get in the Melbourne Cup and we’ve entered him up in all the prep races out there.

“It does depend on how he gets on at York, though.

“He has had a break as we were looking towards the end of the year but I’m very pleased with him and everything seems to be going well.”

Last year’s Gold Cup hero Colour Vision has been struggling despite running fourth in the defence of his crown and he put in a curious showing from well off the pace in the Goodwood Cup before staying on for seventh.

Of more interest for Flemington could be his younger Godolphin stablemate Ahzeemah, who was beaten only by Brown Panther at Goodwood and had earlier filled the same position behind Universal in the Princess Of Wales’s Stakes (2400m) at Newmarket.

In a nine-race streak stretching back over a year, Ahzeemah has never finished outside the first two and would be among the royal blue team’s candidates to join last weekend’s Newbury winner Royal Empire on the plane.

Richard Fahey has always had the Cup at the back of his mind for Glen’s Diamond, one of six rivals for Simenon, but has been frustrated by his gelding’s inconsistency.

So assured when landing the Yorkshire Cup (2800m) on this course back in May, the Jekyll and Hyde character has shown his worst side on his two most recent appearances by barely featuring either at the Curragh or in the Goodwood Cup, but a better performance here could yet change the prolific trainer’s mind.

Caucus chased home Estimate when the pair appeared for the season over this trip at Ascot and went on to notch a Listed victory at Sandown, but he too was ordinary in the Goodwood Cup.

Standing in all of their way will be last year’s winner Times Up, the hardy seven-year-old who found a new lease of life in the closing stages of the career of his veteran trainer John Dunlop.

Now in the care of Dunlop’s son, Ed, Times Up was tailed-off in the Gold Cup and needs yet another resurgence to feature, as will Askar Tau.