Lankan Rupee to be tested in TJ Smith Stakes 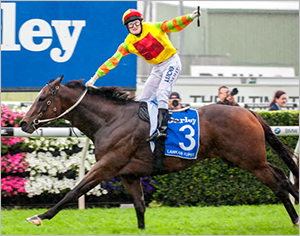 THE world’s highest-rated sprinter is set to be tested in the Group 1 TJ Smith Stakes (1200 metres) at Randwick this Saturday.

The Mick Price-trained Lankan Rupee won the Lightning Stakes in fine style earlier this preparation, but failed to live up to expectations in the Newmarket Handicap when sixth behind Brazen Beau.

The five-time Group 1 winner pulled up with a strained pectoral muscle and Price believes there is only one way to determine if Lankan Rupee is over his issues and that is by running it against the very best Australia has to offer.

The five-year-old has undergone treatment for the problem and Price said the son of Redoute’s Choice showed no signs of the injury in a Caulfield gallop on Saturday morning.

“He went good. Smithy [Dale Smith] rode him and he’s due to have another gallop on Tuesday,” Price said.

“I think with the recovery it’s something that you won’t know until race day, but he’s had treatment and I think he’s pretty right.

“He’s as right as I can have him, but there’s only one pressure that will test him and that’s race day pressure.”

Lankan Rupee is currently on the third line of betting at $6.50 with CrownBet.com.au.

The Hawkes’-trained Chautauqua is the current favourite at $3 with the Joseph Pride-trained boom sprinter Terravista sitting at $3.50.

Recent Group 1 winner Sweet Idea has improved greatly this season and the bookmakers aren’t leaving the Gai Waterhouse-trained runner out of market calculations. It currently stands as a $9 chance, but is expected to firm throughout the week.

Other strong chances include last start Moonee Valley winner Lucky Hussler ($17) and Miracles Of Life ($26), which was storming home last time out.

Catkins is still looking for its maiden Group 1 win but the Chris Waller-trained mare looked impressive last week when winning the Group 2 Emancipation Stakes and if it gets some luck in the running, the $34 available at WilliamHill.com.au is massive value.