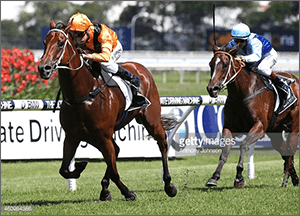 TRAINER Joe Pride contested last Saturday’s Group 3 Hall Mark Stakes at Randwick with four runners and whilst they were no match for Our Boy Malachi, they will now forge onto the Brisbane winter carnival.

Four-year-old Craftiness finished runner up to Our Boy Malachi – which has now won 17 from 19 and heads the Stradbroke Handicap market at $4.50 – and the Starcraft gelding took its career record to eight starts for six wins and two seconds.

“I have plenty of options with him. I am plotting a path towards the Stradbroke, so he could stay here or go straight to Brisbane for the Group 3 BRC Sprint at Doomben on May 9.”

Craftiness is currently $11 with Sportsbet.com.au for the Group 1 Stradbroke Handicap on June 6, on the fifth line of betting behind Our Boy Malachi, Bring Me The Maid ($9), Lucky Hussler ($9) and Srikandi at $10.

Stablemate Rock Sturdy resumed its new campaign with an eighth in the Hall Mark after an injury kept the talented runner on the sidelines.

“He didn’t like the track on Saturday, but his effort was encouraging. He’s come through it well and I will take him to Doomben on May 9 for either the Group 1 BTC Cup or the BRC Sprint,” Pride said.

Eight-race winner Target In Sight finished on well for sixth, but Pride thinks its best effort come on dry tracks.

“Dry tracks are best for him so there is the Ortensia and Luskin Star at Scone,” Pride said.

Rain Affair led the field into the straight in the Hall Mark, but the seven-year-old is struggling to find its best form, but Pride admits the aptly-named Rain Affair needs a wet tracks.

“Nothing set in stone. Basically I will go where it’s wet,” Pride said.

Pride also nominated Ball Of Muscle as another contender for the $2 million Group 1 feature.

It might not be the best VRC St Leger field we’ve seen, but there are still plenty of betting opportunities out there, especially with General Zabeel.

The John Thompson-trained gelding has been targeted for the longer distances right from the word go, and was even nominated for the 2015 Melbourne Cup.

The son of Zabeel has won once from five starts, which came last time out at Goulburn by 2.5 lengths. The field wasn’t up to this level but the increase to 2800 metres will suit and it looks a natural stayer in the making.

The three-year-old is royally-bred out of Carib and this field doesn’t have any superstars in it. Current favourite is All I Survey, which has won only once from six starts for long-distance specialist Pat Carey.

The Domesday gelding won by six lengths at Terang two starts back but was no match for Manapine and Oncidium Ruler last time out at Flemington.

Pat Carey is a master trainer of stayers so that makes All I Survey the major threat to General Zabeel.

Moreira wasn’t able to demonstrate his best riding skills when at Randwick for The Championships, but he hasn’t had much trouble racking up wins in Hong Kong.

There is currently 29 wins separating Moreira and Zac Purton on the Jockeys’ Premiership leaderboard after Moreira scored a double at Happy Valley yesterday.

The only other jockeys to reach 100 wins in a season in Hong Kong were South African Douglas Whyte and Purton.

Moreira admitted reaching triple figures has been a “hoodoo” number for him but was delighted to score the win aboard the Chris So Wai-yin-trained Win It.

“With Win It, we won it,” Moreira told the South China Morning Post.

“I got stuck on 99 when I was in Brazil and Singapore as well.

“But I was happy to get past it tonight [Wednesday] because I have some big rides coming up in the next two weekends and I want to be concentrating on winning on Designs On Rome and Able Friend, not thinking about whether I get to 100.”

Designs On Rome is currently $3 at Sportsbet.com.au to win the QEII Cup this Sunday at Sha Tin.