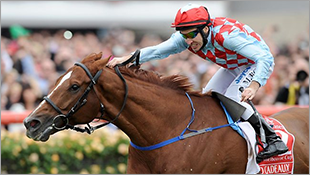 TOP international raider Red Cadeaux has bowed out of the Group 1 BMW at Rosehill this Saturday and will instead head to the Group 1 Sydney Cup on April 11.

Red Cadeaux finished a stylish fifth in the Group 1 Australian Cup earlier this month behind Spillway and was set to run over the 2400-metre feature at Rosehill but trainer Ed Dunlop will save his champion for the second day of The Championships.

Hugh Bowman has been confirmed to ride the three-time Melbourne Cup placegetter for the Sydney Cup where it is currently an $8 chance with CrownBet.com.au.

The Anthony Cummings-trained Fiveandahalfstar will also be a notable absentee from The BMW after suffering from a cough.

The 2013 winner hasn’t returned to the form which seen it win the weight-for-age race but hopes were high that it would improve with more racing this season.

The five-year-old is nominated for the Queen Elizabeth ($51) and the Doncaster Mile where it currently sits as a distinct outsider at $67 with Sportsbet.com.au.

Betting for The BMW is currently suspended*

The Brazilian will ride the Gai Waterhouse-trained mare ($11 at WilliamHill.com.au) in the Group 1 TJ Smith (1200 metres) on April 4 which boosts his already impressive book of rides. Moreira secured the ride due to Blake Shinn’s suspension for day one of The Championships.

Moreira will also partner the smart filly Pittsburgh Flyer in the Group 3 PJ Bell over 1200 metres.

Many believe the country and provincial-trained horses should be accompanied by jockeys from those areas, but those same jockeys are unlikely to get another ride that day, therefore, the decision was made to allow any jockey to ride the horses.

Moreira will partner the Paul Messara-trained Tarangower which currently holds favouritism for the Country Final at $4, marginally ahead of the well-fancied Voodoo Lad.

Parraay will enjoy his services for the Provincial Final but still remains on the fourth line of betting at $9 as Sure And Fast continues to be well supported at $3.50 with Sportsbet.com.au.

Before the action at Rosehill this Saturday begins, Moonee Valley is boasting an impressive card this Friday night which features the Group 1 William Reid Stakes.

The race features six Group 1 winners but it’s Angelic Light that holds favouritism at $5.50. The Robbie Griffiths-trained mare is top pick to grab its first major win over champion two-year-old Earthquake at $6.

Talented runners such as Rebel Dane, Vain Queen and Trust in a Gust all sit further down the bookmakers list which poses great early betting value.

Peron was seen running on well last time out and it currently stands at $15 in the market with Sportsbet, but punters fear the Moonee Valley track won’t suit.

Jockey Billy Egan has copped a two-week suspension after weighing in overweight on a horse that was only narrowly beaten at Kyneton last Sunday.

Egan teamed up with the Enver Jusufovic-trained Aristides in the Sportsbet All New Cash Card Rating 58 Handicap in which the gelding finished a half-head behind winner Luskin Belle.

Luskin Belle moved from $4.60 to $7 after easing significantly in the market and Aristides also drifted from $6.50 to $7, but punters were left scratching their heads upon the stewards’ inquiry.

Egan weighed in 1.2kg over the allotted weight and a stewards’ inquiry quickly took place which deemed a lead bag had been inadvertently added to Aristides saddling gear.

Stewards took into account that the error cost Aristides the win before suspending Egan from March 24 to April 8.